The GeoEnrichment Service has been recently upgraded to a next generation version, bringing with it significant performance improvements. This blog post provides some details, but before we begin let us briefly describe “data enrichment”.

GeoEnrichment is a service on the ArcGIS platform that provides the ability to get facts about a location or area. It enables you to answer questions about locations that cannot be answered with maps alone. For example: What kind of people live here? What are their habits and lifestyles? What kind of businesses are in this area? GeoEnrichment uses the concept of a study area to define the location of the point or area that you want to enrich with such additional information. For a location, or a set of locations, you can apply a desired ring buffer size or create drive-time service areas around the point(s). Alternatively, you can define a study area using administrative boundaries (e.g. ZIP Codes, Counties) or custom polygon(s).1

While you may develop your own custom apps to leverage GeoEnrichment, several premium applications from Esri already do so in different ways. Following are some examples, all of which will benefit from the improved response times delivered with the recent upgrade to the service. 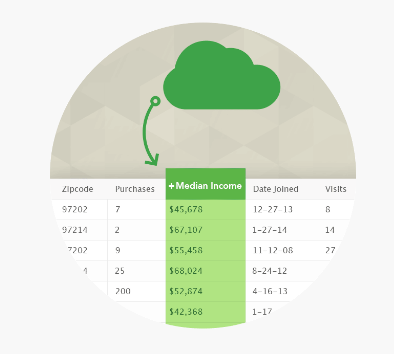 In each of the above examples, the data enrichment query, via the app, ultimately takes the form of a GeoEnrichment request for one or more variables for a set of multiple administrative boundaries. The performance increases now deliver faster response times for such enrichment requests. Benchmarking, conducted by the GeoEnrichment team, indicates that the performance improvements deliver a reduction in response time from ~80% (when enriching 100 features simultaneously) to as much as ~99% when enriching a single feature! The following table has some details of the measured performance improvements for the several benchmarked requests. 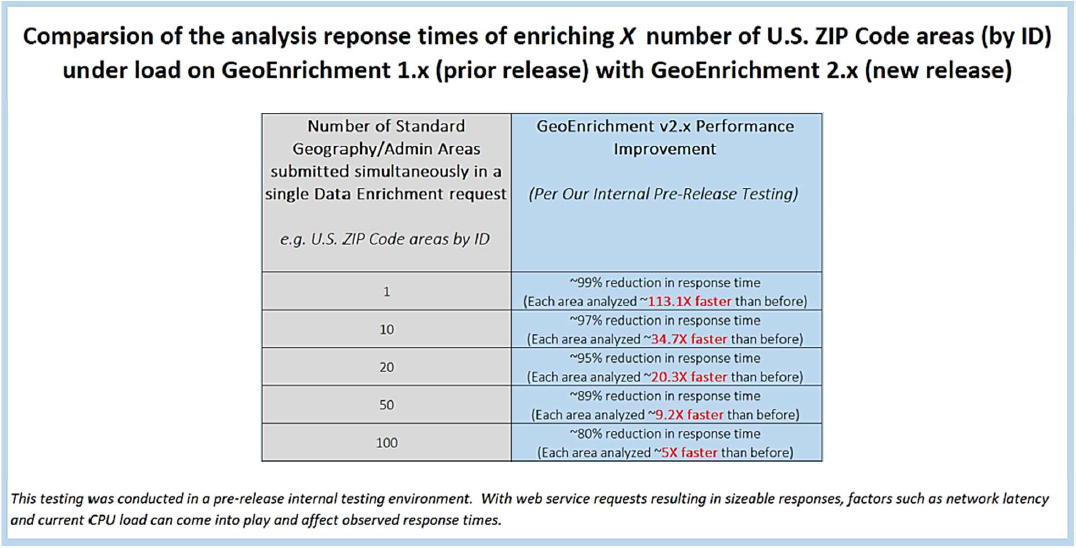 Improvements are also experienced in retrieval times of data collections – used by GeoEnrichment to group data variables by particular themes such as “Housing” and “Spending”. 2 Users of the BA Web app may have noticed that logging in is now faster. Previously, the loading animation screen would be displayed for over 30 seconds, while the the app was querying GeoEnrichment for all the data collections to populate the Data Browser widget. With the improved response time after the recent upgrade, this screen is seen for between 7 and 15 seconds, thus cutting the time to about one-third!

The ability to process large requests has been greatly improved. For example, when using the Enrich Layer tool prior to the recent upgrade, an enrichment request – retrieving 85 variables for over 4000 Census Tracts, resulted in an error message and a failure to generate output. The same request now finishes as expected without any problems. 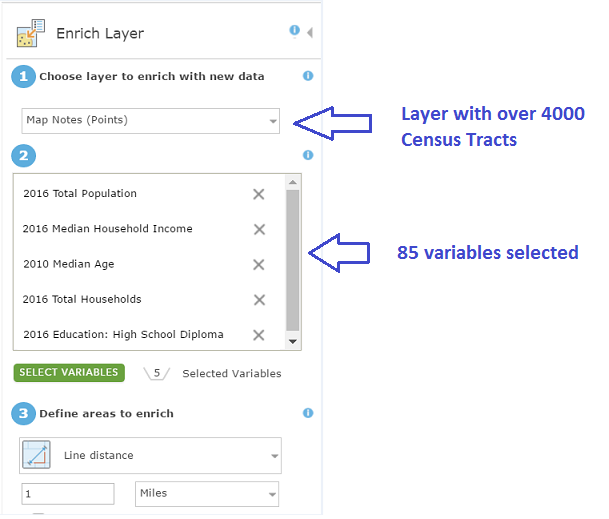 Lastly, these performance improvements also deliver some indirect benefits in the form of increased stability and scalability, as well as maintainability of the GeoEnrichment Service (by the Esri team), resulting in improved overall experience for users of apps that consume the service.

1 For a more detailed overview, please refer to the following documentation: https://developers.arcgis.com/rest/geoenrichment/api-reference/geoenrichment-service-overview.htm

2 For more detailed information, please refer to the following documentation:

I am a Product Engineer and Writer at Esri, focused primarily on the Business Analyst applications for web, mobile and desktop.