Collector for ArcGIS is adding exciting new capabilities to the next release that let you map your asset data (hydrant, meters, valves, pipes, signs, and more) with a precise spatial location.  Travis Anderson, an engineer with Le-Ax Water District in Ohio, is taking advantage of our very active beta program to get a head start on marking assets this summer.

When Travis started as a district engineer in the fall of 2009, equipped their maintenance crew with rugged handhelds and sent them out to mark locations. The crew struggled with the devices where in some instances Travis said “they would be ready to backfill a trench after a repair and would be waiting for minutes to get an accuracy level to take a point.” This left a negative impression of GIS within the district.

Travis is self-taught when it comes to GIS and it’s a small part of what he does within the Water District. 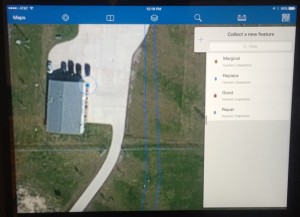 He made their first web map in December of 2014 and started by uploading shapefiles. After a little more reading he started creating hosted feature layers and started putting together the first layout of their system. For how little Travis feels he knows about GIS, he said he was surprised at how easy it was to get up and running but also tailor it to their own preferences.

However, what really changed everyone’s attitudes toward GIS was the use smartphone and tablet devices. With their iPads, they starting creating a photo inventory of valves but knew they could do much more. Travis said, “When Collector came out it was a no-brainer for me.” They could email staff in the field, retrieve information, take pictures, etc. The iPads just had so much more capabilities than the traditional GPS handhelds. Once Collector had the ability to take maps offline, it became a matter of just getting an accurate external GPS receiver to work with the iPad.

Their maintenance crew grew comfortable using Collector on the iPads. Le-Ax got more serious about external receivers last year. After looking at several GNSS units, they settled in on the Eos Positioning Arrow 100. They have been using since October and find it has been working well with the iPad and Collector. They plan on buying another Arrow 100 soon. That way their field crew will have one, and the two meter readers that will be providing additional maintenance to the system will have one. They use the Ohio Department of Transportation’s RTK network (when they have a data connection).

The maintenance crew will mainly gather points on repairs and locates. If it’s a repair, they will log that with a GPS point and enter in the appropriate info in the fields (repair clamps, value, and more). They also use it to perform a locate (spot dig/call before you dig). Long term Travis wants to use this information for capital improvements project to their system.

Travis said, “our system has been in the ground for about 45 years, is all PVC, and not many people cared about creating as-builds. So any additional info that we can gather to help us on locates is invaluable to us.”

With the meter readers time being used towards maintenance of the system, they gather points where they find something that wasn’t located previously. Travis would also like them to gather photos of each location (hydrant for example) and be able to fill out a standard form. 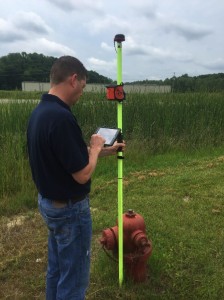 With Collector’s new capabilities, Travis can now set up a Location Provider that connects directly to the NMEA stream from the Eos receiver and a Correction Profile that transforms coordinates from the Ohio DOT RTK system into the projection of his web map so that every point they mark is accurate to within 8 cm.

Travis said, “If we can’t find a 15-inch meter pit lid from a point with 8 cm accuracy there’s something wrong with the human locator.”

Travis is using Collector connected to the Eos Arrow 100 receiver by Bluetooth connection and has both the iPad the Eos receiver and an external antenna mounted to a pole as shown in the picture above. Travis uses the Eos Tools app on his iPad to connect to the Ohio DOT RTK network to acquire sub-foot positions when marking points.

Collector is supported on the iOS, Android and Windows 10 platforms and we plan to release these new high accuracy capabilities this summer!

Are you using Collector, Workforce, Navigator or Survey123 in the field? Are you using Operations Dashboard for ArcGIS to monitor those field operations? Email us at collector4arcgis@esri.com if you are willing to share your story like Travis has. Sharing with your peers is the best way to let others know how they can take advantage of the ArcGIS platform.

Jeff Shaner is a Senior Product Lead with the software products team at Esri. With 27 years experience, Jeff is focused on delivering apps that enable users to work more productively, safely, and effectively. In his spare time, you are likely to find Jeff on the golf course or hockey rink.