As part of the March updates to ArcGIS Online, we have updated large parts of our World Imagery basemap with imagery from DigitalGlobe, USDA Farm Services Agency (FSA), and others in the GIS user community. The update features new and improved high-resolution imagery for Southeast Asia, several states in the United States, and other areas as shown below.

This is the latest in a series of updates to our World Imagery basemap with imagery provided by DigitalGlobe, expanding on earlier updates in the past few months. This update includes Basemap +Vivid imagery, which is now available at 1m resolution (down to Level 17) for the area in Southeast Asia shown above. This update also includes Basemap +Metro sub-meter resolution (down to Level 19) imagery for over 100 metropolitan areas around the world. The latest DigitalGlobe imagery significantly improves upon the image currency and quality in these areas, as you can see for a few sample areas (tabs 22-26) in the story map below. 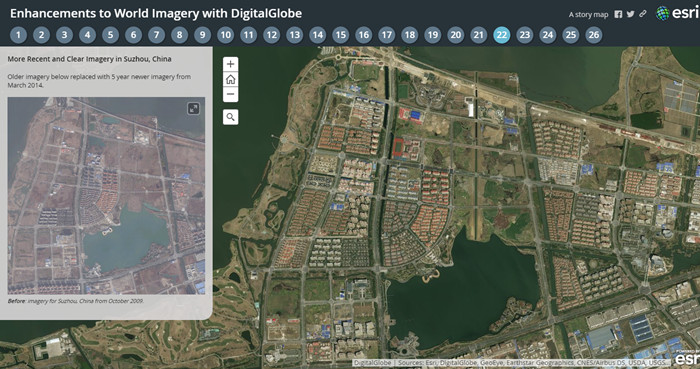 With our recent updates, we have also published the first batch of NAIP 2016 imagery for six states in the United States, including Connecticut, Massachusetts, New Mexico, North Dakota, Oregon, and Rhode Island. This imagery includes both 1m and 60cm aerial imagery captured through the National Agriculture Imagery Program (NAIP) and made available by the USDA Farm Services Agency (FSA). This imagery was all captured in mid-2016 and updates earlier NAIP and community imagery (down to Level 17 or 18) for these states. Esri will be publishing additional NAIP 2016 imagery for several more states, where available, in the next few months.

We would like to thank these contributors for sharing their imagery so it can be made available as part of our World Imagery map. If you have imagery that you’d like to share, please visit our Esri Community Maps for Imagery site to get started!