Last week, we updated the World Imagery basemap with more recent imagery from DigitalGlobe and other members of the GIS user community.  This latest update features DigitalGlobe imagery for Argentina, as well as the Caribbean and parts of Central America as shown below. 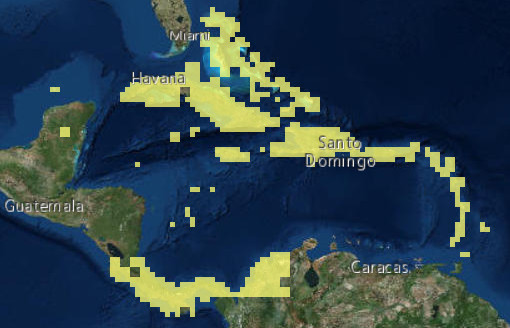 This is the fourth in a series of planned updates to our World Imagery basemap with imagery provided by DigitalGlobe, expanding on our initial update in September, second update in early October, and third update in late October.  This is the latest update with Basemap +Vivid imagery, which is now available at 1m resolution (down to Level 17) for Argentina, the Caribbean and parts of Central America.  The Basemap +Vivid imagery significantly improves upon the image currency and quality in these countries, as you can see for a few sample areas (tabs 12, 13, 14, 15, 16) in the story map below.

Over the next few months, Esri will continue to release updates with latest available DigitalGlobe imagery from both Basemap +Vivid and Basemap +Metro products.  The next updates in December will include +Vivid updates for several more countries as well as +Metro updates with sub-meter resolution imagery for hundreds of large metro areas around the world.

With this update, we have also published new or updated imagery for the communities below: