From October 3-10, San Diego State University hosted their first ever Big Data Hackathon, using the social media hashtag #Hack4SD. Their aim was the promote the development and data science and information technology solutions for San Diego on important civic issues related to water drought and conservation, disaster response, and crime monitoring. Big thanks to the organizers to inviting Esri to attend and mentor the hackers!!

On the first weekend, a number of stakeholders pitched their problems, ideas, and resources to the participants, using those three themes above. After that, 9 teams were formed, and they brainstormed on which problems to attack and how, using their own innovative ideas. For the rest of the first weekend and continuing on through that week, the teams worked to design and build their solutions. Finally on Saturday, Oct 10th, the teams reassembled to present their work. Of the original 9 teams to begin, 5 of those teams made it to the finish line. Of those 5 teams, 3 of them used ArcGIS as part of their solution, and one of the teams “Team Dozier” finished in 2nd Place overall. Jessica Dozier is a grad student at SDSU studying Geography/GIScience, and her sister Christine Dozier is a 4th year undergrad, also at SDSU studying health communications and nursing. 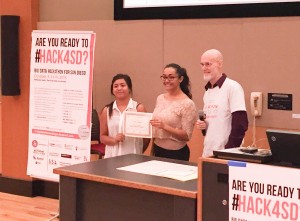 “Our idea was to create an app that allows you to be notified when a disaster occurs near your loved ones and to view or request help when in need. In 2011 when the Tohoku earthquake took place in Japan, our family was scattered in four different locales covering two countries – Japan and the U.S. Our dad, who was in San Diego for training at the time, is a retired Navy chief, Christine lived in Japan with him and our mom, while Jessica went to college in Hawaii, and our older brother lived in Chicago. After the earthquake, we all tried to get in touch with Christine and our mom, but it took hours before we could find out if they were okay and what the Navy base’s plans were to keep them safe. Jessica was finally able to get in touch with them only an hour or so before having to evacuate her area due to the tsunami warnings. If we had this app, we would have been able to communicate with each other easily and find out what was going on with our loved ones.

In disaster management, a key to success in relief efforts is providing aid in a timely manner to affected people or areas. This app helps to alleviate the pressure placed on response institutions by giving them a direct way to find out what help people need and where they need it. Methods to improve the efficiency of communication and increase community resilience continue to grow as a major goal, and we believe that we can help with this. The Big Data Hackathon at SDSU was a perfect venue to take this idea and go further with it. Although we felt as underdogs and were even told we should scale this idea down, we believed strongly in it and our determination wouldn’t let us quit. We know this can be accomplished using Esri’s products and are positive this app can make a difference.”

Team Dozier used a Story Map to demo their app to the judges, which turned out to be very effective. Check it out. Along with the mobile app prototype design.

Congratulations to Jessica and Christine. In a very short period of time they were able to put together an app that uses ArcGIS Online maps, analytical tools, and other Esri resources. Jessica is now a subscriber to Esri Developer Network and plans on expanding the app further so that she can use ArcGIS for Server and its GeoEvent Extension so that she can better connect to real-time data streams.

Here is a gallery of all of the teams and their apps. 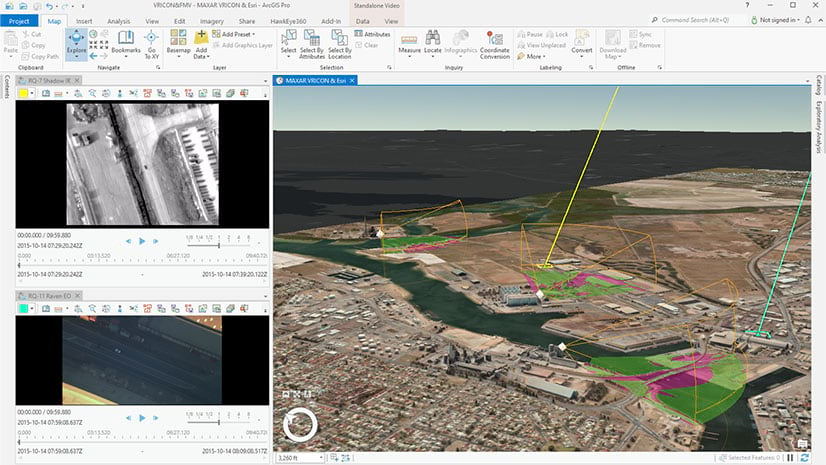