by Johnny Sullivan, Graduate Research Assistant, Center for Research in Water Resources, The University of Texas at Austin, johnrsull@utexas.edu 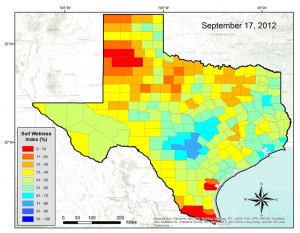 It is unclear at present exactly how climate change will affect global precipitation patterns on a long-term time scale. The Intergovernnmental Panel on Climate Change has agreed on general trends, however, and projects in its 2007 report that certain regions will experience wetter climates, whereas others regions will receive less rainfall than ever before. It is the specific locations and magnitudes of these effects that are uncertain.

Last summer, Texas endured one of the worst droughts in the state’s history. It is not yet clear to what extent that drought was caused or intensified by climate change. But it is clear that having a system to better understand drought severity, especially within the context of previous droughts, could improve preparedness for such events in the future, whether climate change-related or otherwise.

Measuring the stage and flow of important rivers and water bodies is one way to analyze drought status. Another aspect is the amount of moisture present in soils. This facet is not easily observable and can thus easily be overlooked. Still, it is critical, for the moisture content relates directly to plant health, an important consideration in a state with such a large agricultural industry. Plants also preserve soil quality and prevent erosion. As such, a full picture of the drought status must include an analysis of the current state of soil moisture.

To this end, the goal of this project was to create a map, available online and updated in real-time, showing the extent and severity of drought across the state of Texas based on soil moisture content. Knowing only the amount of water currently present in the soils is not sufficient; one must have both the current water content and maximum available water capacity. When combined, these two pieces of data describe the drought status, for they detail how much water is contained in the soils compared to how much the soils can possibly hold. Stating that there is 4 cm of moisture in the top meter of soil means very little. It’s far more valuable to know that there is 4 cm present out of a possible 30 cm – or out of a possible 5 cm. The first case would likely be considered a fairly serious drought, while the second would cause little to no concern.

Both the current water storage and available water capacity are obtained from the North American Land Data Assimilation System (NLDAS), a collaboration between numerous governmental and academic institutions that publishes many types of land surface data in real-time in a 1/8th degree grid across the United States. The distribution of grid points over Texas, each of which represents a 1/8th degree quad, can be seen in the map below. 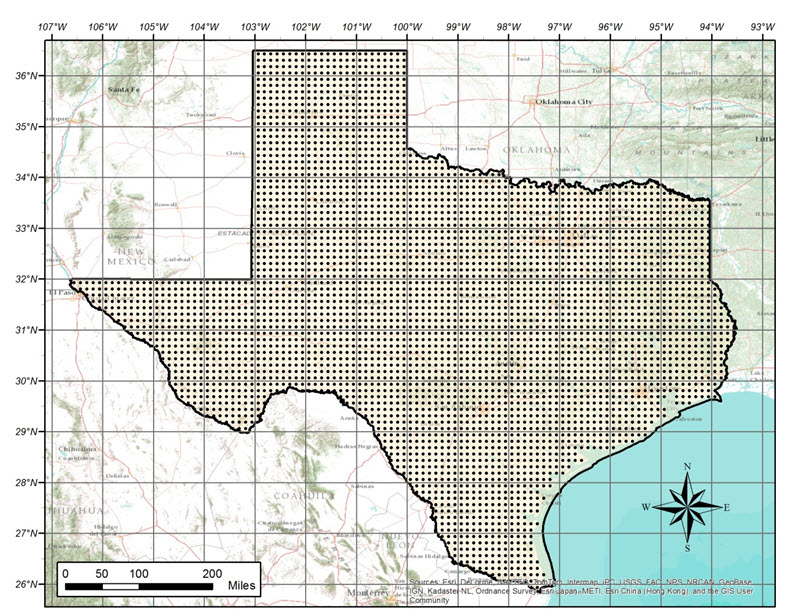 Figure 1. A map of Texas displaying the NLDAS data points across the state; the points are the centroids of the 1/8th degree quads to which NLDAS data is output.

One of the data types included in NLDAS is soil moisture content (a.k.a. current water storage) in kg/m2, for a depth of 0-100 cm. The Noah land-atmosphere model is used for this project’s analysis, and the files are available from the NLDAS FTP site in the GRIB file format. Unfortunately, GRIB files are not compatible with ArcGIS, so these files are converted to the netCDF format on-the-fly via Unidata’s THREDDS server. The available water capacity was obtained from the NLDAS soil parameters. NLDAS defines 18 different soil classes, each with unique values for field capacity and wilting point, and every 1/8th degree grid is assigned one of these classes.

These two pieces of data are then used to map drought across the state. In order to do so, a soil wetness index (SWI) is calculated. SWI is a metric developed for this project in cooperation with David Mocko at NASA. It describes the amount of soil moisture present out of how much could potentially exist in the soil; in other words, the current water storage divided by the available water storage. SWI ranges from 0 to 100% for each NLDAS quad, and this value is updated every day as new soil moisture data is obtained from NLDAS. Once the SWI has been calculated for each quad, the values are averaged on a county basis, as a county-level scale is most useful for disaster management and emergency operations. This yields a single SWI value for each county across the state. Finally, a map is updated with these new values. This analysis is carried out using a geoprocessing model in ArcGIS, as shown in the following figure. 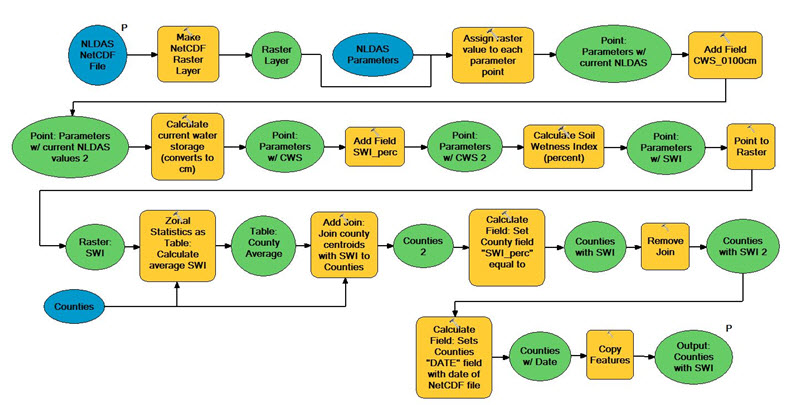 Figure 2. The ArcGIS geoprocessing model created to carry out the analysis for this project.

The resulting map is representative of the current drought status in Texas.  The SWI values for September 17, 2012 can be seen in the map below. There is wide variation across the state, with the soil wetness index ranging from 0 in the northern panhandle to 75% in central Texas. 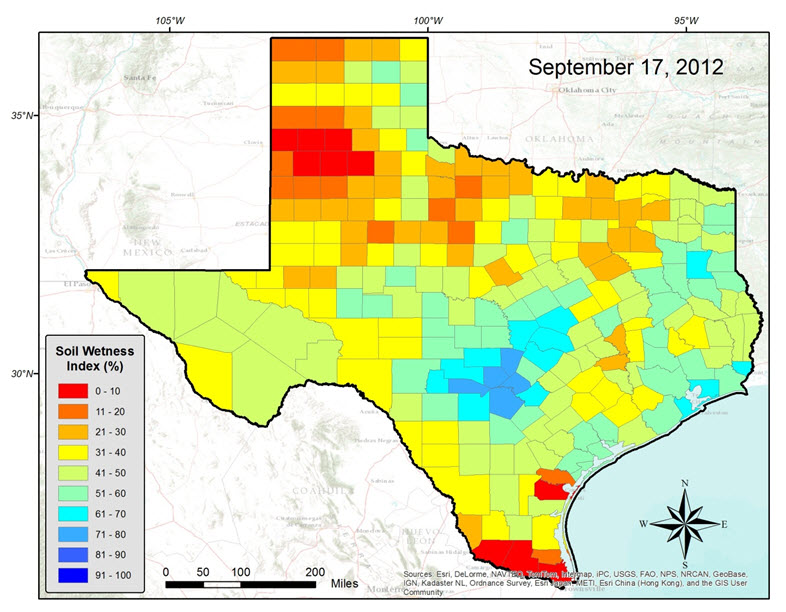 While this map is useful, it is particularly interesting to see how the SWI changes over time. The animation below depicts the SWI values on the first of every month from January of 2011 to June of this year. It clearly shows the progression of the record-setting drought that ravaged the state during the summer of 2011.

Going forward, a statistical analysis of historical soil moisture content will be carried out in order to determine how significant the SWI values are for different areas of the state. For instance, in some of the drier areas it is currently difficult to discern whether a low SWI value indicates drought, or if soil moisture content is simply perennially low in that region. Examining historical data will allow for such a determination to be made. The analysis described above will also be automated, and a new map will be available online every day.

Furthermore, when paired with STATSGO or SSURGO data, this service can be used to calculate the total amount of soil moisture across the state.  By comparing this value to an estimate of water storage change from NASA’s GRACE mission, the role of soil moisture (as compared to rivers, reservoirs, etc.) in the overall “water balance” for the state can be quantified.

The author would like to thank his advisor, Dr. David Maidment, for his guidance and support and the Texas Natural Resources Information System (TNRIS) for funding the project. 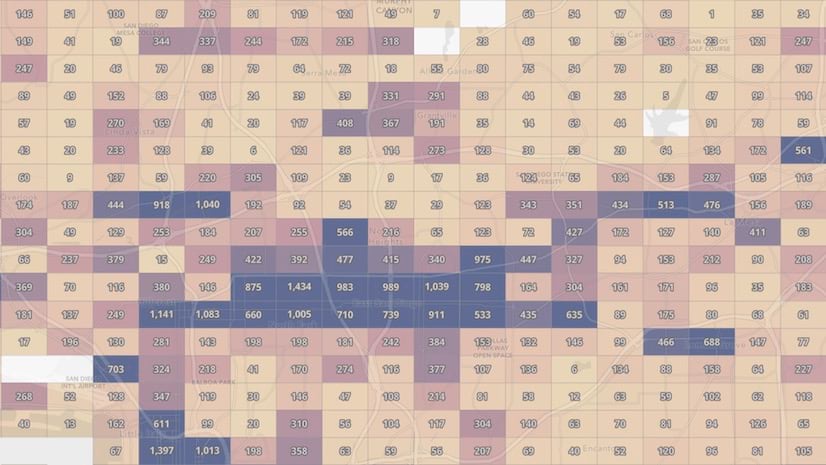