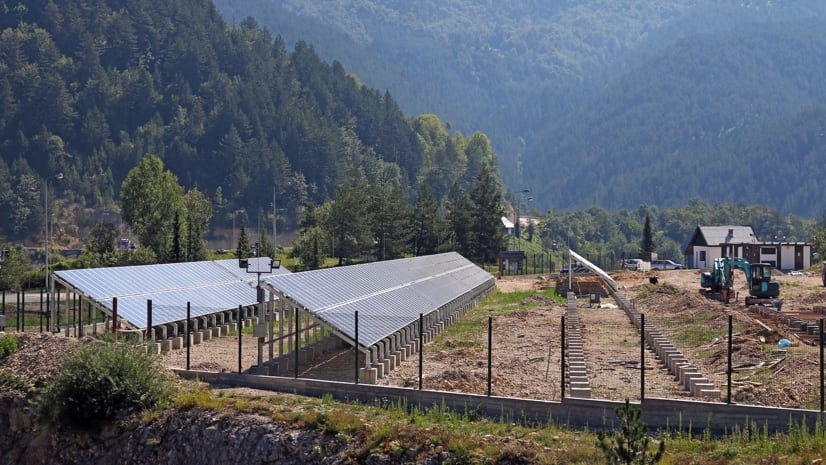 GIS is empowering one state to find safe, effective sites for new solar energy projects while protecting local communities and the environment.

The state of Kentucky is undergoing a transformation from a coal powerhouse to a compelling locale for renewable energy generation. Once the leading producer of coal in the US, and still one of the top three coal-producing states, Kentucky is nonetheless looking toward a future powered by alternative energy sources—hydropower, biomass, and of course, solar.

In the face of declining coal use and production coupled with increasing interest from corporate buyers of renewable resources, the state of Kentucky is experiencing a significant growth in interest from developers looking for solar power project locations. With its robust infrastructure and available space, including previously used mine lands, Kentucky bills itself an ideal choice for solar production sites. But where do they put them?

The Kentucky Energy and Environment Cabinet set out to answer this question. “For several years, as solar has come down in cost, it’s become more of an option here in Kentucky,” said Kenya Stump, executive director, Kentucky Office of Energy Policy. “We had a lot of questions from people: ‘It seems like our mine lands would be great for solar,’ or ‘I don’t know why we don’t put solar on our mine lands.’ And to me, that was always a geospatial question. Where should new sites go?”

Until recently, there was no mechanism in place for the Office of Energy Policy to receive and respond to site inquiries, so developers often selected sites with little to no input from the state. “Solar is so new in Kentucky that we had solar developers making siting decisions, but we didn’t understand why they were choosing their locations,” Stump said. “We would just get notified that a new solar project was going here or going there.”

Staff from the Kentucky Cabinet for Economic Development would pass along inquiries to colleagues at the Office of Energy Policy, who, initially, had no way to gauge suitability. Traditional industrial development sites weren’t meant for solar, and siting characteristics such as topography, slope, or the presence of threatened species had to be considered. Teams at the Office of Energy Policy used their geographic information system (GIS) technology to create the Solar Site Potential in Kentucky platform, guiding solar developers to prime locations.

A Smarter Solution for Site Selection

At the start of the project, the team from Kentucky found few best practices from other states. With input from the state’s GIS experts and Esri, Stump and others from the Kentucky Energy and Environment Cabinet applied GIS to conduct site suitability analysis on land parcels available for development. The analysis evaluates sites based on criteria impacting the technical feasibility of construction, then gives each parcel a score.

Stump’s team collaborated with mining consultants and solar developers to collect relevant data layers and determine the criteria needed to compare sites. Support provided by the KY Geography Network (KYGeoNet), the geospatial data clearinghouse for the Commonwealth of Kentucky, facilitated this collaboration. Melissa Miracle, an IT consultant and project manager at the Kentucky Energy and Environment Cabinet who is deeply involved in KYGeoNet, worked closely with the state’s nature preserves to include data on local endangered species. “That was a tough one because we didn’t have direct access to the raw data,” Miracle said. “So we worked with the folks within the agency who handle the nature preserves to create the layers that we needed. It was important for them to be involved so the developers would know where they can and cannot build.” Miracle also worked with the Natural Resources division to create a better understanding of the state’s mines.

“That was a whole learning curve,” Stump said. “The attributes, how they code things, understanding mining reclamation terminology—all that was huge.”

Another key benefit of Solar Site Potential in Kentucky platform is the transparency it offers to communities that may be affected by possible development. “Our land-use planning is done at the local level. So this tool also helps our local communities understand the reason why developers are looking at their lands—whether it’s because they have the right slope or they have access to transmission or other characteristics,” Stump said. “It’s still up to that community to decide what they want to do with the land.”

The platform also helps community stakeholders find out exactly which local land is being considered for solar projects. This information influences personal and local planning decisions, such as safeguarding land for specific uses or protecting views.

“This tool couldn’t have come at a better time because it shows stakeholders that we are actively trying to find places that were not prime farmland,” Stump said. “We have a layer in the tool that you can turn on to show the land-use classifications, which can also inform the developer in the conversations with the community.”

Plans are also underway to add 3D enhancements to the platform to make it easier for users to visualize the areas under consideration for development. “We’re working on creating 3D map scenes in some of the prime areas for solar across the state,” Miracle said. “This would allow developers to ‘fly in’ and see the slope, the terrain, a whole new view.”

Kentucky’s success in analyzing solar siting potential has created opportunities for collaboration with other states. “Given the work our GIS group is doing, we’re known nationwide as the office you go to if you want to learn how to get started with GIS,” said Stump. “We’re answering energy questions from other states that, at the heart of it, are geospatial questions. Other energy offices are beginning to see the light; that they need to know where things are going to occur, where they should occur, and where they could occur, before talking to stakeholders and discussing policies.”

“It’s going to be another lens by which we look at everything we do, from emergency response to permitting to siting facilities and economic development projects,” said Stump. “Right now, we’re assessing where the datasets are. We know the Environmental Protection Agency (EPA) has the EJSCREEN environmental justice tool, the Census Bureau has Community Resilience Estimates, the Department of Energy has the LEAD tool to examine low-income energy affordability, but how do we bring them together? What does environmental justice for energy look like in Kentucky? That’s a big where question. We’re really excited about where we can go.”

Learn more about how GIS is used to identify areas with high solar energy potential.