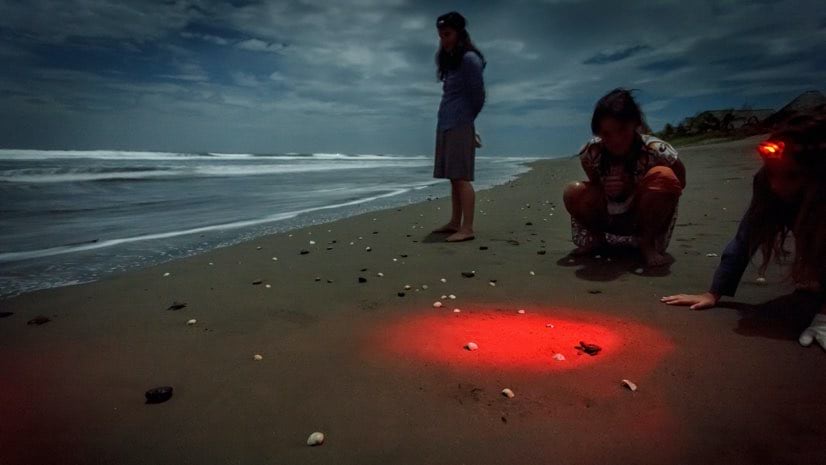 Researchers deployed many techniques to understand the illicit trade in sea turtle eggs.

On a warm Saturday night in 2018, somewhere in northwest Costa Rica’s Guanacaste province, Helen Pheasey inspected a small white spherical object in the palm of her hand. Pocketing it, she took a short walk to a nearby beach to begin the night’s research.

It didn’t take her long to find an olive ridley sea turtle, measuring 72 cm tip to tip, making its slow progress out of the surf and onto the sand. She watched as the turtle dug an egg chamber with its rear flippers and settled itself above it. Over the next 20 minutes, it lay a clutch of around 100 eggs, the same color and shape as Pheasey’s spherical object.

When she knew the turtle was roughly halfway through its task, Pheasey reached down and deposited the object among the eggs. Then she made her way home to wait.

On Monday morning, the object, which had an embedded GPS transmitter, began to move. It was heading away from the beach, deeper into Costa Rica’s Central Valley.

On the Poachers’ Path

GPS-enabled tracking systems represent one of the largest segments of the GPS industry. Trackers generate $1.7 billion in annual sales, a figure expected to double over the next seven years.

Every tracking system has three basic components: a GPS receiver to plot location; a communication device, such as a cellular connection, to transmit those location coordinates; and a geographic information system (GIS) to transfer positions into tracks on a map.

Most of these systems are used to capture the movement of people—usually by companies or government organizations interested in the efficiency of fleets, for instance—but some are used to track animals.

Pheasey, a conservation biologist and doctoral candidate at the University of Kent’s Durrell Institute of Conservation and Ecology, uses a tracking system to monitor two sea turtle species—the green sea turtle and the olive ridley— that have seen a sharp decrease in global population. An estimated 800,000 olive ridley females nest each year, down from a historical estimate of 10 million prior to overexploitation for meat, eggs, and leather. As part of her analysis of Costa Rica’s black market in sea turtle eggs, she fools poachers into picking up the fake eggs.

The decoy, called an “InvestEGGator,” was developed by conservation group Paso Pacífico. Kim Williams-Guillén, the group’s lead conservation scientist, drew inspiration from an unlikely source. On the TV series Breaking Bad, drug enforcement agents attach a tracking device to the underside of a barrel of chemicals used to manufacture methamphetamine, hoping the cargo’s path will provide useful information about the drug supply chain.

Williams-Guillén collaborated with Lauren Wilde, a makeup artist who works with cinematic special effects teams. After studying the composition of sea turtle eggs, Wilde used a polyurethane filament for the housing. A 3D printer creates half an egg. After the electronics are inserted, the second half is printed and fused to the first.

Pheasey learned about the decoy eggs as she was beginning her work in the field in Costa Rica. “The two projects were so compatible,” she said. “I’m looking at the illegal wildlife trade, and they’re looking for someone to put these things in the ground. They had a prototype ready to scale but no place to deploy it.”

Will It Fool the Pros?

Over a period of several weeks, Pheasey and her team deployed 101 decoys. They began on the country’s Caribbean coast, where the larger green sea turtle is more common, before moving to the Pacific side to study the olive ridley.

The team’s presence didn’t draw much suspicion from poachers, who are accustomed to seeing turtle researchers on the beaches at night. Even the deployment of the decoy eggs looks unsuspecting, since researchers often reach into the nests to deposit humidity monitors and other sensors.

Nor did the poachers pose much danger to the scientists. Since the payout for this kind of poaching is relatively small—a dozen eggs sold to a trafficker will net about $4—the researcher’s activities don’t put a huge dent in the income of individual poachers. “It’s quick and easy money for them,” Pheasey said. The hard-boiled eggs are a popular bar snack. They are also consumed raw in a cocktail called sangrita or used in a dish similar to tortilla de patatas, or Spanish omelet.

Pheasey knew many of the decoys would not yield useful information. Poachers sometimes spotted them.

Still, the results were promising. Of the 101 fake eggs, 25 were taken by poachers. Five provided trackable signals. Most of the paths ended very close to the beach. These were of limited interest. Pheasey was less interested in small-time poachers than in the traffickers that deal in bulk. And one Monday morning she found what she was looking for.

A Glimpse of the Supply Chain

On a GIS-enabled phone app, Pheasey could follow the egg’s progress away from the beach. “It just went on and on,” she recalled. After traveling 137 km, it remained stationary. Pheasey zoomed in and pinpointed the location as an alley behind a supermarket.

“That back-alley transaction was probably with someone who was then going to sell them door to door,” she said. “So you had the whole trade chain and a good indication of the number of players.”

With the concept successfully proven, Pheasey hopes the decoy eggs reveal even more details about the larger network. Rather than battle individual poachers, authorities could have a bigger impact by targeting the overall supply chain.

“We want to have enough projects in different locations so we can identify problems and refine the technology, so that it can be a usable tool for law enforcement,” she said. “But for now, it’s about identifying traffickers and those who are moving large quantities, rather than individuals who are probably from marginalized backgrounds. We’re not interested in taking the pittance the poacher is getting. We’re more interested in enforcing the law on a larger scale and waiting behind that supermarket loading bay for the next shipment to come in.”

More animals could also be in the mix with Pheasey’s research having potential to inspire poaching mitigation efforts for other species and in other locales. Paso Pacífico is even considering how to apply the tracking concept to battle the large black market for hammerhead shark fins.

“The most comparable species to turtles is crocodiles, because in some countries they’re poached for their eggs,” Pheasey said, while noting that depositing eggs under a mother crocodile poses some logistical challenges. “It would definitely require a different deployment strategy.”

Night is when sea turtles lay their eggs, which means it’s also the period when poachers ply their trade. A decoy egg can blend into the darkness, which is why tactile sensation is key to its success.

“They look very realistic, especially when they’re covered in sand at night, but it’s even more important that they feel like real eggs,” said conservation biologist Helen Pheasey. “A real turtle egg will kind of squish under your thumb.”

To create a perfect egg facsimile, Lauren Wilde, a Hollywood makeup artist who worked with the organization Paso Pacífico to design the eggs, chose NinjaFlex, a flexible polyurethane filament.

The eggs even come in different variants, depending on the sea turtle species. For the green sea turtle, the decoys contain ball bearings to make them feel heavier and to approximate the uneven weight distribution of the yoke sloshing around inside.

“They really went to a lot of trouble,” Pheasey said. “Fortunately, all I had to do was put them in the turtles’ nests.”