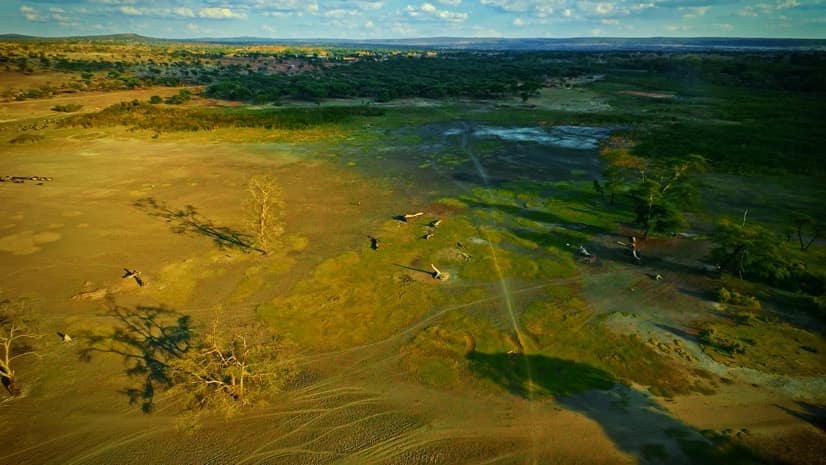 Garamba National Park in the Democratic Republic of the Congo sits at the center of a zone of human conflict that spans decades. Dwindling numbers of animals and increasing sophistication of poachers has led to a conservation fight that has been forced to professionalize.

Armed groups involved in various conflicts in the Congo and neighboring South Sudan have decimated the park’s wildlife. By the early 2000s, these groups had killed the last northern white rhino in Garamba and other animals suffered severe losses. Less than a tenth of the elephants remain from the numbers recorded in the 1970s.

Today, conflict enters the park from bordering South Sudan, which has been in turmoil with an ongoing Civil War that reignited in 2013.  Armed groups from Sudan, South Sudan and the roving Lord’s Resistance Army (LRA) all vie to slaughter elephants for tusks that can fetch thousands of dollars in far away markets.

An Africa-wide report that recently appeared in Nature analyzed wildlife decline in protected areas over decades, concluding that continued conflict was the single most important predictor of wildlife decline—eclipsing human population pressures, drought, and other factors.

Conflict means that weapons and ammunition are readily available. It disrupts the local economy with displaced people turning to hunting wildlife to survive. And it aids a level of lawlessness that emboldens poachers who profit greatly from the illicit ivory trade.

Garamba’s elephants are a unique mix of forest and savanna species, with the larger size of savanna elephants and the straight (and prized) tusks of forest elephants.

“Conflict exacerbates the difficulty and challenges of managing a protected area,” Naftali Honig, Anti-Poaching Information Coordinator for the African Parks Network and National Geographic Explorer, said. “These armed groups travel as much as a thousand kilometers to hunt the elephants in our park. We use GIS (geographic information systems) to analyze how they get here.”

Rangers will always have trouble covering the thousands of square miles that comprise Africa’s largest protected areas to catch these criminals. Location technology and hardware, such as camera traps and sensors, will play an increasing role in building awareness about the movement of armed groups both inside and outside the park.

With GIS, African Parks can analyze and monitor:

In the military realm, this understanding of the location and movements of adversaries is called geospatial intelligence. Sharing knowledge with Rangers in the field adds to their situational awareness, adding an edge against a force that lives in and knows the bush well and is often larger and better armed.

“The Exploration Technology Lab, one of the three NatGeo Labs, is a world-class technology development and innovation group that deploys integrated sensor networks to monitor and protect the world’s protected areas,” said Fabien Laurier, Vice President, Labs at National Geographic. “The National Geographic Labs are collaborating with Esri to develop an information system to organize the data and power real-time geospatial and domain awareness.”

The unrelenting efforts of the Congolese Nature Conservation Institute (Institut Congolais pour la Conservation de la Nature – ICCN) and its partner African Parks have made progress on securing the park and countering the poaching pressure.

This effort has included

The LRA uses ivory to fund their fight and are notorious for kidnapping children for use as fighters and sex slaves. With the rebel force now limited to around 150 fighters, Garamba protection efforts now extend to the entire scope of the park as well as significant parts of the adjoining hunting areas.

It’s too soon to tell if these tactics can turn the tide or if this conflict will end in time to save Garamba’s elephants. It’s rare for war to lead to extinction, but the northern white rhinos killed in the park were the last of their subspecies in the wild.

The Rangers and support personnel at Garamba aren’t shrinking from the fight. They have gained resolve from the memory of the 19 rangers that have lost their lives protecting the park since 2006.

While African Parks focus on conservation, they believe parks provide a broader hope.

“In the bigger picture, these parks are islands of stability that have the potential to help not just the wildlife but the people—expanding access to healthcare, providing jobs to help the economy, and spreading this stability outside of park boundaries,” Honig said.

Watch this video interview that features both Naftali Honig of African Parks and Kaitlin Yarnall from National Geographic as they explain the role of technology in the ongoing fight against poachers in Garamba National Park.

Learn more about how location technology is contributing to conservation efforts and learn how you can help National Geographic and African Parks in this fight. See how smart mapping makes mapping easier and more impactful.