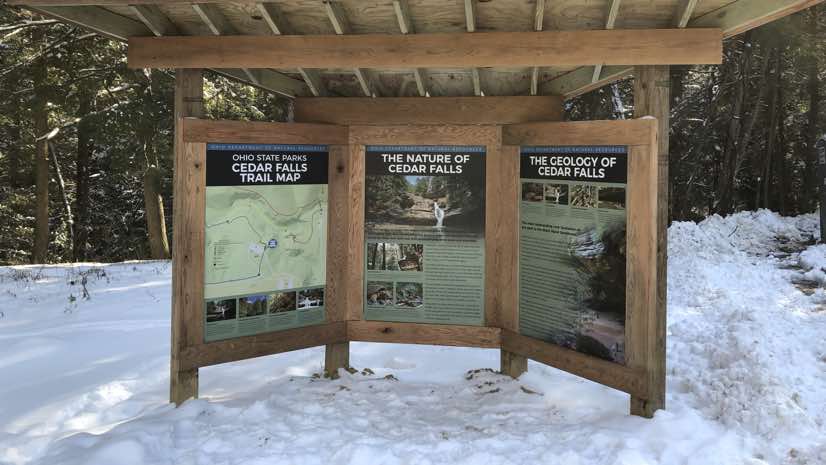 The state of Ohio recently committed a record $88.5 million to improving its 75 state parks. The funds, dedicated in 2014, put in motion a flurry of activity that renewed interest in more than 5,000 miles of trails that traverse forests, rivers, lakes, caverns, nature preserves, wildlife areas, and the shores of Lake Erie.

In line with park improvement efforts, one local group suggested placing confidence markers—a “You Are Here” designation on maps along the trails in their local park. Staff at the Ohio Department of Natural Resources (ODNR) embraced the idea, but quickly realized they didn’t have accurate trail maps.

The ODNR Division of Parks and Watercraft staff then affixed the maps to a plate and post and placed the signs at regular intervals along the trails. Visitors loved the new maps, and soon word spread to other parks. Residents throughout Ohio wanted these maps for their local parks.

In order to manage this, ODNR operates separate divisions for Parks and Watercraft, Wildlife, and Forestry in addition to 144 field offices across the state. Each office and division has used a geographic information system (GIS) for decades for all aspects of land management.

In the latest initiative, it would have been cost prohibitive to send teams to every park to hike the trails and collect data. Instead, ODNR’s mapping staff configured a data collection app that would allow the staff at each park to collect their own GPS tracks. The app has pull-down menus to capture different details, such as the trail surface (dirt, gravel, paved, boardwalk) and trail difficulty.

“The application was simple enough that we only needed a five- or ten-minute phone conversation to get users up and going,” Powers said.

Within one year, the department had collected detailed data from each park. Mapping staff got busy creating trail maps. First, they produced the popular “You are Here” confidence maps for each park. Then, they looked at the other maps that parks offered to visitors and realized they could make improvements.

“Previously, someone had hand-drawn trail maps for park brochures, and there was zero accuracy,” Powers said. “If somebody went out there with a pamphlet map, they would get confused really quickly.”

To create new park maps, ODNR staff gathered additional points of interest, such as picnic areas, restrooms, water fountains, information centers, parking, camping, and recreation opportunities. They used this expanded park information to update the maps in the brochures and to create large maps for kiosks.

The trail maps are now being updated on a regular basis for a new trail website, trails.ohiodnr.gov. The next steps are to integrate park trail maps with other existing trail networks that continue past the boundaries of the parks, and to deliver the map data digitally to handheld devices.

To streamline its work, ODNR recently shifted to an enterprise approach. The department is uniting all its offices with the statewide Ohio One Network, a unified state and local government solution that brings together design, engineering, and operations of network infrastructure. And, everyone is now using the software-as-a-service mapping platform ArcGIS Online to collect, manage, map, analyze, and share data.

“We’ve been able to modernize everything with this holistic approach of centralizing IT,” Powers said. “Now our users have opportunities to use the three different platforms—desktop, web, or mobile. They’re direct editing the datasets and doing it anywhere on any device.”

In Ohio’s many rural areas, Internet connectivity can be unreliable. But, ODNR staff can use their apps and even their mobile devices to use, edit, and collect data even offline. The devices sync up with the network when connectivity returns. This change makes work more efficient all around and replaces many paper-based processes.

Now, ODNR wants to go beyond accurate maps of trails and parks to streamline public access to other services such as permits and licenses. In the past, permits were delivered through the different divisions—the Division of Watercraft for boat registration, the Division of Wildlife for fishing and hunting licenses, and the Division of Parks for park reservations.

“The public generally doesn’t care about our different divisions,” Powers said. “They just want to go to a public property for recreation and maybe get licenses to hunt or fish or register their boat.”

Plans are underway to connect all of the licensing and reservations systems so the public will have a single account for hunting and fishing licenses, overnight reservations, and boat registrations. The effort will also help ODNR promote available park activities while collecting better data on park use.

As hunting and fishing popularity declines across the country, it directly impacts what ODNR and other states can accomplish as a significant portion of funding comes from licensing fees. A reliance on state budget dollars along with the decline in license revenue often left ODNR unable to address all planned projects.

This has spurred a marketing mentality in Ohio with various ODNR divisions eager to understand what the public wants. This led to more active marketing of opportunities to swim, bike, hike, horseback ride, boat, fish, hunt and play disc golf, along with numerous options for overnight stays in lodges, cabins, and campsites.

Ohio is one of only seven states in the nation that offers free admission and parking at all of its state parks and it is committed to this open access. During Governor Kasich’s administration, more than $230 million has been invested in state park infrastructure to improve experiences and encourage an active lifestyle.

“The next thing I want to do is to show the public where we’ve made our investments,” Powers said. “I don’t think the public knows about all the modernization we’ve done to restrooms, boat ramps, cabins, and campgrounds. It’s a good opportunity to show that on a map.”