This blog post was originally published in August, 2022, and was updated in November, 2022.

One of the core missions of ArcGIS StoryMaps has always been to enable people to tell place-based stories around the world that combine geography, media, and narrative in a way that no other storytelling platform does.

That is why our team prioritized bringing the Classic Map Tour template into ArcGIS StoryMaps from the start. Its seamless blend of maps, media, and text enables an audience to virtually see the world through the eyes of the storyteller, without requiring any GIS skill or experience to author. It takes just a few clicks to set up a sequence of geographic points that readers scroll through in order, in a layout that we call guided map tour. Soon after, we added a second layout to map tour, which we dubbed explorer map tour. This analog to the Classic Shortlist template displays points in a list or grid and permits readers to browse as many or as few as they wish, in any order they wish.

It’s no surprise, then, that map tour remains one of the most popular features in ArcGIS StoryMaps. In fact, between January 2021 and February 2022, nearly one in five publicly published stories contained at least one map tour. Those kinds of figures are big part of the reason we’ve stayed focused on updating and improving the map tour experience. Here are some of the creative ways you can use those enhancements to spice up map tours in your stories.

For some guided tours, it can help to see the relationship between points as you scroll from one to another. As of November, 2022, storytellers can enable tour progress lines, which light up as readers get to each point, while the lines connecting points still to come remain more faint. To turn progress lines on, simply go into the map options and toggle the relevant button, as demonstrated in the short video below.

Keep in mind that not every tour benefits from progress lines. They’re most effective for tours with points that convey a sequential order—like, say, an itinerary—and don’t make as much sense for tours that are more of a collection of separate examples. They also work best when the points are arranged geographically so that the progress lines don’t tangle too much and cause a visually messy situation. The story Planning a trip to see Scotland’s Castles happens to check those boxes, and you can see how progress lines can enhance the guided tour experience for readers.

Scroll fatigue is very real—too many slides or tour points risks an audience’s eyes glazing over. Fortunately, the August, 2022 update to ArcGIS StoryMaps gave storytellers the ability to start a guided map tour at whatever number they choose (up through the triple digits, at least). What this means is longer tours can effectively be “split” into more digestible chunks within the same story, or even across multiple stories in a collection; their numbering can remain in the same sequence throughout simply by starting each tour with the next number after final stop in the previous tour.

Tip: Remember, if you’re starting with an already fully built guided tour, you can also use the More options menu in the slide panel to duplicate a tour block within a story. Then you can just delete slides as necessary until you have the breakdown across multiple tours that you want.

For example, our team originally put together the World Heritage in Danger story in part to show off guided tour when it was first rolled out. There are four different, two-point guided tour blocks in the story; now, with custom numbering, we can make those blocks feel like they’re all part of one cohesive tour of UNESCO World Heritage Sites around the globe.

But wait, there’s more when it comes to numbering! We’ve also introduced the ability to have a guided tour’s points appear in descending order. This functionality is great for “T-minus” style countdowns (e.g., documenting the things that happened leading up to an important event) or for running through a ranked list from last to first. A more whimsical example of that use is this tour of my top ten favorite Minor League Baseball venues.

All of the numbering options are found inside the More options menu (represented by three dots) that’s visible at the bottom of the tour block when the slide panel is unfurled—the full process is demonstrated in the video below.

Tip: Yes, you can use the descending-order option in conjunction with a custom starting point—so you can also have a “countdown” tour with the appearance of being spread across multiple tour blocks.

See the world in three dimensions

In December, 2021, we added an important choice to the Map options of map tour (both guided and explorer layouts): whether to toggle your tour into a three-dimensional scene.

Now, as cool as that is, it’s important to use discerning judgment when deciding whether to press that 3D button or not. Not every tour (nor every basemap) is suited for the 3D effect. Tours with points that are very far apart can be fun for the sweeping transition from point to point. At the other end of the spectrum, a hyper-localized tour can work nicely, too—if there’s sufficient terrain in the environment. Check out this story for a more thorough discussion of which situations work best for 3D cartography.

Tip: When setting tour point locations for a tour that has been toggled into 3D, you can also set the angle of the tour point view; a more oblique angle can help bring the local terrain into sharper relief. Just be sure to select Use the current zoom level when you’re editing the tour point.

Fifteen commonly used basemaps are initially offered by the basemap picker when configuring a map tour in ArcGIS StoryMaps. While these cover a wide variety of uses, sometimes it helps to be able to add a little more context to a tour, so we’ve also given storytellers the option to bring in a web map to serve as a tour’s basemap. Just click Browse more maps from the basemap picker in the Map options for a tour and you’ll have access to all of your own web maps, plus those that you’ve favorited, are housed in your organization, or were produced by the ArcGIS Living Atlas of the World.

Note that when a web map is being used within a map tour, you won’t have direct control over layer visibility; that would need to be set in map viewer first. Also, all pop-ups will be automatically disabled so as not to distract from the tour experience itself.

Tip: One helpful use for a custom web map in a guided map tour is to draw the tour route or progress line so that readers will have an easier time keeping track of the overall geographic context as they’re whisked from point to point.

With these capabilities on top of its original, innovative functionality, the map tour block in ArcGIS StoryMaps is wide open for all kinds of creative uses, and we’re excited to see what our awesome storytelling community comes up with! The nuts and bolts of implementing all these features are covered in our comprehensive guided tour and explorer tour tutorials, so be sure to keep those stories handy for reference as you’re putting together your tours. Happy storytelling! 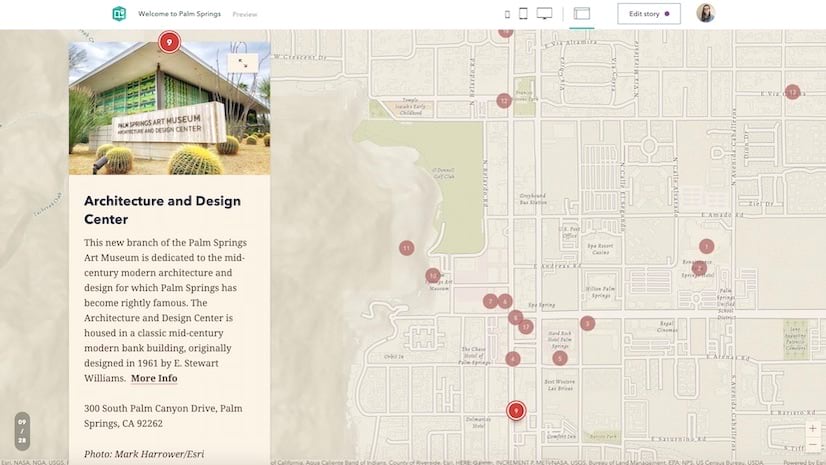 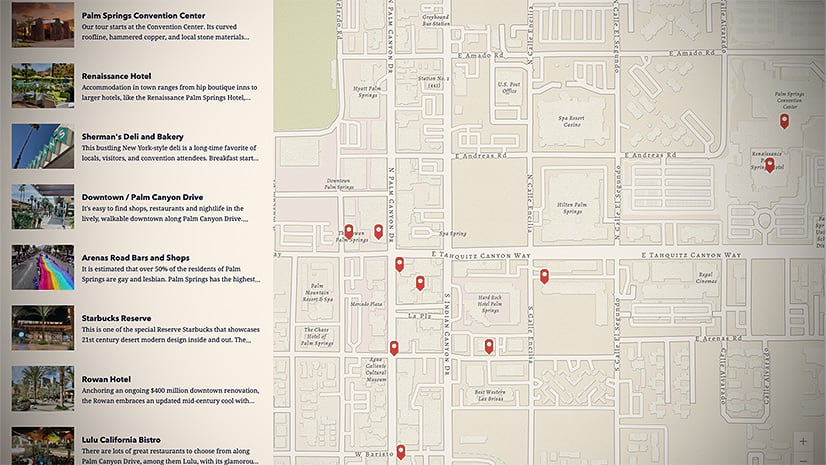