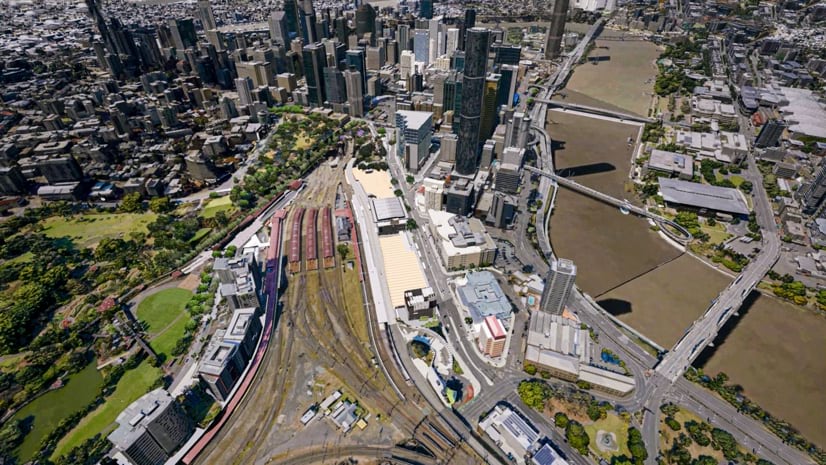 In Brisbane, the most rapidly growing city in Australia, a digital twin and a virtual reality program guide the design and construction of an underground railway.

The team tasked with designing the first underground railway under the heart of Australia’s fastest-growing city knew it would be a delicate task, fraught with infrastructural peril. Tunneling several stories under Brisbane’s teeming metropolis, constructing expansive subterranean stations—what could go wrong?

With the scheduled completion less than two years away, it’s clear they made strong choices. But at the outset, nobody knew that the effort would involve an ingenious application of a geographic information system (GIS), creating a detailed and up-to-date 3D model of the project and the Queensland capital city above it, and an immersive digital twin that brings the project to life.

The Queensland government conceived the Cross River Rail project as a way to alleviate population pressures. By 2036, the South East Queensland metro area is projected to add another 1.5 million residents (a number that by itself would make it Australia’s fifth-largest city), pushing the region’s total population to nearly 5 million.

Most of these new arrivals will live outside of Brisbane, but within commuting distance. Many of the new jobs, however, will be in the Brisbane CBD (central business district), on the north bank of the Brisbane River.

Soon after the project was announced, the Cross River Rail Delivery Authority, the overseeing agency created by the Queensland government, sought advice from colleagues on the other side of the world. The Crossrail project in London, launched in 2009, has similar aims, creating new tunnels and ten new underground stations throughout Central London.

By the time Cross River’s plans were beginning, Crossrail had been under construction for almost seven years. The Cross River team contacted their British counterparts and asked what, if anything, they would do differently if they could start over.

“They basically said, ‘we would have built a bigger, better 3D digital model sooner,’” Vine said. The big brother then offered three steps for how to build the perfect GIS-driven digital twin:

For starters, Crossrail recommended that Cross River create a common data environment for all work. Any project-related dataset, no matter what the format—GIS, building information modeling (BIM), volumetric, photogrammetry (a three-dimensional coordinate measuring technique that uses photographs), everything—should be in a central repository.

This was useful advice. In recent years, GIS technology has become adept at integrating BIM models and other project-related data formats into a GIS environment.

BIM models are 3D architectural models. They describe and depict the actual things being built or dug, while GIS adds contextual awareness.

Rather than just consider the BIM models as inert objects floating in space, people involved in a project can visualize what’s around them. In GIS they can see how each structure fits into the infrastructure above ground (such as paths, roads, and light poles), underground (the pipes and lines that connect utility services) and to the natural world (landscaping, groundwater, and even wildlife and biodiversity considerations).

The advice also helped Cross River handle a broad mandate. When Queensland’s government created the Cross River Rail Delivery Authority, it required the agency to be responsible not just for the railway itself, but also for planning and assessing the project’s economic impact.

There was a good reason to include this mandate in the agency’s charter. Although Cross River’s aim anticipates future developments in the region, its location means Cross River will also influence those developments.

“Cross River Rail is going right under the CBD, so the area around the stations is already prime land where the city will grow next,” Vine said.

Crossrail’s second piece of advice related to BIM data coming from the project’s many contractors and subcontractors. Create a “federated” BIM model, the Brits advised.

That meant combining the disparate BIM information into a single BIM file that depicts everything. For that to happen, Cross River needed to ensure that every contracting entity was using exactly the same data formats, standards, and protocols.

“What the Crossrail team didn’t realize until it was too late is that all their contractors were telling Crossrail how they were going to submit their BIM models—it was baked into the contracts,” Vine said. “They told us, ‘we indulged them, and we shouldn’t have.’”

Crossrail’s third recommendation is “the party piece, the one everybody loves,” Vine said, because it’s about making the model immersive. “They told us they should’ve put all their data into a game engine and turned it into virtual reality.”

The Australian team did just that, using Unreal Engine, a 3D gaming tool, to tie it all together, so anyone sitting anywhere could be transported inside the place they were set to build.

“So we have a federated BIM model of all the stations and all the tunnels, and GIS land mapping in 3D,” Vine said. “But then we put it all into Unreal, crank the magic gaming engine handle, and it gives us back a single virtual reality.”

The result is 17 kilometers of immersive railway infrastructure that can be explored, like a first-person game, on a screen manipulating a web scene or with a virtual reality (VR) headset. The Cross River team even built a virtual reality theater using a five-way projection system, so that many people can explore the project together.

The virtual reality component transcends mere flash, providing a way for non-technical stakeholders—people not directly involved in the design and construction of Cross River—to view the project as it proceeds. It also gives those who are part of the design team the kind of visual assessments that even the most detailed 3D BIM model cannot provide. As one example, Vine points to the Roma Street station, where teams are experimenting with ways to install a massive art exhibition space on a concourse wall, trying and testing different ideas virtually before they finalize the design and build it.

The Digital Twin Expands to Capture All of Brisbane

Cross River’s commitment to the common data environment (step one of the three-point plan recommended by the Brits) signaled a shift in the usual relationship between GIS and BIM on this kind of large infrastructure project. In the past, GIS for sure would have served as a crucial support player, a context-adding host for the 3D architectural BIM renderings. But given the mandate to document economic development around the train stations, Cross River elevated the importance of GIS. To depict those above-ground areas, Cross River would require skillful 3D maps, including data gathered by Lidar sensors to capture engineering-grade measurements.

That, in turn, led to another requirement. The above-ground data would also require context.

If the goal was to understand how the stations would affect economic development in the CBD, it didn’t make sense to map just the area around them. You needed a map of the entire CBD. And everything would need to be layered perfectly, so that anything underground (stations, tracks, tunnels, cables, and pipes) lined up in every respect with what was above it.

The result is a 3D land layer that shows lots, utilities, and other pertinent visual information. Cross River’s use of 3D even includes material designed in consultation with Brett Leavy, a self-described “cultural heritage digital Jedi” who uses advanced VR technology to recreate pre-colonial Brisbane. Leavy’s input, Vine explained, has helped ensure that the project honors and remains respectful of a First Nations perspective.

“We went from ‘it’s all about building a railway’ to ‘ah, it’s also about rebuilding the city,’” he said. “We ended up making a 3D model of Brisbane, because it was impossible to do one without doing the other.”

A Twin Without End

The Cross River digital twin is a continuous work in progress. As designs are finalized and construction proceeds, a staircase or tunnel that existed as a single item in a contractor’s initial BIM submission becomes one with thousands of individual components in the federated BIM model.

Beyond just the Cross River project, there’s no reason the digital twin can’t continue to grow in perpetuity, evolving with Brisbane itself. “We have a running joke about Cross River Rail, that the more you look at it, the bigger it gets,” Vine said, noting that after the project began, the city was selected to host the 2032 Summer Olympic Games. “We have an opportunity to take what we’ve done here as part of building a railway line and stretch it to include everything we’re going to need to build for the Olympics.”

Vine even foresees the twin being a tool for operating the system in addition to its value in design, construction, and project management. “We realized we’ve built a digital twin that will help run the railway,” he said. “So there’s almost a whole second chapter waiting to be written.”

Read more about how rail operations use GIS to modernize transportation and how GIS creates digital twins of the natural and built environments.

View the “Mega Timelapse” video below to see how the project progressed in 2022. 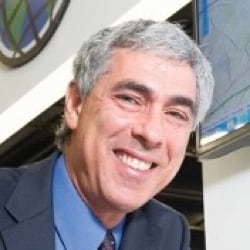 At Esri Ian leads international business development for transportation markets in Europe. He is a Cultural Geographer, residing in the Loire-Atlantique region of France. Before joining Esri in 1998, Ian was Regional Sales Manager at Etak (now TomTom), Managing Consultant at Accenture, and Director of Management Information Systems at the City of New York Department of Parks & Recreation. An earlier role as research manager at Neighborhood Open Space Coalition included co-authoring the book Struggle for Space: The Greening of New York City, 1970-1984.