Although it’s been more than 50 years since the Watts riots near Los Angeles took place, the aftermath of the unrest can still be seen today. Many of the businesses torched by rioters never returned. Lack of investments in the community has had a significant impact on the quality of life and the health of Watts residents.

In places, it appears as if an entire neighborhood has been dismissed due to the violent six-day episode in its distant past.

Ronald ‘Kartoon’ Antwine, a reformed gang member and lifelong Watts resident, wonders: “How come when I leave my neighborhood, I see clean streets and greenery, but when I come back here, I’m looking at trash and weeds?”

One small strip of land at the corner of Monitor Avenue and 114th Street symbolized the painful effects of such urban blight. Weeds grew to seven-foot heights, and the empty space was prone to illegal dumping of unwanted stuff.

The Trust for Public Land, a nonprofit organization that partners with cities nationwide to transform vacant land into parks, worked with the local community and the City of Los Angeles to acquire the property, identify community priorities, and turn the vacant lot into a park.

In a short documentary about The Trust for Public Land’s effort in Watts, Antwine—who has lived across the street from this parcel for more than forty years—recalls the many times his mother would falsely report seeing a dead body in the vacant lot just to get the police to come out and investigate the illegal activities there. He recalls local gang members using the vacant lot to define their turf.

“On the west side of the tracks are Bloods, and on the east side are Crips,” says Antwine. “The park will bring all of them together, because it’s on the dividing line.”

“Our life in Watts, we’ve got so much cement, bricks and steel—it drains the energy right out of us,” adds Antwine. “What is it they say, ‘Music calms the savage beast?’ Well, nature does too. So, when you’re around that greenery—when you can breathe some nontoxic oxygen—that puts you at peace.”

While Watts is one of the most park-poor areas in Los Angeles (LA) County, it’s not alone in needing more parks and green spaces.

Like most metro areas, cities across the county has struggled to maintain and improve citizen access to parks. The county is the most populous in the nation and one of the largest, with 10 million residents across 88 cities and an area of more than 4,751 square miles. There are 3,024 parks that cover 900,000 acres; however, most of the acreage is currently in mountain parks, and urban centers are left lacking.

The Trust for Public Land has been working in Los Angeles for decades. It was the first place the organization applied geographic information system (GIS) software to help map priority places for parks.

“I started in 2001 as the first GIS person hired at The Trust for Public Land,” says Breece Robertson, now the organization’s vice president and director of planning and GIS. “My first job was to figure out how to measure equitable access to parks in L.A.”

“We started with very rudimentary analysis—half-mile buffers around parks, population density, and demographic data,” says Robertson. “We now have sophisticated models to look at who has access to parks and who doesn’t. We use GIS to overlay demographic and health information and climate justice information to determine where to focus our attention.”

The Trust for Public Land makes sure that each park it develops serves a diverse and underserved community. As it works with the community and public agency partners to identify the location for new parks, they use criteria that include: income level, park access, people of color, education, linguistic isolation, population under the age of 5, population over the age of 64, unemployment, and health criteria including factors such as asthma and low birth weight.

“We’re focused on the communities that need the parks the most,” says Robertson. “If there were two options on the table to work in a high-income area versus a low-income area, we would choose the low-income area where we’ll have the most impact.”

The organization tackles its parks and conservation work through four different mission-driven services.

“Our interconnected services are what set us apart,” says Robertson. “GIS pulls together all of our services and drives what we do.”

The Trust for Public Land has been involved in more than 5,300 park and conservation projects across the United States since the organization’s founding in 1972, but its work in Watts stands out.

Watts’ Serenity Park opened in January 2015, and the significance of its 1.3 acres cannot be overstated. Trust for Public Land staff worked to design and build a park that included the features the community wanted most. The park includes play equipment, an exercise area for adults, a skate park, and a picnic pavilion for community and family gatherings.

“Parks were the stronghold of our community at one time,” says Antwine. “After a very long fight, we prevailed, and the park is a place where the village comes together again.” 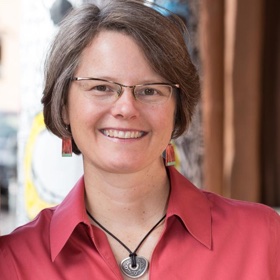 The Trust for Public Land’s mission is to create parks and protect land for people, ensuring healthy, livable communities for generations to come. “Embedded within that mission is equity, which is one of our core beliefs. Equity and fairness matter— and we are all the public in “public land.” In every project, we’re thinking about how to keep quality parks and public lands accessible and welcoming to all.”

vice president and Director of Planning and GIS at The Trust for Public Land
Breece Robertson,

The Trust for Public Land has a broader effort outside of its project-based work to spread awareness of the value of parks. The organization’s ParkScore® Index, now in its sixth year, can be used to assess and compare the quality of parks in the 100 largest US cities.

The ParkScore Index is calculated using advanced analytical capabilities of GIS to examine and promote the idea that all citizens should have a park within a 10-minute walk.

The organization secured a grant from The JPB Foundation to expand its efforts. A new ParkServe® data site and online mapping platform will analyze 13,931 cities and towns across the US, covering 80% of the population.

ParkServe is slated for release in the Fall of 2017. As part of the rollout, The Trust for Public Land is reaching out to mayors to sign a pledge to meet the 10-minute walk metric within their municipality.

“We’re using GIS to develop ‘What Would It Take’ tools,” says Robertson. “We can tell mayors that if you’re at 35% served and want to get to 50% served, here’s what it will take. It will show how many parks need to be added, and where they should go.”

A key element of this broader outreach and awareness is a new partnership with the National Park Service.

“We’re getting doctors to write prescriptions for kids and adults to go workout in a park vigorously for five days a week, instead of giving medications,” says Robertson. “Parks equate to public health.”

This is the first of a three-part series. To learn more about how GIS can support thriving communities, visit esri.com/smart-communities. The second installment discusses how Los Angeles County used GIS to assess parks countywide and the third installment speaks to the ballot measure to fund parks in perpetuity.