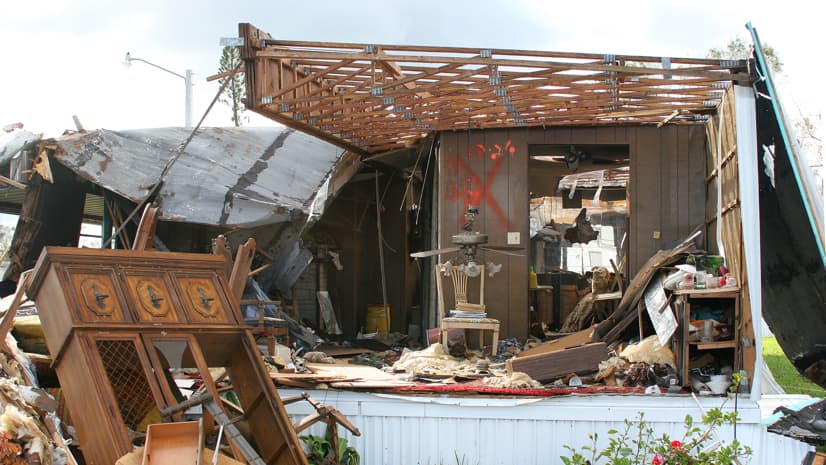 Disaster Survivors Get Help Steering through the Legal System

When the clouds parted following Hurricane Irma’s sweep across the Florida Keys, residents found both their beautiful islands and their lives in ruins. They desperately needed food, water, and shelter, but as time went on, the disaster victims also realized they needed legal assistance.

An RV Park on Big Pine Key was one of the few places where island hospitality workers, such as kitchen servers and housekeeping staff, could afford to live. Following the hurricane, residents returned to the park and found notices tacked to their doors. The notices stated they had to leave because crews would be sweeping out debris and removing damaged trailers.

Residents were given just a few days to pack up and move. Fortunately, at a clinic organized by two Miami-based civil legal aid organizations, a Key West attorney heard about their plight and offered pro bono legal help. He wrote a letter to the park’s owner explaining the tenants’ rights. Next, Legal Services of Greater Miami stepped in to represent each tenant, one-by-one, in negotiations with the owner to buy them more time to relocate.

Lawyers are among the wave of second responders when disasters happen, and many take up the needs of the legally vulnerable. The Florida Bar Foundation aggregates data about marginalized communities likely to be overlooked in recovery efforts. Then it uses location-based insights to raise awareness and raise funds, building the case about the effectiveness of legal services to help lobbyists seeking greater federal assistance.

Sadly, low-income families and individuals are the most vulnerable to the many traumas that come with disasters. They are the least likely to receive compensation from employers for time lost and the most likely to lose their jobs. The poor don’t have enough savings to pay rent or hire an attorney, so they are often quickly evicted. Other common factors that put the poor at risk of losing homes and going hungry are immigration status and language barriers. People living at and below the poverty level desperately need legal assistance in their efforts to recover.

Certainly, Federal Emergency Management Agency (FEMA) funding is available to victims living in disaster areas but navigating FEMA paperwork can be complex. Even if people successfully submit the necessary forms, FEMA relief may not arrive in time to prevent homelessness. Some victims may have their applications rejected while others, such as undocumented residents, are not eligible to apply. Many are on their own during these most difficult of circumstances.

Congress designates federal funding for legal aid (about $385 million nationwide in 2016), which the Legal Services Corporation (LSC) administers. However, one of President Donald Trump’s initial ideas to scale back government was to eliminate the LSC altogether. As Congress continues to wrangle over the Fiscal Year 2018 budget, the current House budget cuts LSC funding by 22 percent. Chief Justice Jorge Labarga of the Florida Supreme Court as well as leaders from The Florida Bar Foundation, The Florida Bar, and the American Bar Association have jointly lobbied Congress to protect this funding.

The Florida Bar Foundation, a group whose mission is to provide greater access to justice, has long compiled location-driven evidence about the civil legal aid provided by its grantees in an effort to measure impact and advocate for funding. At one time, they distributed several pages of narrative to each member of Congress with summaries and statistics. They have since realized that raw numbers coupled with lengthy explanations overwhelm representatives and require too much time to understand.

In 2017, The Florida Bar Foundation provided the Florida delegation to ABA Days in Washington with one-page fact sheets. These featured GIS-derived counts to convey to each of Florida’s congressional representatives the impact of civil legal aid on his or her constituents. The data revealed, by congressional district, the groups and numbers of people (veterans, elderly, abuse survivors, etc.) who would have been left on their own without assistance from Legal Services Corporation-funded organizations. The delegation was also armed with statewide maps showing the percentage decrease, by congressional district, in the legal services that would have been provided to each representative’s constituents without those organizations.

Representatives could easily see exactly how dependent their constituents were on LSC funding. Seeing the geographic context of the data customized to their congressional districts opened their eyes to the situation and improved their understanding of the need. One representative said that the geographic information made more sense than many of the presentations he had seen from other organizations that lobby for congressional support.

When Hurricane Irma hit Florida, The Florida Bar Foundation had dedicated $881,000, including more than $300,000 that it raised in just two months, to hurricane-related civil legal aid. It distributed these funds via grants that went to 16 legal aid organizations. To help grantees prioritize these funds where they would have the greatest impact, the foundation provided maps that showed the extent of the damage.

“We wanted to take a scientific approach to awarding grants,” Nancy Kinnally, The Florida Bar Foundation director of communications, said. “We also thought that having geographic data would provide useful information for our grantees as they strategized to deliver civil legal aid.”

The Self-Represented Litigation Network (SRLN) is a non-profit that provides mapping services to the civil legal aid community. The foundation retained SRLN to use maps and geospatial data to tell its story. The team devised a Legal Vulnerability Index (LVI) as a yardstick for measuring an area’s likelihood of needing legal aid. The LVI indicators include poverty, housing costs, native language barriers, rent, and health insurance. Combining the LVI with open-source data on ArcGIS Online about impacts, disaster declaration areas, baseline conditions, and federal assistance, the team quickly created a Story Map depicting the need for legal services by county.

As Florida’s second responders continue to fight for the state’s most vulnerable populations, location data provides critical evidence of the need, and proof that these funds make a difference.