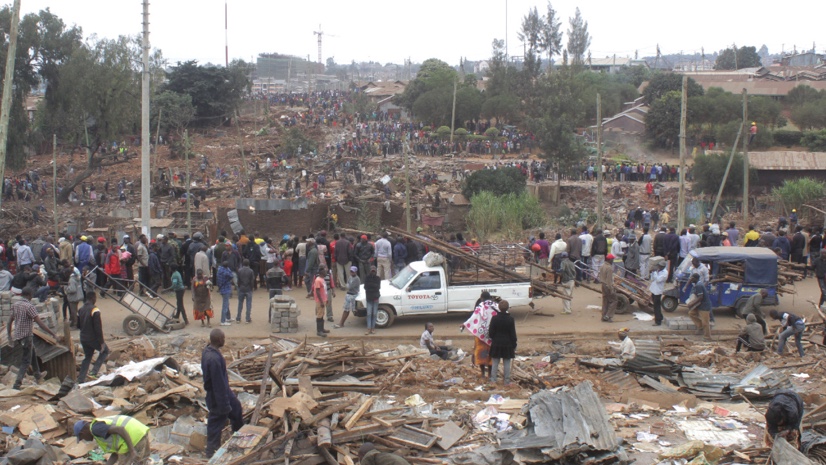 In early May, amid a citywide COVID-19 stay-at-home curfew, some 7,000 people in Nairobi, Kenya, were forcibly evicted from their home, a low-income settlement of Kariobangi. In the days that followed, a large swath of the area was demolished to make way for a sewer infrastructure project.

News of the housing crisis quickly reached Pamoja Trust, an advocacy organization for urban poor in Kenya. “The government was very vocal about their intention to expand sewerage plants in different places in Nairobi,” said Diana Wachira, program officer with Pamoja Trust. “We knew the evictions would continue if there was no reaction.”

Wachira’s team reached out to Cadasta, a global nonprofit that provides technologies to support land and resource rights. The Pamoja Trust team wanted a way to measure the human cost of further evictions tied to the planned sewerage projects so they could make an evidence-based case against further loss of housing. What’s more, they needed this information fast so they could boost awareness of the issue among at-risk communities before the projects continued.

Together, the Pamoja Trust and Cadasta teams reviewed the sewerage plans on a digital map created with geographic information system (GIS) technology—an approach that allowed them to access and communicate the data they needed, creating visualizations within a single day. “With a web-based platform, information is analyzed in real time,” Wachira said. “It’s a big shift in terms of technology and advocacy for land.”

They paired the locations slated for demolition with ready-to-use aerial imagery and population density estimates from Facebook’s Data for Good collection. A pattern emerged: each of the six demolition sites were near settlements like the one in Kariobangi. Should the sewerage plans move forward, over 70,000 more people from Nairobi’s poorest neighborhoods would be at risk of losing their home and community.

The Kariobangi demolitions were not the first time a government has forced evictions from lived-on land for a public works project. At the heart of the issue are questions of land rights: who owns the land, who can use it for what purpose, and what happens when ownership or use permissions change.

In Nairobi, the answers aren’t clear—because the communities impacted by the sewerage plans are urban informal settlements. According to the African Health and Population Research Center, up to 70 percent of Nairobi’s 4.92 million residents live in informal settlements. Despite being home to most of the capital city’s population, these areas do not receive basic public services, and residents have unprotected land rights.

“Informal communities are always deemed invisible,” Wachira said. “And they are excluded from rights because of that invisibility.” Without land rights, on paper, Nairobi’s informal settlements are merely uninhabited land that’s available for urban development—an interpretation that is often used to justify shortcutting eviction standards like advance notice, property loss reimbursement, or providing alternative housing.

But digital visualization tools bring the city’s landscape to life in a way that’s much harder to ignore. As the teams at Pamoja Trust and Cadasta set out to communicate what they’d learned about the sewerage plans, they created a publicly accessible, online multimedia story that showed the population density on maps with numbers of people affected and described the methodology and findings. This resource was urgently shared with community members and a coalition of local organizations, including Muungano wa Wanavijiji, Kenya’s federation of urban poor.

Activating the power of the community made all the difference. “Seeing the impact on these maps with this kind of proximity analysis, it gave people the urgency to act,” Wachira said. Local coalitions quickly mobilized to effect change with reports and petitions that were submitted to the government. The sewerage plans halted.

However, the delay is temporary by necessity. Sewerage in Nairobi is a critical issue: the city’s wastewater and clean water infrastructure are severely underdeveloped. Each of the six informal settlements impacted by the plans are near deteriorating facilities in dire need of improvement.

As a result of the efforts so far, the communities at risk can now be included in the conversations. They will have a voice about next steps, and appropriate accommodations can be made for residents who will be displaced by new infrastructure. According to Ezekiel Rema, president of Muungano wa Wanavijiji, “Such work is one of the best ways for informal communities to be informed—which enables fact-driven advocacy by the communities and stronger negotiation.”

This is exactly the goal of organizations like Cadasta and Pamoja Trust, which are driven by a concept in humanitarian work called data empowerment. Rather than stepping in and advocating for communities, they provide tools and information that allow community members to advocate for themselves—a sustainable solution that promotes long-term engagement in local policy.

“If you’re extracting data and seeing it digitally on a map, but not fully engaging the communities around that information, the outcome is very different,” said Amy Coughenour Betancourt, CEO of Cadasta. “The powerful advocacy piece comes from collaboration and acting as a catalyst for the community to mobilize.”

Data empowerment by nature relies on information. When it comes to empowering communities to protect place-based rights like land and housing, the information residents need most is likewise spatial in nature and best seen on a map. Understanding the physical size of a community, its proximity to infrastructure, or its population density, for example, validates the space communities occupy to residents and policymakers alike.

For informal settlements particularly, Olando Samuel, executive director at Pamoja Trust, said, “Conventional planning concepts do not appreciate their space and voice as part of the city. Spatial data thus provides an opportunity for them to be visible and to engage with the authorities in improving their lives.”

And, Wachira explains, for data-driven advocacy groups like Pamoja Trust and Cadasta, maps and location information show how people and place come together to create something that’s more valuable than the sum of its parts. “We really try to show where our communities are, what communities are doing, how communities are interacting with the spaces where they live—understanding that social-spatial relationship so that when, for example, there’s a threat of an eviction, you’re able to show the kind of loss they would have.”

Wambayi echoed the sentiment, saying, “In the case of these communities in Nairobi, these are people who have been living here for generations. They have homes, shops and business enterprises.” But without the technology to quantify and qualify their existence to decision-makers, these communities remain invisible.

Learn how GIS is essential for effective land administration and land records.