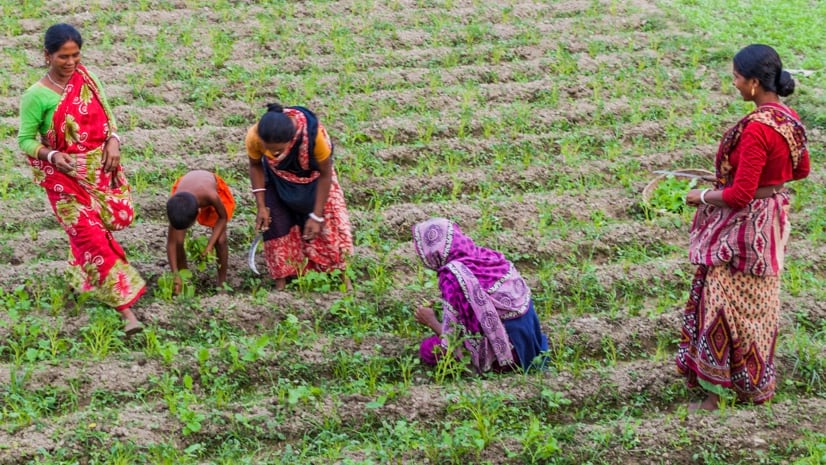 Women comprise 43 percent of the global agricultural workforce, but only 15 percent of them are farm owners—access to technology and information can help tip the scales.

Since the first seeds of civilization were planted, access to arable land has been central to human life. Yet even today, 12,000 years later, ownership of rich farm soil has largely been denied to one gender. Women, who make up half of the global adult population and 43 percent of the agricultural workforce, account for less than 15 percent of farmland owners. Nearly 40 percent of the world’s economies still limit women’s property rights, according to the World Bank. In the remaining 60 percent, male-centric cultural norms and legal inefficiencies still hinder women’s rights.

Ensuring women have the right to own land could lift millions of people out of hunger, reduce rural poverty, and improve sustainable natural resource management, according to studies from the United Nations (UN), World Bank, women’s rights nonprofit Landesa, and others.

Such sources also agree that achieving global gender equity will start with local efforts—often by putting more information in the hands of women.

“It’s about data empowerment,” said Amy Coughenour Betancourt, CEO of Cadasta, a global nonprofit that connects communities with technologies for recording land and resource rights. “We approach it as enabling local stakeholders to document, secure, and manage their land rights and helping communities understand and use the data that’s collected.”

The systems that govern individual rights to own, hold, or use land are frequently a combination of national laws and regional customs.

Under some systems, for example, a married woman’s legally inherited land—or a married couple’s jointly owned land—is considered the customary sole property of her husband. Widows, divorcees, or unmarried daughters could similarly be expected to cede control of their property to a male relative.

About one in five adults worldwide live with the worry that their land could be taken away from them, according to a 2020 study by Prindex, a research group that tracks global perceptions of land rights. Though the study found that men and women were nearly equally likely to feel insecure in their landownership, women were up to 21 percent more likely to cite divorce or spousal death as a possible cause of losing their land.

“Women are often workers, but they don’t get to be involved in decisions about which crops to plant, where to plant them, or what kind of agricultural practices to use,” Coughenour Betancourt said. Women are then left with little agency to support themselves or their family absent a male head of household—contributing to cycles of poverty and food insecurity.

Giving women the choice to take ownership of their land starts with building a better understanding of their legal rights, and that begins with capturing digital records. Better access to maps and property data can also simplify proof of ownership, which can be expensive and time-consuming to obtain, particularly in rural communities. In Mozambique, for example, Cadasta worked with local leaders and the National Cooperative Business Association Cooperative League of the United States of America (NCBA CLUSA) to make it easier for local farmers to get a certificate of landownership. Digital maps created with GIS technology eliminated several surveying steps, lowering time and costs from upwards of a year and US$400 in some cases to as little as three months and $30.

“Mozambique is a really good example of how the technology facilitates these processes,” Coughenour Betancourt said. “And the efforts in Mozambique emphasize women-led farms—women are given priority, and if the woman is married, she’s included on the certificate along with her husband.”

Coughenour Betancourt notes the importance of creating formal records and getting women’s names documented in land ownership. When they aren’t included in writing, women are particularly vulnerable to losing their homes or livelihood.

Where Equity and Efficiency Meet

Within the last decade, the UN has identified land and housing security, the role of women in agriculture, and women’s land rights as key indicators in meeting Sustainable Development Goals (SDGs) around poverty, hunger, and gender equality. Most of the world’s poor and hungry are women and girls. Focusing on women’s rights targets an especially vulnerable population.

Evidence also shows that the benefits of gender equity in land and resource distribution extend far beyond women’s empowerment, uplifting not just women but entire communities. Women lose an estimated 20 to 30 percent of farming capacity because of limitations placed on their access to land, tools, and education. With equal access, women could produce enough food to lift between 100 and 150 million people out of hunger.

In addition, Coughenour Betancourt said, “Women inherently invest more in their families with their income,” referencing a collection of studies from around the world that show improved outcomes in health, food access, and education when women are included in family land ownership. Women farmers are also more likely to grow crops that can feed their families and support local commerce.

At a time when COVID-19 has disrupted supply chains and thrust millions worldwide into food insecurity, leaders are looking for ways to bolster sustainable food systems that keep communities fed when global distribution fails. Evidence shows that women’s access to land and education can help fill the gaps by boosting local food production and growing nutritious, resource-efficient crops.

“A sustainable food system has many essential components,” Coughenour Betancourt said. “Three of which are land rights, climate-smart agricultural practices, and women’s empowerment. And one of the best ways to promote women’s empowerment is to give a woman a right to land.”

Land to farm has long provided for basic needs like food, shelter, and income. Beyond survival, though, land rights can be a gateway to a person’s financial independence, social mobility, and political inclusion. This cycle of opportunity is central to the sustainable future the UN SDGs enable. Transparent, accessible, and equitable systems empower more individuals, and in turn, create stronger communities better equipped to withstand the challenges of our time.

Find out more about how GIS is applied to the Sustainable Development Goals.