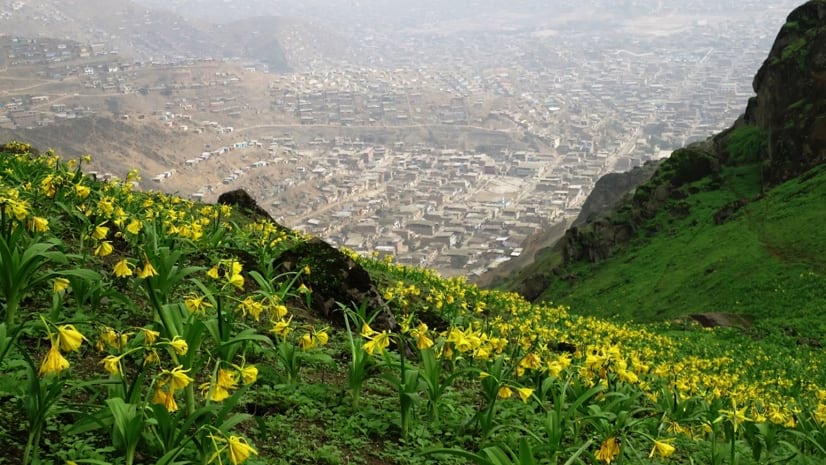 Often going unseen by the millions living below in bustling Lima, the ecosystem that’s unique to Peru and Chile’s coast has faced threats from land traffickers, feeding a demand for housing in the hills and mining for the materials to build them.

High in the foggy Peruvian hills, for just a few weeks in June, bright yellow flowers resembling tiny phonograph horns light up the hillsides. Known as the Flower of Lima, its naturally short, seasonal life, and the fog oasis it calls home are increasingly under threat.

Illegal land-grabbers have seized on an outsized demand for affordable housing as more Peruvians are pushed further from Lima’s established settlements. These land traffickers having staked and sold fraudulent claims to the soil the Amancaes flower (pronounced: ah-mawn-KIE-us) calls home, has led those desperate for housing to build structures on land that not only needs protecting but can be vulnerable to earthquakes and poses health concerns because of the pervasive humidity. The unmanaged development, including unsanctioned quarries where miners extract construction materials, has left behind damaged land unfit for plants.

The unique flora and fauna that make up the fragile ecosystems of this region’s lomas, or fog oases, has long been at risk of disappearing. In late 2016, the Lomas EbA project, an initiative directed by the National Service for Natural Protected Areas (SERNANP) of Peru and implemented by the United Nations Development Programme (UNDP) with support from the Global Environmental Fund (GEF), was born to preserve 19 of the estimated 100 lomas that only occur along the desert coasts of Peru and northern Chile.

“We can’t lose the only place where this amazing flower grows,” said Adriana Kato, a communications specialist with the UNDP group working to preserve the lomas.

The disappearing fog oases in this high elevation desert are at the crux of a demand for housing with about one-third of Peru’s population, nearly 11 million people, living in Lima. While poverty levels in Peru have dropped from nearly 59 percent to about 22 percent between 2004 and 2015, much of the population remains on the cusp of falling back into poverty. With a lack of housing strategy in Lima, unorganized development has encroached into the fog oases.

“It’s not just an environmental problem,” Kato said. As a recent UNDP report noted, the effort is aimed at addressing an “unprecedented complex combination of problems.”

With so many living in Lima, one might assume it would be easy to find environmental defenders. But the hills faced a unique challenge: few people have witnessed the land in its full glory because it’s covered in a blanket of mist from May to October. By the time the fog lifts, the land turns back to dry desert. Kato, who grew up in Lima, was among those who didn’t know about the nearby beauty until she joined the UNDP.

“Lima is surrounded by these fog oases, these green hills, but not many people know about them,” Kato said. “We have all this, but we don’t see it.”

The UNDP’s Maria Miyasiro, a geographic information system (GIS) and remote sensing specialist, started raising awareness by building a detailed geoportal to share local apps and maps including one named GeoLomas to allow anyone to explore the areas that had gone unseen. Local environmental leaders, often self-taught experts in botany and laws relating to the lands, have gathered data for GeoLomas using Esri’s ArcGIS Survey123 app on phones and tablets to input what they observe as part of a pilot project.

“I decided to build a web app so our stakeholders and our environmental leaders could do their own analyses and make their own maps,” Miyasiro said. “We started with just one application, the GeoLomas web map viewer, and then we elaborated with more applications created together with the stakeholders, organizations, and municipality workers, and using ArcGIS StoryMaps to publicize their work.”

Volunteers have been adding layers to the GeoLomas map including archaeological and cultural features, potential tourism locations, as well as land rights to know when an area was being illegally encroached on. The group worked closely with park rangers to record flora and fauna species they encountered.

The online map was described in a recent midterm review of the project as the “biggest advance” toward tracking conservation actions and improving transparency.

The UNDP team also set out to tackle several of the UN’s 17 Sustainable Development Goals: improving the environment for those living on the edge of Lima where there has been less access to green space, creating a sustainable and resilient city, as well as conserving the land and biodiversity of hill ecosystems, and reducing poverty by creating jobs in ecotourism and agriculture.

“It’s really necessary that people understand that the lomas are not the place to put their houses,” Kato said. “It’s really dangerous because of earthquake risk and for their health because of high humidity. It’s better to conserve them, and make a really nice and safe path, so people will visit them and use it for ecotourism, encouraging community members who may have otherwise lived in the oases to instead preserve the lands and launch enterprises for paying visitors.”

In an audit of the lomas project’s progress, a report noted that despite the complexities faced, “the balance sheet is positive in terms of will to participate.” In Lima, about 10 different local organizations now care for their nearby fog oases, in some cases starting nurseries to nurture new plantings and using a fog-catching mechanism to collect water for irrigation.

Before the creation of the online map, many didn’t know the physical boundaries of the land they were protecting. Now, on a smartphone using the ArcGIS Explorer app or directly in the browser using the Geolomas web application, they can see whether a house has been illegally erected inside the border or if a new road and plots for sale belong to land-grabbers, requiring them to call the police.

During the pandemic, outreach and training for contributions to the GeoLomas map shifted even further online, and leaders have leaned on more technology. Drone footage of the land has become a primary feature on the maps, helping to raise awareness with immersive video that allows anyone to fly over the scenic hills.

In a little more than four years, the work of organizers and the volunteer force of residents helped map and catalog information about this area. Details gathered provided the evidence needed for formal preservation of at least five of the oases, which are now part of a newly designated regional conservation area called Sistema de Lomas de Lima.

Now, the UNDP is devising a strategy for handing control of conservation efforts back to Lima’s government, including bringing housing, cultural affairs, and law enforcement officials to the table.

The team encourages private conservation developments and works with the Ministry of Culture to protect other fog oases that include archaeological features at risk of being lost. The team has also partnered with the Geological Institute of Peru to preserve unique geologic formations.

By collecting key data and mapping it with GIS, advocates were able to communicate the location of each fog oasis, identify local flowers and animal species, site nearby archeological locations, and offer details about pedestrian access.

Learn more about the value of a geographic information system for sustainable development.