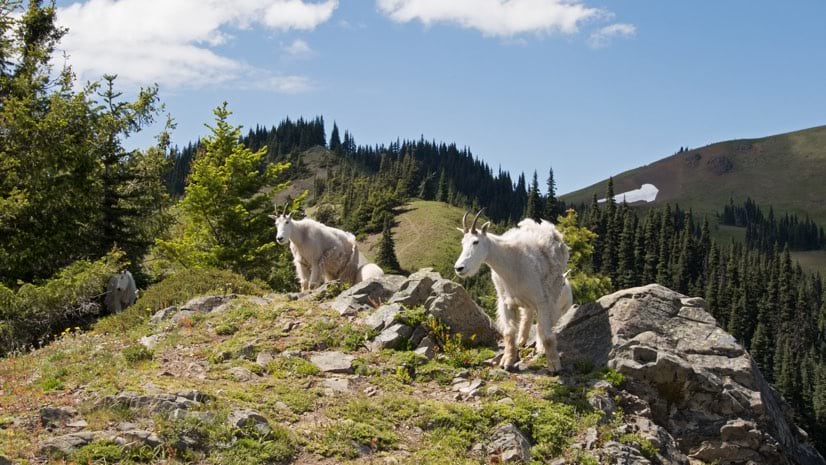 The Washington Department of Fish and Wildlife deployed location intelligence to relocate mountain goats that were not native to Olympic National Park.

In an orchestrated effort, 275 mountain goats were mugged in Washington’s Olympic National Park and Olympic National Forest. The encounters always end with the animals spirited away to a better place, never to set hoof in the park again.

This is true—professionals who humanely trap and transport large animals really are called muggers. And they really are targeting goats who inhabit this park in Washington state, but they have the best interest of the park and the goats in mind.

Through no fault of their own, the Olympic National Park mountain goats are interlopers. In the 1920s, when the area was not yet protected land, residents brought in mountain goats probably as game for sport hunting.

The goats made themselves at home. They thrived—perhaps a bit too much. Their only predators are mountain lions, which the goats evade by climbing to isolated peaks, and golden eagles, who prey on the young goat kids.

“The main reason for removing them from Olympic National Park is that they’re not a native species to the Olympic Peninsula,” said Rich Harris, the now-retired mountain goat specialist for the Washington Department of Fish and Wildlife. “They’ve done very well, but the park doesn’t want to be in the business of managing non-native species, or having them become a major component of the ecosystem. The goats were actually doing serious damage to plant resources that did not evolve in the presence of that particular herbivore.”

The removal process starts with the muggers spotting a mountain goat, then subduing the animal using a dart gun that delivers a sedative or a net that ensnares the animal. They fit the mountain goat into a harness that attaches to the undercarriage of a helicopter. The animal is flown to a staging area within the park, where a team of veterinarians examine it. If the goat gets a clean bill of health, the Department of Fish and Wildlife introduces the animal to its new home in the North Cascades Mountains—a native habitat for the species.

The Department of Fish and Wildlife and its partners on the tracking project (including the National Park Service, Treaty Tribes from Washington, and US Forest Service) do not take the issue of goat relocation lightly. They need to know the goats are in places as hospitable to them as Olympic National Park.

“We selected about 12 areas through a process of analysis that occurred many years ahead of the actual implementation,” Harris said. “The decision was based on where we knew the goats were likely to do well and where there were too few goats now, probably because, in the past, there had been too much hunting. There are a few places in the North Cascades where goats are already doing quite well, so those were not candidate habitats. There was simply no need for new goats there.”

The team used a geographic information system (GIS) to perform spatial analysis to find good new neighborhoods for the animals. “Our intent was to put them in summer habitats, so they’d look around and say, ‘Well, I’ve never been here before, but at least it sort of looks like home.’”

Improving the Process of Animal Tracking

Most relocated goats are fitted with GPS tracking collars. By using GIS and web maps to display and share collar data, scientists and wildlife experts are able to monitor the goats as they settle into their new homes. Prior to the introduction of lightweight GPS trackers in the early 2000s, animal tracking devices could only emit radio signals. The person doing the tracking could pick up the signals with a receiver, provided the animal was not too far away, and determine a rough location. The tracking did not leave behind any kind of trail, a record of the animal’s wanderings. If you weren’t there to track the animal, it was effectively offline.

“Across species and individual telemetry projects, we’re processing and displaying 1,500 new GPS locations daily,” said Treg Christopher, a species data systems manager with the Washington Department of Fish and Wildlife. “That means you can monitor more animals, in addition to providing better individual animal information, with less effort than what you could with radio telemetry.”

With GPS collars and GIS, officials tracking the mountain goats can now see where an animal roams, how much time it spends in one place, how fast it moves, and even whether it has died recently.

New Insights on Goat Movement and Habitat Use

A wave of data this large is essentially worthless without a means to manage and visualize it. Officials involved with the goat relocation program use GIS to display the GPS data on web maps. Because the system works with ArcGIS Online, the web maps and data are easily shared across organizations.

Having a system in place that facilitated data sharing was a critical component of this project because it is a collaborative effort among several entities including the Washington Department of Fish and Wildlife, several Treaty Tribes from Washington, the National Park Service, and the US Forest Service.  This project would not be as successful if these entities were not able to readily share information.

Based on the data, the goats have greeted their surroundings with wanderlust. “Almost all the animals moved away from the initial release site, not in the same direction, and not always together,” Harris said. “We expected they’d move around a fair amount, but they’ve done that even more than we expected, and there have been some pretty dramatic movements.”

The collars help the goat team monitor whether the goats were remaining in their new neighborhoods. The team also wanted to track any rise in the mortality rate, a normal short-term consequence of even careful animal translocation. “I suppose the other objective of being able to track them in near real time was to make sure they weren’t getting into trouble, going to places where they might cause conflicts with people,” Harris said.

Inevitably, some goats have ended up near people. Shortly after the first mugged goats were set free in September 2018, the system showed one of the animals finding its way to a popular hiking trail near North Bend, Washington.

Park officials contacted the Washington Department of Fish and Wildlife, concerned that the goat was too much of a hit with hikers. “They were people who weren’t accustomed to being around animals, and we were afraid they’d start feeding it,” Harris said.

On a Friday, the goat team mobilized a crew to apprehend the animal, but it eluded them. Wary of staging a mugging over the weekend, when the trails would be filled with hikers, park officials asked the team to postpone further efforts until Monday. The goat appeared to take a hint.

“By Monday, the tracking device was able to tell us that the animal had already moved off on its own,” Harris recalled. “It traveled 16 kilometers, right back to the area where we wanted it to go. And it’s stayed there ever since.”

Learn more about optimizing efficiency in field activities with the power of location intelligence.

Collars that provide GPS-derived location information have transformed the way scientists track animals in the wild. GPS makes it possible to not only track animal movement but also gather and automatically record an enormous amount of data. For most tracking projects, the recording medium for all this data is GIS technology.

For some projects, gathering and visualizing this data reveals sufficient insights. Just as a mapped record of your daily movements can reveal much about where you go, and with whom you associate with, animal experts can quickly glean information about the movement of tagged animals.

Some studies demand a more complex analysis. For these cases, displaying the data is only the beginning. Within the GIS environment, scientists can analyze huge datasets in search of patterns, trends, and hotspots. They can also use related data, such as elevation and weather patterns, to model the way the animals are likely to behave in the future under various scenarios. This flexibility is particularly useful when studying the goats living in some protected areas of the North Cascades. A GIS helped the experts make choices regarding optimal sites for relocation.

Finally, the GIS used in the goat project provides a common environment to share the data and communicate with partnering agencies.