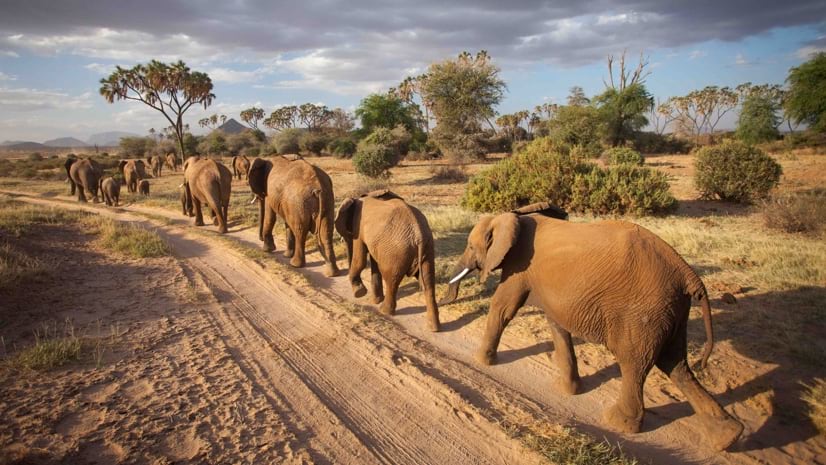 Since its creation 10 years ago, Space for Giants has grown rapidly, from an academic research project looking into the coexistence of people and elephants to successfully developing a conservation toolkit that is now being delivered across 11 African countries. Space for Giants supports national governments and local residents to manage human-wildlife conflict, promotes wildlife justice and the rule of law, and attracts investments to protect the natural ecosystems on which the continent’s elephants depend.

Securing space for Africa’s giants, as the charity’s name suggests, has been a monumental conservation challenge in today’s changing world—yet there is plenty of reason to be hopeful. Space for Giants’ success rests on its ability to make conservation a valuable industry for the communities surrounding the areas it protects, by improving livelihoods, reinvigorating landscapes, and promoting human-wildlife coexistence. Much of this work is guided by geographic information system (GIS) technology; Space for Giants uses GIS to gather and interpret the data that guides the organization’s interventions.

Space for Giants began in Laikipia County, Northern Kenya, where Dr. Max Graham initially sought to understand how elephants used space in increasingly human-dominated landscapes. “This work involved GIS from day one, to map  thousands upon thousands of hourly fixes of elephant positions and human-elephant conflict incident data to understand patterns,” said Maurice Schutgens, managing director of conservation at Space for Giants. “GIS has been key. Without a spatial visualization and understanding of elephant behavior, Space for Giants would never have been able to learn the valuable lessons that now guide our management interventions across 11 African countries.”

Space for Giants has extended its monitoring efforts to court cases involving wildlife crime and trafficking. The pioneering work of its wildlife law and justice department monitors cases from the moment of arrest to the point of the prosecution. The goal is to ensure that legislation is robust, that prosecutors are well-trained and equipped with the necessary tools to prosecute crimes, and that the court process is fair and transparent.

“[Wildlife trafficking] is worth $26 billion every year, so it has a massive corrupting influence on all the stakeholders involved,” said Graham, founder and CEO of Space for Giants, in a recent video. “I think more important than that, is the fact that it’s extracting biodiversity at an unsustainable level so that the ecosystems where these wild animals come from are no longer functioning like they used to.”

Space for Giants’ understanding of the movement of elephants has helped keep them safe across Africa. When elephants quicken their pace in a place where they normally feel comfortable, there might be a reason. If elephants no longer move through a known corridor, it may indicate a barrier (physical or psychological). Much can be gleaned from the movement of an individual elephant, and law enforcement teams can capitalize on this understanding to keep landscapes secure.

Space for Giants supports governments, law enforcement, and judiciaries with tools, monitoring capacity, and support that also help conservation efforts. As Space for Giants notes, poachers kill animals and rob future generations of the biodiversity that is a major source of enterprise and opportunity.

“If you want to practice conservation in Africa at scale, then the way to do it is to get a mandate from as high up as you possibly can,” Schutgens said. “Once you get to that higher level and are able to demonstrate proof of concept and build trust with national and local authorities, then quite quickly you have an open door through which you can create transformative change.”

Finding a Way to Fund Conservation

While conservation is among the noblest of pursuits, it is perpetually met with one common hurdle—a lack of sustainable funding.

As companies commit to carbon neutrality goals, carbon offsets have emerged as a valuable commodity. Carbon credits have become an integral part of Space for Giants’ financial roadmap, especially once the COVID-19 pandemic severely disrupted other forms of revenue.

“Tourism alone will never pay for conservation,” Schutgens said. “We’ve seen that with COVID-19, the Ebola pandemic, regional insecurity caused by civil conflict, and many more things. We must find more sustainable and equitable incomes, and carbon financing may fit that bill.”

In its simplest form, a carbon credit is proof that an organization has removed or avoided the emission of one ton of CO2 into the atmosphere. Credits can be traded by corporations, organizations, or individuals seeking to offset their emissions.

Africa’s landscape is diverse, and forests and grasslands differ in biomass and carbon potential. To estimate carbon sequestration values, Space for Giants collaborates with companies that perform the initial scoping assessments and land analysis, including gathering soil samples and tree measurements, to determine the carbon sequestration potential of the land it has conserved.

“We don’t select our areas based on whether or not we can develop a carbon project on them,” said Henry Van Der Does, Space for Giants’ head of Carbon Program Development. “But it’s good to know at the start, when you take on a landscape, whether it has potential for a carbon project because that has implications on how you finance and fund that respective protected area.”

In July 2022, Space for Giants signed a landmark comanagement partnership agreement with the Uganda Wildlife Authority (UWA) and nine district governments for Pian Upe Wildlife Reserve. This contract tasks Space for Giants, in partnership with the UWA, with the day-to-day management of the protected area and financing, while UWA retains complete regulatory oversight. Carbon offsets are poised to be part of the funding solution for the project.

As Uganda’s second-largest state-protected area (covering more than 2,000 square kilometers), Pian Upe represents an immense opportunity for conservation. The reserve is home to the country’s greatest diversity of mammals, including endangered African wild dogs and giraffes. Yet the benefits are not limited to ecosystems; more than 150,000 people living in the regions surrounding the reserve will be part of this restorative journey through employment, business, and education opportunities. The road map for restoring Pian Upe will require Space for Giants and UWA to apply all their conservation strategies.

Space for Giants continues to use elephants as a barometer to measure its success because if you can sustain a habitat that supports elephants, it can support almost anything else. Space for Giants credits national authorities and local partners for the outcomes it has achieved in recent years, but before any successes can be celebrated, it must find a way to reach a consensus.

“You must have data at your fingertips, and you need to present it so that everyone can digest and understand it,” Schutgens said. “I don’t know anything better than a map.”