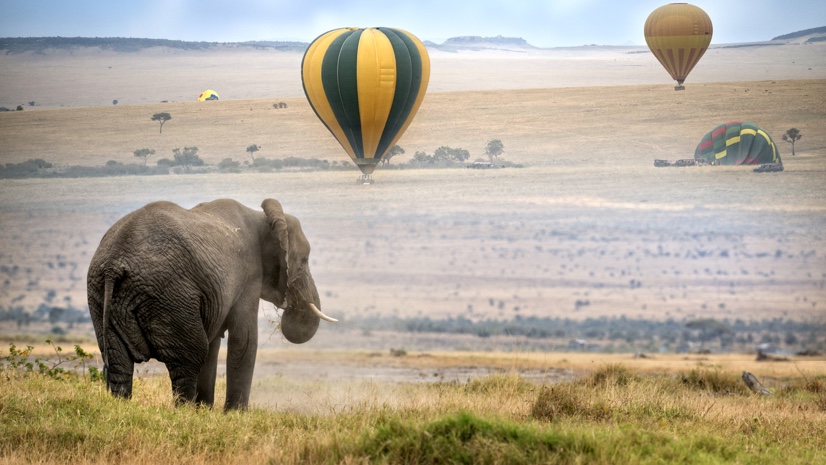 Researchers in Kenya’s Maasai Mara are working to create global awareness of the threats to the survival of Africa’s majestic elephants.

Elephants in the Maasai Mara traverse a wide range of both protected and unprotected land in search of food, water, and socialization. An increase in fencing and infrastructure development is making it more difficult for them to travel along their traditional corridors in the Mara. When elephants encounter a fence, they often bust through, and the damage creates mounting tensions with people.

Throughout Africa, elephants are now only using an estimated 17 percent of their geographic range due to the growing human footprint and a lack of protected areas. This increasing pressure has made data-driven spatial planning essential to the future of elephants.

“Increasingly… we’re moving toward data-driven conservation, where science is helping to inform our actions on the ground in a meaningful way,” said Jake Wall, director of research and conservation for MEP. “Because there is limited funding in conservation, MEP also has to be efficient in how we approach protecting elephants and their habitats in the Greater Mara ecosystem.”

A Territory in Transition

The Maasai Mara National Reserve is a savanna reaching more than 580 square miles and encompassing the Mara River, a critical resource for all species in the region. For decades, tourists have been drawn to these conservation and wilderness lands for the wildlife—elephants, lions, leopards, cheetahs, zebras, hippos, and wildebeests make their home here.

During the height of the most recent poaching crisis in 2012, 96 elephants were killed for their ivory in the Greater Mara ecosystem. Now, with declined poaching in the region thanks to the efforts of Kenya Wildlife Service, Narok County Government, and MEP, more recent estimates show that around 2,600 elephants call the Mara home, but pressure from human-elephant conflict is mounting for this iconic species.

Elephants are the earth’s largest land animals, weighing up to nearly 7 tons, and among the most intelligent of species, demonstrating the capacity to experience strong emotions. They are social, living in herds or multigenerational families, led by a matriarch. Males live alone or in small groups. They need up to 300 pounds of food a day, including grasses, roots, bark, and fruit.

These elephants live in an area where the human population, which includes the Maasai people, is growing dramatically—three times the global average. Farms and pastures are increasingly expanding, and new fences are being erected to protect personal property. When the fences don’t work against crop-raiding elephants, frustrated farmers often fire arrows or spears at the elephants.

“This is a war of space,” said Marc Goss, chief executive officer of MEP. “Everyone is trying to carve out a living.”

Technology Creates a Window into Their World

With human-elephant encounters becoming increasingly frequent, MEP is looking for ways to promote co-existence. “One of our big goals is to come up with strategies for how elephants and people could live together,” Wall said.

To find effective solutions, MEP wants to better understand the issues on both sides. With the help of a Vancouver-based developer, Neeraj Rao, MEP developed Terra Chart, an app for Android phones. The app is used to collect data on fencing, infrastructure, and other key ecological datasets like watering holes and salt licks. MEP then queries the data using advanced spatial analytics in GIS to help answer conservation questions.

In partnership with other organizations, MEP has created a spatial database called Landscape Dynamics. Through these efforts, the team documented nearly 2,500 miles of fencing in two years. These long-term changes to habitat, and the loss of range, cause a huge concern about the persistence of elephant populations in the Mara.

“The increased human footprint is affecting elephant movement, and people’s tolerance for elephants is decreasing,” Wall said. “So, we must adapt to focus on human-elephant co-existence. Our data is showing humans are one of the most important drivers of elephant spatial distribution and existing movement patterns.”

Now the goal is to get acquainted with the elephants even more intimately. MEP, through its long-term monitoring team, is recording individual elephant’s sex, age, and distinguishing characteristics as well as herd size and injuries in an online database called ElephantBook. Using markings on the ears and other attributes, researchers can identify elephants individually. GIS and tracking devices help researchers understand habitat preferences, movement corridors that need to be protected, and behavior. Through these efforts, they are learning just how fascinating and complex the elephants are.

“Elephants can be classified into three categories here in the Mara,” Wall said. “You have elephants that never crop raid—which is kind of surprising actually—we call them the teetotalers; and then you have the social raiders, elephants that raid from time to time; and then there are cropaholics, the elephants that are constantly crop-raiding.”

Strategies for long-term human-elephant co-existence focus on engaging people in wildlife. It is a goal that requires adaptation to the changing environment in the Mara. MEP trains local men and women as rangers who patrol unprotected areas of the Mara, and they continue to compile data for GIS analysis and maps that inform spatial planning and help engage and work with local communities.

The GIS tools have created an important window for global awareness, highlighting the dramatic changes taking place in this diverse ecosystem. The most urgent discovery MEP and partners are working hard to uncover in the Maasai Mara is long-term solutions for coexistence that saves elephants and their habitats.

“I can understand people’s view as a local landowner myself,” said MEP conservation officer Wilson Sairowua. “They assume that fences make sense to protect your property from elephants; however, what we found is that they are still breaking fences, and other animals are dying in the process. Fencing is actually worse than poaching because we are blocking animal corridors and we are losing wildebeest and giraffes every day killed by electric fences. We need a better solution and MEP is working to discover that.”