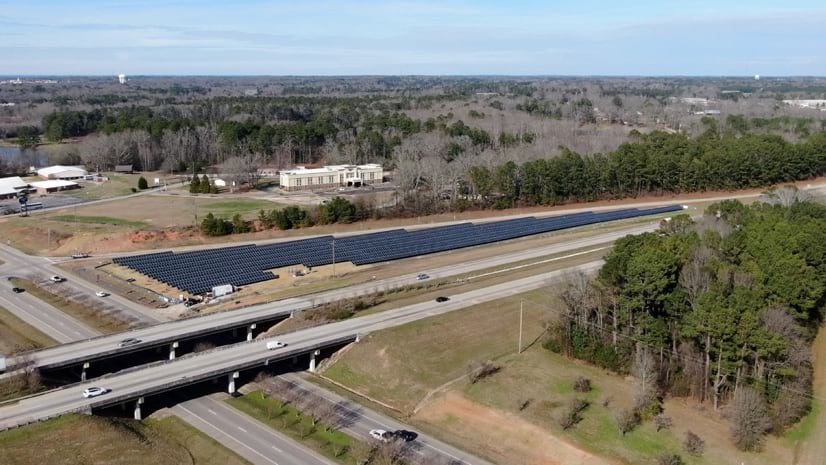 Geographic tools help locate and analyze often overlooked land within and alongside highways as sites for solar panel arrays.

An hour out of Atlanta and halfway to Alabama, the southbound I-85 freeway crosses US Highway 27. Unless your destination is LaGrange, Georgia, you’ll likely blow right past exit 14.

If you do take exit 14 after nightfall, you could easily miss the five-acre, one-megawatt array of solar panels that fills the grassy area of the diamond-shaped interchange. It powers the 50 LED streetlamps on this previously unlit stretch of asphalt, and excess electricity goes directly to Georgia Power’s grid. The Ray, an Atlanta-based nonprofit that partially underwrites this installation, hopes it serves as a guiding light for America’s sustainable energy future.

The exit 14 solar project exists on land that transportation planners call a highway right-of-way, or ROW. These are the buffer spaces—including shoulders, medians, rest stops, and turnoffs—that provide breathing room on high-speed thoroughfares.

A movement is under way to transform typically shade-free highway ROWs that sit outside the safety zone (at least 30 feet from the roadway) into sites for generating solar power. Georgia, Iowa, Oregon, and Massachusetts are among the states that have launched pilot projects that take advantage of the secure borders of freeway ROW, which are typically adjacent to electrical infrastructure and easy to access for maintenance. The Ray estimates many states have enough federal interstate freeway ROW land to support thousands of acres of solar arrays. Interchange acreage alone, like the ROW used for the exit 14 project, could generate 36 terawatt-hours of electricity, which is enough to fully charge 12 million electric vehicles each year.

The first step is locating and evaluating possible locations, specks within the hundreds of thousands of miles of highways in the country—over 47,000 miles in the interstate system alone.

Solar arrays require specific conditions, and their sheer size can be disruptive. To help find the perfect spots for arrays, The Ray used a tool developed by Esri to conduct geospatial analysis with a geographic information system (GIS), an approach it hopes becomes widely adopted by other organizations and transportation departments.

While working with open data from the Iowa Department of Transportation, The Ray began by using GIS to identify and display the state’s 238,000 acres of highway ROW. Various map layers revealed other attributes of interest for choosing the best sites, such as electrical lines.

The geospatial tool then allowed analysts to eliminate land they didn’t want to use, such as protected areas and high-density regions. Anything too close to railroad tracks or pipelines—or too far from electrical lines—was also automatically subtracted from the map.

The analysis returned the results of potential sites. The tool could then rank possible locations by suitability, considering such variables as solar radiation, a calculation derived from a 3D terrain model that showed elevation and trees that cast shadows.

The net result was 38,000 acres of prime solar-ready land. Based on the tool’s calculations, arrays on those polygons could produce five million megawatt-hours per year, worth about $400 million.

“The GIS analysis lets transportation agencies move from what they could do to what they should do,” said Allie Kelly, The Ray’s executive director.

The Ray takes its name from Ray Anderson, a former Georgia Tech football player who founded Interface, a company that pioneered the manufacture of carpet tiles for office spaces, in 1973.

Throughout the 1970s and ’80s, Anderson grew Interface into an industry giant. In the early ’90s, inspired by Paul Hawken’s book The Ecology of Commerce, Anderson looked for ways to clean up the petroleum-heavy industrial processes that are involved in making his company’s products.

“He called it Interface’s ‘mission zero,’” Kelly said. “The goal was zero waste to landfill, zero carbon, and zero fossil fuels.” Anderson became an early adopter of what we now call a circular economy.

Highway ROWs are not The Ray’s only focus. Exit 14 lies at one end of a stretch of I-85 nicknamed The Ray Highway, a living test bed for the organization’s transportation-related projects. But as an example of looking for ways to wring useful efficiency out of underused land, the ROW project best exemplifies Anderson’s vision.

The Ray is currently discussing 10 projects for sites across the country, including Austin, Texas, and Charleston County, South Carolina. Making these happen requires negotiations with local governments, contracted tollbooth and turnpike operators, and state-level transportation departments.

A highway right-of-way (ROW) is, for practical purposes, land that exists to exist, a necessary blank space on a highway’s fabric. Solar arrays not only add economic value to those lands but also provide a crucial, though less quantifiable, public service.

The Ray, a nonprofit that promotes the use of ROW land for these arrays, encourages transportation departments to plant perennial flowering plants on the ground cover of these sites. The plantings provide a haven for bees, butterflies, and other pollinators, many of them threatened species.

The GIS-powered tool The Ray developed to evaluate ROW land can show how much sunlight will reach the ground. Besides generating energy for people, a ROW can then also become a source of solar power for symbiotic flora and fauna.

“You end up preserving pollinator habitat for decades,” said Allie Kelly, The Ray’s executive director. “These arrays take land that was producing nothing and transform it into something special.”

To illustrate the scope and benefits of ROW solar projects, The Ray uses a GIS-based digital twin of a highway area. The detailed visualization, which includes a 3D representation of the landscape and the solar panels, helps stakeholders gain a direct contextual understanding of a project.

“Transportation engineers know about asphalt, concrete, bridges, and signage,” Kelly said. “When we start talking about solar panels, this is infrastructure that isn’t native to them. The digital twin normalizes it.”

The twin can provide an exact replica, including the size of the panels and the width between rows. It can take the viewer down to the ground level, and even show how the array will look from various vantage points.

“It allows a transportation department to get comfortable with a solar array, but it also allows transportation departments to think ahead to the community’s perspectives,” Kelly explained. A rise in the land, for instance, might mean that the solar arrays will impact local viewsheds. The tool can even show what someone of a given height might see standing on a certain point.

The digital twin tool can also provide real quantitative data to assess the economic value of ROW arrays. How much sun will the site receive, based on weather data? How much will the generated electricity be worth, based on local rates?

These questions are crucial, because a ROW solar array effectively puts a transportation department into the electricity business. A department might, for example, work out a power purchase agreement with a local utility. Perhaps some of the power could be used to increase the number of electric vehicle charging stations.

“Trying new things in transportation is just inherently risky,” Kelly said. “This tool is designed to mitigate those risks. It’s all about values and equivalencies.”

Learn more about how GIS creates digital twins of the natural and built environments.