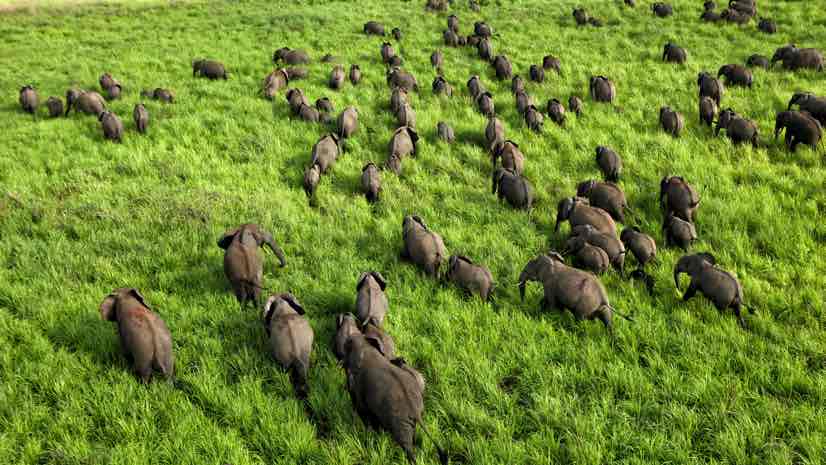 In 2017, officials at Garamba National Park in the Democratic Republic of Congo observed something alarming about the behavior of the 1,200 elephants they protect.

Many of the park’s elephants wear tracking collars and Garamba staff use a geographic information system (GIS) to study the animals’ movements on a digital map. The GIS displays elephants’ positions and movements in real time as icons on the map and the color of the icon reveals how quickly an elephant is moving.

On a computer screen, the staff could see when all the animals would converge hastily in one area of the park. This was not normal behavior for elephants, which typically travel in smaller herds led by a matriarch. Reports from park rangers on the ground confirmed that something was frightening the animals. Their instinctive response was to seek safety in numbers.

The data painted a clear picture of what was happening. Poachers, who hunt elephants and sell the tusks on the black market for ivory, had returned.

“This condensation of elephants happened at a time when we had a reasonably high number of collars and a high level of poaching,” Naftali Honig, Garamba’s director of research and development and anti-poaching information coordinator for African Parks, said recently. “I flew over the herd so I could see it for myself.”

The GIS allowed the staff to visualize the state of the assets the park protected, while firsthand observation validated the conclusion and helped rangers take action.

Confronting the Persistence of Poachers

Keeping wildlife in African protected areas safe from poachers is always a challenge. Familiar with the area and comfortable living off the land, poachers come and go with relative ease. The problem isn’t limited to Garamba. Increased poaching activity in Zakouma National Park in Chad devastated the elephant population, which dropped from 4,500 to 400 between 2002 and 2010. In the 1970s, Garamba’s herd included 22,000 elephants. By 2017, it had dropped to 1,200.

“In Zakouma, the herd was so condensed, they’d walk next to one another like sardines,” said Geoff Clinning, technology development director for African Parks Network, the conservation nonprofit that manages 15 protected areas in partnership with governments across the African continent, including Garamba and Zakouma National Parks. “That’s the only way they thought they were safe. They were running unbelievably scared.”

In the past three years, Garamba has reduced elephant poaching by 97 percent. The effort has included coordination with law enforcement and local communities—and a very shrewd approach to location intelligence.

GIS is often used by businesses to manage supply chains; in an interconnected economically transnational world, the technology helps people visualize the assembly of parts and the movement of products. Garamba’s staff members accomplished an inversion. They disrupted poaching’s illicit supply chain by using location intelligence to better understand the movement of poachers.

The strength of GIS is the way it presents multiple data sources as layers on the common canvas of a map. For Garamba, it allowed staff to see things that were otherwise hidden. Aerial photography analysis pointed to the expansion of trail systems. Wildfire patterns suggested new places poachers might approach or avoid. Poachers usually follow waterways, and GIS revealed probable river-crossing points.

The data helped direct the well-trained rangers toward places they were likely to intercept poachers. Arrests have increased, elephant poaching has been dramatically reduces, the population has been rebounding, and stability has returned for people and wildlife thanks to a combination of smart law enforcement and community development.

“Through our partnership with the Government of Chad, we’ve been able to secure Zakouma and the elephants are breeding again,” Clinning said. “They still hang out quite often as a group, but they’ll also go off and have time by themselves before returning to the main herd.”

“I call it a relaxation of behavior,” Honig said. “If a gunshot goes off in a remote corner of the park, the herd will immediately head toward the center, but we haven’t seen that agglomeration. We observe elephants by sitting next to them, but we’ve also had enough digital observation to see what different patterns look like.”

The worldwide appetite for the rhino’s horn—used in some traditional medicines and also coveted as a status symbol—has brought the animal close to extinction.

“A rhino walks around with $300,000 on the end of its nose,” said Geoff Clinning, technology development director for African Parks, referring to the high value of rhinos for poachers. “While the incentive for poaching will always be there, what this technology has given us is the ability to understand where that asset is. If you can track that animal, you understand where your high-value assets are.”

In 2017, 10 years after the last black rhino was spotted in Akagera National Park in Rwanda, African Parks and the Rwandan government began an ambitious plan to reintroduce the species. Over the past two years, 23 rhinos—drawn from zoos and reserves around the world—have made Akagera their home.

The stakes are very high. Fewer than 5,000 black rhinos exist in the wild in Africa. To maximize their chances of thriving in Akagera, the rhinos are surveilled extremely closely with tracking devices inserted into their horns. As with the Congo park, this sensor data works in tandem with more traditional protection methods, such as aerial surveillance and a dog-driven K-9 anti-poaching unit.

The decision to fit the rhinos with tracking devices brings African Parks closer to implementing a digital twin approach to system analysis, in which every real-world attribute has a virtual component in the geographic information system.

“The idea of replicating everything, I find that a very interesting concept for protected areas,” said Naftali Honig, Garamba’s director of research and development and anti-poaching information coordinator for the African Parks. “So many companies in so many sectors utilize that concept. They make a digital twin for everything, especially assets. And that’s a lot like what we do. It’s unrealistic to think we could put a tag on every single animal, but as the technology progresses, we can get closer to that digital twin.”

For African Parks, using the location intelligence capability of GIS isn’t merely a defense, a way to guard against illegal activities. Location intelligence also helps officials better understand the assets it protects. The parks are increasingly becoming sensor-heavy Internet of Things (IoT) environments. Rangers carry instruments that collect data and documenting animals presence in remote areas, with everything fed back to the GIS.

“The kind of IoT devices that are already used in industry and city environments are really finding their way into conservation,” Clinning said.

“Historically, the understanding was that a lion is a lion, a leopard is a leopard, and a cheetah is a cheetah,” Clinning said. “As we broaden that knowledge, we begin to understand that a lion can behave completely differently when it’s living in a forest in Ethiopia. We’re learning that in some of the remote places we now work in, there’s very little understanding of how a species operates.”

At Garamba, the many sources of sensor data come together in the centralized environment of the park’s control room. Data streams are processed and analyzed, in near-real time, giving park directors a global sense of activity in the park. Potential threats, such as fires and gunshots, appear on the GIS map, helping staff allocate ranger resources. Since elephants are so keenly attuned to poachers and other threats, the GIS effectively leverages the intelligence of these animals themselves to aid in their protection.

This enhanced knowledge also helps park managers better understand how human populations around the parks interact with the land. Location intelligence can help staff distinguish between poachers and refugees moving across the border that the park shares with Sudan. This lets the staff work with local populations who still depend on regulated harvesting.

This increased data gathering will inevitably reveal patterns that cursory analysis won’t detect. African Parks is investigating ways to apply artificial intelligence techniques to park management. Along with using GIS defensively to combat poaching and as a way to improve present knowledge, park managers hope to add a new layer. Machine learning will help them plan for the future.

“We’re getting to the point where predictive models can be very helpful for protective area management,” Honig said. “We want to replicate the way we, as humans, do protective modeling—but just make the machine do it better.”

Learn more about how location technology is contributing to conservation efforts and learn how you can help African Parks to secure parks for the benefit of people and wildlife across Africa.

(The opener image of elephants in Garamba National Park was taken by David Santiago Garcia and provided by African Parks.)

African Parks was challenged by information overload when it presented the array of GIS visualization and analysis options to those working in the control room at Garamba National Park.

Evan Trotzuk, cyberinfrastructure officer for African Parks, helped simplify the user interface and focus it on specific park security workflows using the ArcGIS Pro Software Development Kit. Coding the customized solution presented a slight learning curve to Trotzuk, because he hadn’t coded in C# before. He found resources on GitHub and soon figured out the basic syntax.