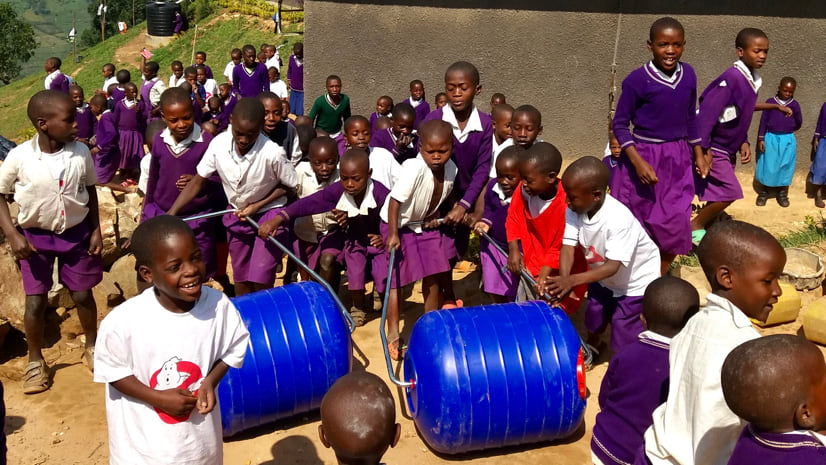 Grant Gibbs, the founder of South Africa-based water solution provider Hippo Roller, has worked for nearly three decades to increase access to water in communities around the world. Gibbs and his small team manufacture and distribute 90-liter rolling containers—named after the hippopotamus because of their rotund shape, thick walls, and association to water—to communities that need them the most.

Over two billion people—about a third of the world’s population—live in countries with an inadequate water supply. Access to safe drinking water affects the hygiene, health, education levels, and economies of entire regions, with women and children often suffering the most. Given the impacts of climate change, this problem will continue to intensify.

“It’s often the same across cultures and countries—it’s typically women and children who are tasked with fetching water,” Gibbs said. “The elderly also struggle, because they have to rely on the goodwill of their neighbors to haul water in jerricans or buckets, which are heavy and difficult to carry. The Hippo Roller is an appropriate technology and offers huge savings in energy and effort just to get water into homes.”

To date, 65,000 Hippo Rollers have been distributed in 56 countries, directly benefiting 650,000 people who can now more easily haul a collective 570 million gallons of water each year. The organization’s mission aligns with the United Nations Sustainable Development Goals by working to ensure the availability and sustainable management of water and sanitation for all. However, this impact isn’t widely known.

To spread the word about global water access, Gibbs and his team use geographic information system (GIS) technology. GIS maps illustrate their outreach and make the issue easier for people to understand. Recently, the organization expanded its application of GIS into a program focused on awareness and education for schoolchildren.

Telling a Story with GIS

After decades of working to improve water equity, Gibbs and the Hippo Roller team had a wealth of information to share but weren’t sure which approach would be most effective. A partnership with Visual Knowledge, a company that helps nonprofit organizations tell their stories with geospatial technology, shaped the legacy of Hippo Roller in the form of the Hippo Hub.

Visual Knowledge chief executive officer Scotty Westgaard calls the Hippo Hub an essential evergreen tool that raises awareness of an important topic. “We’re building a curriculum for children with lessons about water portability, sustainability, water cycles—anything and everything that has to do with this life-giving resource,” he said.

An integral part of the Hippo Hub is the ebook Hip, Hip Hooray—We Have Water Today!, which follows Hope the hippo as she explains the benefits of the Hippo Roller and the importance of water resources in terms that young readers can understand. The story’s goal is to ignite a passion for sustainability and equity that children will carry on throughout their lives.

Collaborating across Borders and Time Zones

A concerted team effort was needed to create the Hippo Hub. Visual Knowledge chief technical officer Elizabeth Ebrahimzadeh was eager to relay the impact of Hippo Rollers with geospatial technology, and Gibbs supplied much of the data that was needed to kick-start the project.

“We started with the Hippo Roller footprint. That was the first story that we wanted to tell. We wanted to take this data and visualize it in a way that intrigues people and draws them in,” Ebrahimzadeh said.

Building on that initial layer of information, Westgaard and Ebrahimzadeh recruited Edmond Chan, a graduate student in the University of Redlands Master of GIS (MGIS) program, to help create multiple stories, all of which are featured prominently on the Hippo Hub.

Chan says that the Rolling in Chad story is his proudest work. The interactive story contains an audio clip of traditional Chadian music; facts about the country, its people, and wildlife; and how it is uniquely challenged by water scarcity. The country’s location—landlocked in central Africa within parts of the Sahara Desert—is an important part of the story.

Telling the Hippo Roller story enabled Chan’s own education to evolve. “The project has opened my eyes and allowed me to harness the power of GIS,” he said. “It gives me an opportunity to look at every single African country, one by one, to learn about its history, climate, biology, ecology, and more. It’s a great way to tell a story and is a window for children to learn, not just about GIS but also many other topics.”

Taking the long view, Ebrahimzadeh sees potential for the Hippo Hub to expand into a living library of stories about the challenge of water access and how people are using Hippo Rollers to improve their lives. “There are people all around the world who use and understand GIS,” she said. “It would be so powerful to have individuals contribute by telling the story of their own country, their struggle to access water, and how the Hippo Roller has changed that in a visual way.”

Even at current rates of production, the Hippo Roller will only address 1 percent of the need for water around the world. Gibbs said that need and the demand for adequate infrastructure to transport water will only increase.

“People in the United States are even beginning to feel the pain of not having enough water,” he said, reflecting on years-long seasons of drought and various water crises. “We barely scratch the surface in terms of meeting the need worldwide. In South Africa alone, the need is still massive. There are millions of people who still struggle—they might have taps in the community where they live, but quite often, they never work, or the taps only work on the odd day when there’s water to pump through the pipes. It’s a really challenging situation.”

The Hippo Hub tells the story of such struggles at a level that people—even elementary age children—can grasp. Gibbs and his team see it as a significant step forward in raising awareness of water scarcity and solutions. In the future, the Hippo Roller team plans to use GIS to map water infrastructure to reveal inequities and further the organization’s humanitarian mission.

“Our focus has always been about simple ideas changing lives,” Gibbs said. “That’s what we’re wanting to do—we want to change as many lives as we possibly can. Hippo Roller is not a permanent solution, but it helps a lot, and it saves a lot of time. We just need to get as many out there as we possibly can.”

Learn how GIS helps nonprofit organizations and NGOs achieve measurable impact when they apply location information to their operations.