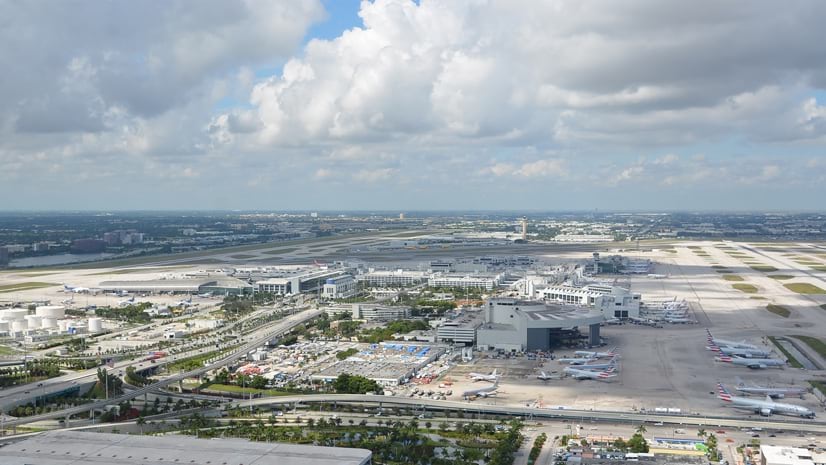 At MIA, an agile approach solved a tough digital transformation of the inspection process and led to an expanding role in location intelligence.

Key Takeaways
• Airfield inspectors at MIA now have an easy-to-use tool that records data and streamlines maintenance.
• The Enterprise GIS team from Miami-Dade County implemented the solution using off-the-shelf components.
• Executives at MIA have embraced how GIS has allowed them to visualize and become more proactive and look to expand the solution into other areas.

Miami International Airport (MIA) serves 1,000 daily flights to 176 destinations—moving more than 140,000 passengers daily—which makes it the 10th busiest airport in the US. For international travel and cargo, it’s the top US gateway. MIA’s flow of people and goods creates a critical economic engine for Miami-Dade County and the state of Florida.

Given the importance of keeping all that commerce and tourism in motion, MIA prioritizes quick mitigation of any issue involving any of its four runways.

Crews work in shifts all day, every day to inspect, maintain, and clear the airfield—including all paved areas where planes take off or maneuver—of even the tiniest piece of loose pavement; trash; or a part, such as a lug nut, that came off an airplane. The Federal Aviation Administration (FAA) calls these hazards FOD (foreign object debris), and FOD is a central element of FAA Part 139 inspections. FAA conducts regular reviews of airfield maintenance and can levee large fines if an airport fails to conduct regular inspections and keep detailed records.

“We can’t fail,” said Maurice Jenkins, MIA’s division director of Information Systems and Telecommunications. “So we make sure to have all the tools and resources available to ensure we rapidly address, respond to, deal with, and mitigate any disruptions in the most efficient and effective manner.”

Recently MIA adopted an all-digital workflow, replacing a paper-based inspection process with tablets running apps built with geographic information system (GIS) technology. The apps capture the location of every data entry, use pull-down menus to streamline record keeping, and can append a photo to text descriptions.

“It’s clear cut, it’s concise,” Jenkins said. “No one has to worry about deciphering an inspector’s cryptic notes or interpreting what that individual meant when they made that notation. There’s no paper to worry about—it can save hundreds of trees—and there’s no wait for someone to input the data. There are so many benefits, but mainly it’s about the processing speed and the increased accuracy that allow us to focus on what’s taking place on the airfield.”

A Change to Streamline Airfield Maintenance

Jim Murphy, the airport supervisor who oversees Part 139 inspections at MIA, has been involved in airfield inspections there for 40 years.

“We were getting ready for my first FAA inspection, and my supervisor asked me to look at the grass areas adjacent to the runways to make sure there weren’t any holes,” Murphy said. “And I found a vault with a wood roof over it that was rotting away. When I think of how far we’ve come, that’s my starting point.”

Over the years of daily inspections, Murphy and his crews have conducted inspections at increasingly finer detail, creating a safer airfield. “The regulations may not change much, but the level of what’s acceptable keeps getting tighter and tighter,” Murphy said.

Before the digital tools, Murphy wouldn’t see an inspection report until the next day, but now, he can see the data as it comes in. “The output from this inspection tool allows us to drill down further, focus more, track better,” Murphy said.

With the change from paper to iPads, there’s more flexibility for anyone to record any foreign objects they pick up during daily rounds. It’s a quick process. “That’s the flexibility we wanted for FOD because if we’re traveling across the airfield for a meeting and see anything, like a plastic bottle, we stop and pick it up,” Murphy said.

“With process change, getting a better map is always key,” Jenkins said. “If I’m looking at a map, I’m getting the detail to know what we’re dealing with. And dashboards give senior management a great level of visualization to know what’s going on as well. Everyone can engage and comment at one time rather than getting data later on, and we’re all working off the same sheet of music, so to speak.”

Miami-Dade County has been a GIS leader for more than 30 years, pioneering enterprise GIS approaches such as the sophisticated asset management system for the Miami-Dade Water and Sewer Department, which maintains the largest water network in the southeastern US. Before the inspection apps, MIA used GIS for planning and land-use decisions but not for operations.

Adriana Sanchez, the senior software developer and GIS analyst from Miami-Dade County’s Information Technology Department who led the implementation, shared that she’s learned a lot about airports and the complex and rigorous workflows that are required. Staff at MIA had learned about the predefined airfield inspection tool other airports are using and asked the county to investigate.

“We want to leverage all of the innovation possible to get a good, strong, integrated model of the airport footprint to maximize the delivery of our services,” Jenkins said.

Before the latest digital tools, a few prior attempts to replace paper didn’t work out. While there was frustration about that, it did capture an inventory of the different areas of the airfield, which meant the GIS-based inspection tool could be implemented more quickly.

Being able to visualize the data captured with Part 139 inspections has been a great help. When the FAA visited MIA for its twice-yearly review of inspections, instead of poring over papers to review inspections, the auditors could view all inspections in ArcGIS Online, look at inspections for any given day, and conduct their review more efficiently.

“Nobody likes having to sit there and read a lot of paper,” Jenkins said. “Having a visual representation and seeing everything within a dashboard lets us do better empirical decision-making on-the-fly to improve our operational efficiency.”

And with these results, there’s momentum to apply GIS to other challenges at MIA.

As Jenkins related, “We want to dive deeper, get training, and develop a GIS strategy for the airport.”

Big changes are coming to MIA to meet its continuing growth and projected demand of 77 million passengers and 5 million tons of freight annually by 2040.

In 2019, the Miami-Dade Board of County Commissioners approved a $5 billion airport improvement plan to take place through 2035. The plan includes concourse improvements, the construction of two on-site hotels, and the expansion of the airport’s cargo capacity.

To monitor the complex and carefully sequenced construction and renovation work, MIA has been developing a GIS-based digital twin to create a single source of truth for information and digital models.

“As we look at the digital twin, we’re going to go from 2D to 3D, 3D to 4D (adding time and scheduling), and potentially 5D (cost estimates and budget analysis),” Jenkins said. “We’re focused on getting rid of one-off solutions and mitigating disparate systems to tightly integrate business processes. We can create the go/no-go model to look at everything.”

Discover more about how GIS streamlines inspections and improves asset maintenance and management for airfield operations.

The airfield inspection apps that MIA crews use to inspect the airfield daily have been in use for roughly a year. It’s on Version 3 now, with regular input from inspectors and managers driving improvements and the updated schedule.

Version 1 was the off-the-shelf tool other airports were using, Version 2 addressed user input, and Version 3 automates text messages and emails to report issues. Now, an automated text goes to supervisors if an inspection hasn’t been completed by the end of a shift, and an automated email goes to the fire department for any pressing issues in their domain.

Version 4 is in development to add special and periodic inspections, including a workflow to capture any impacts from the frequent tropical storms and hurricanes that hit the area. Another special inspection will capture details of any aircraft incidents or accidents.

Version 5 will integrate with the airport’s work order management system to generate a ticket if anything needs maintenance or repair. A work order must be input manually now, but after the integration, it will become automatic. And a solution for wildlife inspection and mitigation will likely be addressed in Version 6.