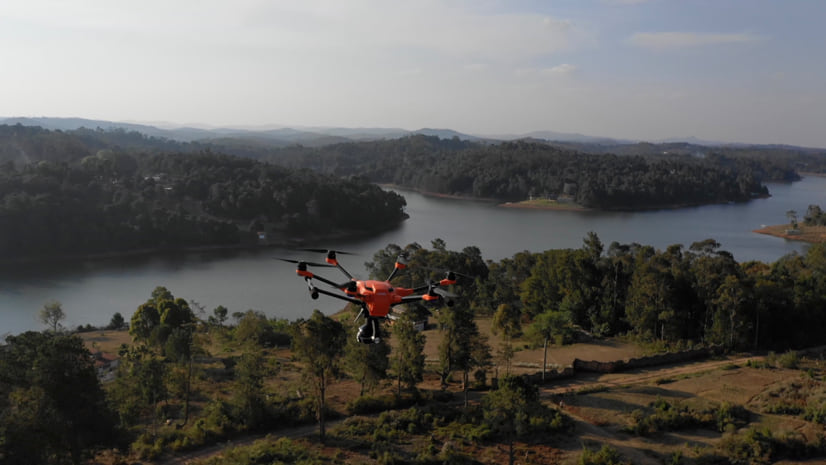 The Mozambique National Institute for Disaster Management and Risk Reduction (INGD) and World Food Programme (WFP) built the case for drones’ capacity to give all responders an accurate picture of cyclone damage and flooding extent.

The United Nations (UN) World Food Programme (WFP) responded quickly, with two helicopters to ferry supplies and rescue stranded people. Given flooded roads, the air support was crucial but not nearly enough to distribute food and find stranded people across such a wide area of impact.

“When your primary tool for flying over large bodies of water is a helicopter that costs $2,800 an hour, you need to find a better way,” said Patrick McKay, drone data operations manager for WFP.

Cyclone Idai was the first time WFP coordinated a fleet of drones for disaster response. The timing was right because WFP had conducted drone training with Mozambique’s National Institute for Disaster Management and Risk Reduction (INGD) to build in-country drone pilot capacity. Also, Idai was an unusual storm in that it parked over land, dumped rain for days, and flooded an area spanning thousands of square kilometers.

“Each time the pilots came back, they told us the flooded area had gotten bigger,” McKay said. “They’d go by a stadium, and people were climbing higher and higher in the stands every time they flew past.”

The drone pilots mapped the damage and searched for survivors, freeing up helicopter pilots to conduct rescue and supply missions. The images and videos the drones collected fueled updates to maps created with geographic information system (GIS) technology that let all responders see what was going on.

Drones are now standard for every WFP emergency response, used early and often to find out how many buildings have been damaged and how far floodwaters reach, scout for survivors, and map changing conditions.

WFP is usually among the first on the scene, because it has offices in more than 120 countries and leads clusters of UN emergency telecommunications and logistics staff who need to go in and set up before other teams arrive. WFP’s use of drones helps UN Children’s Fund (UNICEF) inspect schools, assists the World Health Organization (WHO) assess the status of clinics, and supports other UN organizations and in-country first responders rapidly understand conditions on the ground. GIS brings together drone-collected data—with details about people and structures—in purpose-built maps and apps to meet each organization’s mission.

“Before, only the people with access to a helicopter could see the damage and do assessments,” McKay said. “But now with drone pilots mapping in really high detail, down to two-centimeter resolution, we could share that information with everyone, and even do remote inspections.”

WFP worked directly with Antonio Jose Beleza, deputy director of National Emergency Operations Center (CENOE) at INGD. Eight of the pilots came from the Mozambique government, and with their local knowledge they began mapping where they thought people were and still might be.

Every day, drone teams would meet in the morning, disperse, and meet in the evening to coordinate activities and process images to update maps. Evening meetings were for coordinating the next day’s flights and the areas to cover. In the morning, the teams would assign people to ground vehicles, helicopters, and boats to reach flooded areas. The drone teams would check on villages, relate if they were flooded or clear, and document the people walking through floodwaters toward safety.

Synthetaic Automates the Search for People Surrounded by Floodwaters

Each drone flight can collect from hundreds to thousands of images that need to be processed and reviewed in order to reveal the most urgent situations.

The cyclones in Mozambique in 2019 marked the first time WFP began using a model with artificial intelligence (AI) machine learning algorithms to automatically find and classify damage to buildings, which removed the need for people to look at every image. But to locate people, a team of 20 people had to train the AI model over six weeks to achieve accurate results. This was not a workable solution given the time-critical nature of search and rescue.

WFP then turned to Esri partner Synthetaic, as part of a wide-area search study, to solve the more challenging problem of using computer vision to find stranded people surrounded by floodwaters. Synthetaic breaks images into tiles and employs an approach that doesn’t require a pre-trained AI model. With Synthetaic’s workflow, WFP was able to achieve helpful results to find people in water in a few days.

“That’s where our product RAIC comes in,” said Corey Jaskolski, president and founder of Synthetaic. “We can take completely unlabeled data, we don’t need any humans to label it, and we can search for things in the dataset by a single example query.”

Aided by AI in this way, responders could quickly send a boat or helicopter if the algorithm found a person in a tree surrounded by floodwaters.

The Mapping Effort to Prepare and Respond

Flooding in Mozambique had started even earlier, with Tropical Depression Desmond that dropped more than 400 millimeters (15¾ inches) of precipitation in less than 48 hours in Beira, the country’s second-largest city, in January 2019. The entire city was flooded, which led Beleza to try drones to assess the damage. “At that time, it was just me and my colleague Agnaldo Bila with two drones,” he said. “We couldn’t map very large areas, but we were able to cover critical areas and share the footage in real time. The images we collected on the ground were integrated in real-time and for the very first time into the European Union’s Copernicus Emergency Mapping Service, which was activated at the request of WFP to conduct rapid assessment of flooded areas.” The map helped establish accommodation centers in places that weren’t flooded and showed others in the government the value of drones and mapping.

“Initially, we were focused on disaster response, but we wanted to be proactive,” Beleza said. “Disasters will occur, and we want to be more prepared. We don’t want extreme events to turn into disasters anymore.”

Beleza and his team have been working with the Italian Centro Internazionale in Monitoraggio Ambientale (CIMA Foundation) on hazard mapping. The CIMA Foundation has created a hydrological model for the Buzi River watershed using satellite imagery, and recently drones were flown to improve the accuracy of the model.

“We flew the drones over 850 square kilometers of the Buzi River, then we processed the data and created a very high-resolution digital terrain model (DTM),” Beleza said. “When the rainy season comes, local governments can simulate floods and determine when and where the water will arrive downstream. We’re sure that this will trigger community early actions and save lives.”

GIS is used to look at different layers of data to model different flooding scenarios, design evacuation routes, and identify the safest places for accommodation centers.

“We combine science, technology, and local knowledge to prepare the communities and local governments in a participatory manner,” Beleza said. “Every year we are seeing more frequent flooding. That has motivated us to go there and do something for these people.”

WFP is greatly encouraged with how people in Mozambique continues to grow their skills.

“They’ve got the expertise and drone equipment, so when the storms hit this year, they didn’t call us because they knew exactly what needed to be done,” McKay said.

For Beleza’s team in Mozambique, the drones and AI analysis have been a game changer.

“We’ve been saving lives,” Beleza said. “We are taking the opportunity to learn from the drone deployments we have made so far to improve the way we deal with this technology when it comes to disaster preparedness and response.”

The World Food Programme (WFP) has conducted drone capacity training around the world, including Bolivia, Colombia, the Dominican Republic, Ethiopia, Guatemala, Myanmar, Nepal, Niger, and Peru. With the success of Mozambique, WFP is busy adding capacity in the neighboring countries of Madagascar, Comoros, Malawi, Lesotho, and Eswatini, where repeat flooding is a problem as well.

A recent potential addition to WFP’s drone kit is a prototype tethered drone to deliver Wi-Fi signal across an area of several kilometers. With this connectivity, the data captured by drone pilots could be uploaded after every flight, feeding maps in near real time and reducing the reaction time to help people caught in floodwaters.

“I think the future is drone swarms,” McKay said. “I want to put a laptop on the ground, add all drones, put landing pads around us and press a button. The drones would then fly out in a pizza pie pattern, where each goes and does its slice of the pie and comes back home.”

WFP is looking into contracting cargo drone services to carry out deliveries ranging from very small medical packages—under five kilograms—all the way up to multiple tons of food. This could help reduce the cost of airborne cargo delivery and allow WFP to deliver within conflict zones without putting pilots at risk.

Drones proved to be a powerful tool for WFP to deal with complex geography and reach places that lack road infrastructure. In Africa, where roads typically are washed away each rainy season, distances can be small but the amount of time to travel can be large.

“That’s the beauty of drones,” McKay said. “It doesn’t matter what’s underneath it—as long as there aren’t high winds or pouring rain, the drone can get there.” 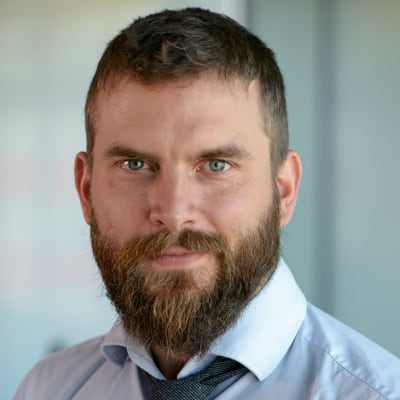 Olivier Cottray is director of Humanitarian Solutions at Esri, where he helps relief organizations get the most out of Esri solutions and develops best practices for the global humanitarian GIS community. Prior to joining Esri, Cottray led the Information Management Division of the Geneva International Center for Humanitarian Demining (GICHD) where he developed and implemented the Information Management System for Mine Action (IMSMA). Before focusing on remnants of war, he helped optimize and complement the logistics of cooperating agencies at the UN Joint Logistics Centre. He first applied GIS for humanitarian aid in 2002, when he helped found MapAction to provide rapid information management and GIS support following a crisis.