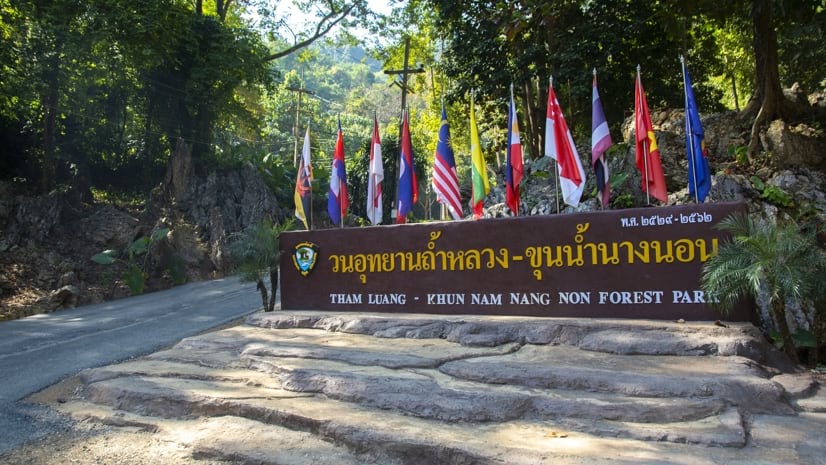 Ron Howard’s new film Thirteen Lives documents the plight of 12 boys, aged 11 through 16, and their 25-year-old coach trapped in a remote underground cave in Thailand in June 2018. During the response, people from different countries, cultures, disciplines, and backgrounds came together to save them. In fact, more than 10,000 volunteers joined forces to conduct an awe-inspiring rescue. The film spotlights an important truth that by working together, we can overcome complex challenges in our world.

The story is also a remarkable tale of using GIS for Good. Maps play a central role in the film because they helped coordinate swift action during a stressful time. The monsoon season added pressure because heavy rain threatened to make the cave impassable. Using maps, rescuers collaborated closely and combined their knowledge about the cave system and cave diving to devise a plan that ultimately freed the team.

Early on, the Thailand Department of Mineral Resources (DMR) brought together geographic information system (GIS) and mapping experts from Esri Thailand and GIS Co., Ltd. to create a portfolio of maps to help locate the trapped boys. Using GIS, different organizations involved in the search and rescue added their data and insights to build a holistic picture of the challenge. The maps showed the complete context of the cave from different perspectives from both above and below.

Staff from the Royal Irrigation Department surveyed the area’s geology using electrical resistivity techniques to determine the source of the water that was flooding the cave. Mapping experts interpreted the data to find sinkholes that might be acting as water funnels, and they created 3D maps to show where aboveground streams stopped and went underground.

With this range of maps, responders modeled the terrain and determined where diversions could be built to reduce the flow of water into the cave. A collaborative team comprised of engineers from the Department of Royal Irrigation, experts from the Department of National Parks, Wildlife and Plant Conservation, and soldiers from the Royal Thai Army worked together to construct dams and install pipes that diverted water onto nearby rice paddies. Despite incessant rain, water levels within the cave started to drop.

As rescuers journeyed into the cave in search of where the trapped team was located, they marked their progress on a map, recording the maze of passageways and chambers to make sure they did not miss an area of the cave in their search.

Rescue divers used maps of the cave system to study all the twists and turns and guide them through murky water to reach the trapped team.

As the mission shifted from search to rescue, maps relayed near real-time readings of oxygen levels and changes in water depth. These maps kept everyone focused on the immediate tasks at hand. As the story riveted people around the world, it became a matter of national pride to use the maps to show how many people were working together and how their collaborative action achieved a remarkable outcome.

In the Thai cave rescue, a dedicated group of professionals put their mapping skills to the test and marveled at how the maps quickly became the universal language for a coordinated response. The rescuers have shown us how maps enhance understanding and speed collaborative action, both vital powers when addressing today’s urgent challenges.

Shared maps have a way of simplifying complex matters, and they provide a way to coordinate decisions while ensuring that diverse perspectives are considered. The shared map isn’t your map or my map, it’s our map. It provides a common ground for us to work from and a way to prioritize what we want to achieve.

We see this same scenario with maps in the response to oil spills, earthquakes, floods, hurricanes, wildfires, famine, social unrest, and pandemics. With climate change, many communities are facing new extremes that are exacerbating racial and social inequities. Maps are helping plan, adapt, and add resilience, providing insight into more equitable approaches that help those in greatest need.

Using a geographic approach, we can look across the social, economic, and natural systems at play to devise methods to address complex challenges. Maps help gather diverse perspectives to find common ground that moves us toward a more sustainable future.

Thirteen Lives shows that in a time of great need, selfless people come together, each providing their perspective and expertise, each making their contribution to a map that has a profound impact on the outcome. We work best when we work together, and together we have the chance to maximize our positive impact on the world.

Learn more about how GIS helps organizations maximize the impact of their work on people, the planet, prosperity, and peace.