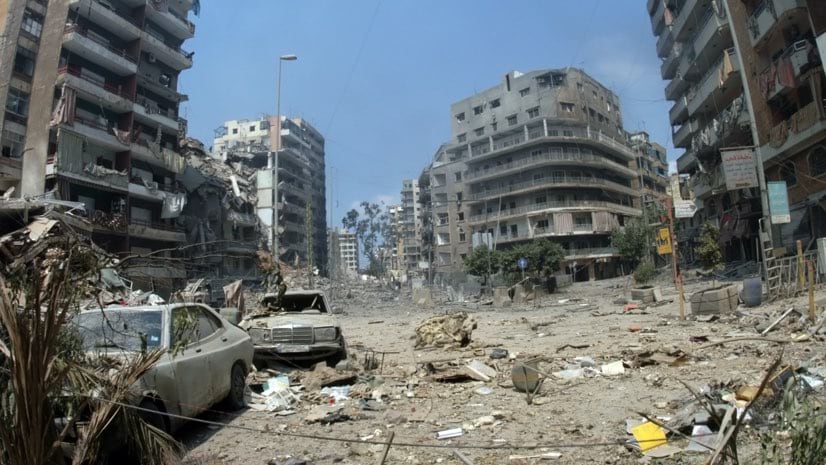 The explosion that rocked Beirut, Lebanon on August 4, 2020, was at least 10 times bigger than the impact of the largest conventional bomb. The blast coming from improperly stored ammonium nitrate unleashed shock waves of destruction across more than 12 square kilometers. In milliseconds, much of the center of the city was reduced to rubble, more than 6,000 people were injured, and 190 people lost their lives.

When urban destruction from blasts or earthquakes require a team with special skills, members of INSARAG respond. This time, they were guided by a new level of situational awareness based on apps and dashboards built with geographic information system (GIS) technology.

“We arrived 22 hours after it happened, traveling through the night,” said Martijn Boer, the headquarters coordinator of the Dutch urban search and rescue (USAR) team USAR.NL and the African, European, Middle East representative on the INSARAG Information Management Working Group. “We saw cars crumpled like paper, containers imploded and exploded from both the blast and the blast back, and large ships lying collapsed on the shore.”

Despite the destruction, on the way to the blast site he saw children cleaning streets with brooms, people playing sports in a park, and diners in cafes.

“The resilience of the people was amazing,” Boer said. “Even entering the blast site, there wasn’t chaos, although it looked like nothing was there at all anymore.”

INSARAG has been developing a common methodology across teams who respond to countries experiencing events of structural collapse. The group coordinates agreements ahead of time and simulates events and information sharing to streamline collaboration during actual disasters. Teams are comprised of many specialists, including rescue workers, dog handlers, paramedics, chemical specialists, safety officers, administrators, communications staff, planning officers and logisticians.

“Our teams primarily specialize in rescuing survivors from collapsed buildings,” said John Morrison, a planning section chief with the Fairfax County Urban Search and Rescue Team, and the Americas region representative on the INSARAG Information Management Working Group. “Explosions aren’t typical, thankfully, but they do require the same skill set.”

Boer and his team were deployed to Beirut where they tested INSARAG’s new capability of real-time tracking and information sharing between field crews. The system delivered a new level of coordination because of a shared awareness of team locations and up-to-the-moment understanding of the status of their missions. The solution uses cloud-native components of the ArcGIS platform—Survey123 to collect information and Dashboards to display it.

Because the system was hosted in the cloud, members of the INSARAG network could help support those in Beirut by processing and analyzing data no matter where they were sitting around the world.

“A colonel from the Lebanese Armed Forces came in with a map of the area that was divided into search sectors,” Boer said. “I captured a picture and sent it out to the team, and within 10 minutes that map appeared on the dashboard.”

A few days after this update, a press conference was called. A top general in the Lebanese Armed Forces wanted the dashboard in the background as he spoke to the international press.

“He wasn’t the only one to immediately fall in love with the system,” Boer said. “We all like how it provides an overview of what’s going on.”

The system captures a number of different data points about the teams, and the scope of the work. Each team fills out a fact sheet about who they are bringing, how many dogs, where they are setting up their base of operations, and how to contact the team. The system also contains reconnaissance details from teams that quickly assess each building, the amount of damage, and the potential that survivors will be found. The coordination center then analyzes this information to prioritize rescue work.

“One of the sayings at the UN is that coordination saves lives,” Morrison said. “The app is so much faster during the transition from reconnaissance to response, and we don’t have to dedicate people to just doing data processing. Instead, we get a lot of people looking at the data and making decisions.”

The ease of use of the system was key to quick adoption, because in the middle of a response everybody is doing three jobs at once and each job has the highest priority.

“The training is easy—grab your phone, download the app, open the survey, fill in the form,” Boer said. “That’s it, four steps.”

On the back end, a global team reviews the incoming data for quality assurance purposes.

“We don’t want to make bad decisions faster because of bad data,” Morrison said. “The data the field crews record are reviewed so we don’t put 1,000 victims trapped, if instead they meant 10 or one. Records are held so they don’t appear on the dashboard until someone on the team reviews the information.”

The old reconnaissance process involved hours of data entry in a spreadsheet, and as soon as data was printed, it would be outdated. The new system provides an overview that’s refreshed every minute.

“It’s funny how your brain works,” Boer said. “I’m getting too used to the fastness of the data, because when I know teams are filling out data, 60 seconds feels like a long time.”

Twelve teams of three or more people used the field tools in Beirut, and a global group of interested people around the world watched the dashboard.

“Because the system is accessible remotely, my boss doesn’t have to call me in my base of operations to ask how the operation is going,” Boer said. “He can see it for himself at any time of day, he can filter it, and it saves so much time and effort that everyone has access to all the information they need.”

Testing and Replicating for Future Instances

The workflows of the response, along with lessons learned, get input back into the system to improve the response to future instances. The system is available at all times for training purposes, and as a sandbox for teams to test and try to get familiar with it.

As a team identifies a new scenario to train against, the system allows them to quickly replicate all the operational maps and apps they will need, ensuring they train on the exact system they will use on the next deployment. The same technology also allows INSARAG to quickly activate no matter where, or when, the next emergency strikes.

For this dedicated group of responders who are often rushing to the scenes of natural and human-made disasters, the job comes with danger and risk. But, as teams see time and again, it also comes with rewards.

“In 2017, we responded to damage from Hurricane Irma in Saint Martin,” Boer said. “At first people were devastated, sitting in the streets, not knowing where to start. Then we began cleaning up the schools, and the children saw it and told their parents and soon we had a large group. People get hope from our teams, seeing we haven’t forgotten them, and that we’re here to help them get back on their feet.”