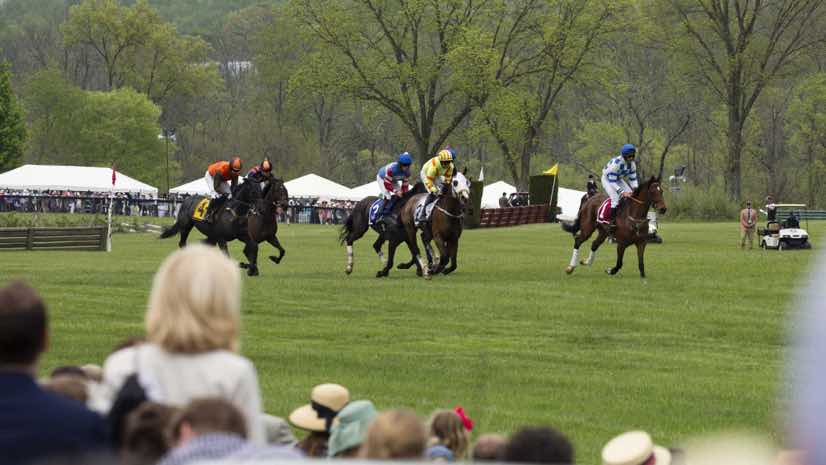 Each spring, on the first Saturday in May, equestrians and fans gather for the Virginia Gold Cup steeplechase horse race. This event sits atop the social calendar in Virginia’s horse country—the epicenter of the nation’s horse and hunt community.

Competitions for tailgating, wide-brimmed hats, and wagers on the winners—along with a steady flow of the event’s Mint Julep signature cocktail—can prove to be a volatile mix.

The event attracts close to 70,000 participants, turning a rural corner of the county into a density of revelers the size of a small city. To help contend with the event’s complex security demands, organizers recently started using real-time geographic information system (GIS) technology.

“Everybody’s cooped up for the winter and they come out dressed in their best clothes to let their hair down a little bit,” said Ray Acors, division commander of the Fauquier County Sheriff’s Office. “When you get a lot of people drinking alcohol, some tend to make bad choices.

“We want people to have a good time, so we’re being discreet but still enforcing the laws and making people feel comfortable and safe,” Acors said.

The origin of this type of horse race traces to Colonial times when races would begin at one church steeple and end at another, with stone walls and stream crossings adding danger and spectacle to the race.

While horse racing in the region has been popular for a long time, the Gold Cup was formalized in the 1980s with the donation of a 380-acre property and the formation of the Great Meadow Foundation. Pari-mutuel betting was added in 2013, and the event has steadily grown in size ever since.

In addition to the spring Gold Cup race, an International Gold Cup event takes place every year in October, drawing a smaller, more sedate crowd of less than 35,000 spectators. The most recent fall event provided a good testing ground to roll out real-time technology.

Visibility on a Complex Course

The race plays out across a broad field. Around the edges of the field, large white sponsor tents host guests for catered sit-down meals, rail spots allow spectators to watch the race behind temporary fencing, and parking areas fill up with tailgating revelry. The complexity and expansive geography of the event make it difficult for law enforcement who need to ensure complete coverage and the ability to respond quickly should an incident occur.

“There aren’t many permanent structures, so our standard aerial imagery doesn’t reflect the infrastructure of the day,” said Dan Stell, GIS analyst with the Fauquier County GIS department. “We used a drone to capture up-to-date imagery of the course.”

This imagery provides the backdrop for map-based apps distributed on 64 smart phones provided by Verizon to emergency medical services personnel, the Virginia State Police, and Fauquier County Sheriff deputies. The phones allowed each person to be tracked on a large dashboard in the command bus parked at the event. Each person with a phone could record and share incidents in the app and see the location of others on the map—all using a current map showing where the temporary structures are located around the field.

“Adding this capability as part of our Incident Action Plan helped us to have an integrated response between local and state agencies,” said Stacie Neal, deputy director and critical infrastructure program manager with the Virginia Fusion Center, who was integral in bringing  together people and technology for this test. “Using a common and current map, combined with real-time first responder and incident locations, provided great situational awareness for all the partner agencies.”

The race runs for an intense eight or nine minutes, with video feeds broadcasting on big-screen televisions spread throughout the course, and a race announcer giving a lively account of the show. After this short burst of activity, everyone goes back to partying.

“There were a couple of jockeys that fell off horses, which is expected, however, no injuries were reported, which is phenomenal for an event like this, and no real violations of the law,” Acors said.

Throughout the event, dispatchers kept close tabs on the locations of first responders. This gave officials the ability to send the closest officer to an area of concern rather than using the traditional approach of dispatching the officer assigned to the area who might be farther away from the incident. The same view of real-time first responder’s locations and incidents was duplicated at the main communications center at the Sheriff’s Office seven miles away in the event more resources were needed if a large incident occurred.

“We worked really hard to make sure that it was a simple application to use,” said Drew Fioranelli, GIS Director for Fauquier County. “We were very direct and concise about how to use the applications, and all the officers had to do was to have the device on their person for the real-time capability to work.”

This is one of the first times that all the technology has come together in such a rural area for such a large event. The lessons learned, and the successes, will go a long way in managing the more hectic Virginia Gold Cup steeplechase horse race in the spring of 2019.

“The radio traffic was cut in half, and communication was quicker because we could see our assets in the field in live time,” Acors said.

The Parts of the Solution

For incident response at the Virginia Gold Cup, planners have long created maps.

“In previous years, we’ve just relied on static paper maps that we would produce for law enforcement,” said Dan Stell, GIS analyst with Fauquier County. “Every year we would have to digitize the locations of tents and map access points and staging areas. Using a drone really changed the view and made it much easier to deliver an up-to-date map.”

The drone imagery was processed using Drone2Map for ArcGIS, adding labels to the imagery rather than mapping each feature to greatly reduce the time it takes to capture course details.

The Fauquier County Sheriff’s office deployed Survey123 for ArcGIS for incident mapping. This application provides a survey function with pull-down menus and built-in location so that field personnel can log and share incidents as they happen.

The security team used Workforce for ArcGIS to track assets in the field in real-time. Operations Dashboard for ArcGIS allowed them to display and share different views of live information at the command center and share that same live view with the state fusion center, which is a collaborative hub of state, federal and local law enforcement working together to prevent and respond to terrorist and criminal activity.

The dashboards incorporated live traffic, weather feeds from WeatherOps and AccuWeather, mentions of the event on social media provided by DataCapable and news feeds of events in the surrounding area provided by NC4. Any incidents logged by officers were displayed by location and aggregated by type.

“My vision is to incorporate this capability into daily operations,” said Ray Acors, division commander of the Fauquier County Sherriff’s Office. “We can track vehicles, but we can’t track people deployed outside of their vehicles. We have a lot of wooded and mountainous terrain, and I hope we can keep better track of our folks and deploy them directly to any issue within my lifetime.”