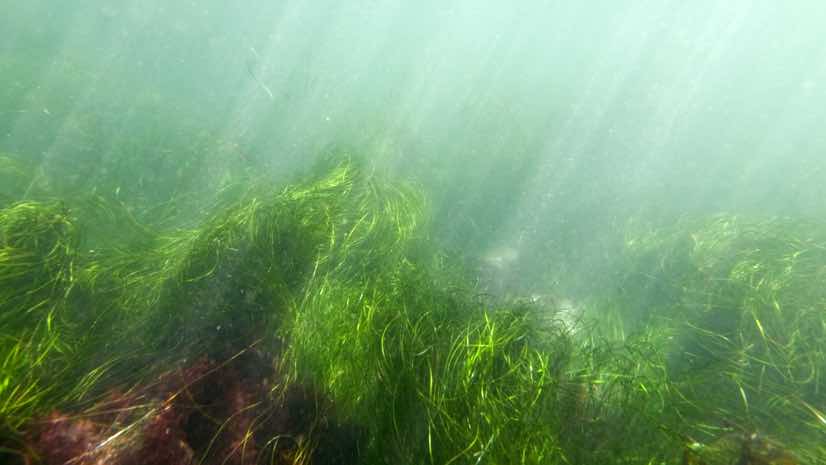 Researchers Deploy Drones and Make Maps to Study Cause and Effect

While the ocean covers more than 70 percent of the earth, the National Ocean Service estimates that 80 percent of it is unmapped, unobserved, and unexplored. This statistic even rings true for readily accessible waters in the coastal zone. But the situation is changing due to new technologies and an eagerness to understand how coastal ecosystems work.

Confronted by the confounding loss of 7 percent of sea grasses each year, scientists see a growing need to observe coastal habitats. Sea grasses—the forests of the ocean—nourish the food chain, contribute vital habitat for fish, protect shorelines from erosion, and filter out pollution.

Most prevalent among US West Coast sea grass is eelgrass, which suffered dramatic losses from eelgrass wasting disease. With a recently awarded $1.3 million grant from the National Science Foundation, a team has set out to monitor and probe the cause and impacts of this disease over a three-year span. The multidisciplinary team of scientists and technologists, including marine biologists, geographers, and computer and data scientists, will investigate the problem using tools such as microscopes, drones, and artificial intelligence (AI).

“What I think is exciting and innovative about this project is that we’re doing this in a pretty intensive way at sites from California to Alaska,” said Emmett Duffy, director of the Marine Global Earth Observatory (MarineGEO) headquartered at the Smithsonian Environmental Research Center. “We’ll get a good picture of how variable the effects are and hope to gain a deterministic picture of how the disease varies with temperature variability, at different points along the coast, and with changes in the animal community.”

Biology in the Water

Over the course of three years, scientists will monitor the disease from many angles. The team will survey sea grass beds in 36 different sites from San Diego to just south of Juneau, Alaska.

Eelgrass wasting disease spreads through a slime mold, named Labyrinthula zosterae, which darkens the grass with lesions, preventing photosynthesis and eventually killing off the plants. Highly infectious and quick acting, the disease took out 90 percent of eelgrass on the East Coast of North America and Europe in the 1930s.

The Pacific coast is now experiencing large losses, including California’s Morro Bay, which saw a 95 percent decline in eelgrass between 2007 and 2015. At each site, team biologists will assess ecological processes, pinpoint human impacts, and see how resident species are interacting to shape each community. The teams will look at the impact of small animals feeding on eelgrass or algae to find out whether these herbivores are cleaning the grass and helping it resist disease, or grazing on it and thereby weakening it. Researchers will also examine the role of microbes growing naturally on eelgrass blades.

“This project will connect from the molecule to the mapping level what’s going on in these sea grass systems,” Duffy said. “One of our partners is doing molecular microbiome work to understand how environmental conditions are changing the microbial community on sea grass. We go from there to understanding the community ecology, what animals are living there, the environment, the changing climate, and mapping the extent of the eelgrass beds with the drones.”

The group Citizen Science GIS began using drones to support coastal mapping for its Open Reef initiative. The effort, funded by a National Science Foundation Research Experiences for Undergraduates grant, captures high-resolution imagery for islands off the coast of Belize.

“We were invited by some local fishermen and tour guides to start drone mapping work, and it’s taken off from there,” said Timothy Hawthorne, founding director of Citizen Science GIS and associate professor at the University of Central Florida. “I think it’s the power of these really visual technologies being used with people that need them.”

Sharing a screen view that shows the imagery a drone has captured starts conversations with locals, guiding researchers to map the most vulnerable areas. They process drone imagery with Drone2Map for ArcGIS—an app that also allows access to imagery in a geographic information system (GIS) for visualization, mapping, and analysis.

“Our research has been very well received because we share our data openly,” Hawthorne said. “The imagery is beautiful—it’s crisp and high resolution—but I think the most important part is that it’s shared and free.”

Work in Belize continues with the Coastal Zone Management Authority and other aligned nongovernmental organizations (NGOs), including Marine Global Earth Observatory (MarineGEO), which has a field station in Belize.

Researchers are deploying drones to capture imagery for each site to see the extent of sea grass beds, gauge loss, and document scarring from boat propellers.

“We add the geospatial component,” said Timothy Hawthorne, founding director of Citizen Science GIS and associate professor at the University of Central Florida. “We’ll take GPS measurements to connect what the biology teams are doing under the water—in terms of the health of organisms—to the imagery we capture and points on the map.”

Imagery may also support artificial intelligence work for coprincipal investigators from Cornell University’s Institute for Computational Sustainability. Computer scientist Carla Gomes, who runs that team, developed an algorithm to spot the disease’s telltale lesions. In the field, scientists could use AI to identify the disease and draw links to environmental and biological forces.

The drone team will also train citizen scientists to capture and share their own drone imagery for designated research areas. Community partners and citizen scientists who are trained in the technology make for more persistent site monitoring, as the main drone mapping team can’t be everywhere.

“Everything in ecology scales with area, so one of the real challenges in ecology has been how to scale up intensive small-area studies to understand the impact on a regional or global scale,” Duffy said. “The drone work helps make that link.”

The team’s goal for its three-year study is to give coastal managers a better understanding of what’s happening and warnings about what’s likely to happen given changing conditions.

“The hope is, we come out of all of this fieldwork with a statistical model that can predict disease—testing and refining it in order to use it in a predictive way,” Duffy said.

Learn more about how GIS provides insight for a changing planet.