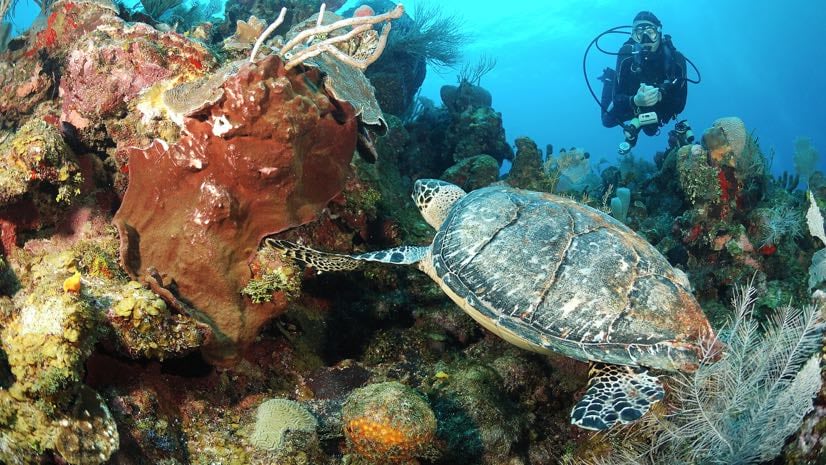 When Dustin Baumbach decided to pursue an advanced degree in biology, he never intended to help pioneer a new form of citizen science. He wasn’t even sure what animal he wanted focus on. “I just knew that I wanted to study some type of marine organism,” he recalled.

When Baumbach’s PhD adviser at Loma Linda University in California, Dr. Stephen Dunbar, suggested he travel to Honduras where another student was studying olive ridley sea turtles, Baumbach spent a summer assisting with the project focused on nesting turtles and hatchlings.

When he came back, he told Dunbar, “I think we could probably create some great projects from this. So, let’s go ahead and go bold with it.”

It was a decision that would lead to new technology applications that support not only sea turtles but citizen scientists.

Hawksbill sea turtles are widely distributed in tropical climates around the world. They are usually found near coral reefs, where they play an important role in biodiversity. As spongivores, sea turtles control the population of sponges, which compete with coral reefs for space to grow. If sponges overwhelm a reef, the entire reef ecosystem suffers.

The hawksbill is classified as critically endangered. In some parts of the Caribbean Sea, the hawksbill has nearly vanished. Baumbach chose to study hawksbills in a region where they are relatively plentiful. The main site for his project was the Sandy Bay West End Marine Reserve (SBWEMR), located along the northwestern shore of Roatán, Honduras. SBWEMR represents a juvenile population of hawksbills, the primary subjects of Baumbach’s PhD research.

Within SBWEMR, Baumbach wanted to determine the size of a juvenile hawksbill’s typical home range—the area in which it forages for most of its food. A related question pertained to the role competition plays in defining an individual turtle’s range.

To answer these questions, Baumbach would need a method of identifying individual turtles, and also a method of tracking the creatures. This is where he wanted to go bold.

Reaching Out to the Scuba Diving Community

The idea of tracking hawksbills is not new. Established practices involve catching the animal and attaching a tracking device. “Typically, researchers use radio, acoustic, or GPS telemetry to monitor sea turtle home ranges,” Baumbach explained. “But this method can be very expensive, and in the end the transmitter may be lost.”

Baumbach’s idea, which he and another grad student launched in 2014, was to forgo the transmitter and enlist  citizen scientists as collaborators. The marine reserve is popular with scuba divers. Perhaps, he thought, they could report hawksbill sightings, and over time, a map could be developed that would provide a complete picture.

“There’s a wide range of dive shops and numerous tourists who come to these shops, so it sets up the parameters for a great citizen science project,” he said.

Baumbach soon encountered problems with this approach, which required dive masters to fill out paper tallies of sightings. Some of the dive shops were less than enthusiastic about the project. They would either decline to participate, or mention it to their clientele without following up. The overall result was a limited amount of data—and what data they did get was not necessarily reliable.

There was also a thornier problem. Even if divers were conscientious and provided an accurate overall account, there would be no way to determine the number of sightings of the same turtle, which was required information to determine home ranges.

“So, the following year, I was discussing with my adviser a better way to collect these sea turtle sightings,” Baumbach said. He had recently completed a certificate course in geographic information system (GIS) technology—computer software that processes, stores, and displays spatial data on interactive maps.

Baumbach realized GIS would be a perfect way to organize the turtle sightings. But more than that, it would be a way to democratize the process. GIS could provide a cloud-based common map that many people could access. It would make the process easier and more exact. Unlike the previous method, which relied on dive shop owners as data brokers gathering and relaying their patrons’ turtle sightings, GIS could provide a direct conduit. If a diver spotted a turtle, they could access an app and record the sighting on a map.

In designing the project, Baumbach recognized that dive tourists do not always have access to a computer after their dives, which led him to leverage recent advancements in GIS. Mobile apps now make it easy to upload data from the field. Baumbach designed a mobile app called TURT (Turtles Uniting Researchers and Tourists). Divers log on to record where they saw a turtle, along with other information such as time of day and weather conditions. Tourists are also encouraged to photograph and upload pictures of any turtles they see. The map is accessible through the website for the Protective Turtle Ecology Center for Training, Outreach and Research, Inc. (ProTECTOR, Inc.).

Although Baumbach’s app is easy to use, it involves some of the latest capabilities in GIS technology. With recent developments in spatial data science, GIS can now include an artificial intelligence (AI) component, sometimes called GeoAI. ProTECTOR, Inc. also uses machine learning, a form of AI that can teach a computer to recognize and sort unlabeled data based on knowledge gleaned from studying large examples of labeled data.

For the turtle project, the program can learn to recognize individual turtles, just by studying the photos uploaded by divers. Machine learning programs can recognize subtleties the human eye might miss, such as unique sea turtle facial scale patterns. Even for an expert like Baumbach, it can be difficult to look at one diver’s turtle photo and connect it with another photo of the same animal, especially in a large database of photos.

Baumbach emphasizes that his project is not the first to enlist citizen scientists in gathering turtle data. What makes the ProTECTOR, Inc. model unique is the agency it grants to divers.

“Other citizen science projects within the sea turtle community allow dive tourists to log their own data, but ours is the only one to provide active participation to tourists to both log information and map their turtle sightings,” he said.

“What we told them was that we have dive sites plotted throughout the marine reserve,” Baumbach said. “So as long as the divers know what dive site they went to and the general location where they saw the turtle, the biggest error that a sighting would have is approximately 88 meters.”

Baumbach’s GIS-based model also ensures that the project can be ongoing. As the dataset grows, so, too, does an understanding of the animals. By now, the ProTECTOR, Inc. map includes 311 sightings.

Using these multiple sightings and GIS tools, Baumbach can sketch out and overlay the animals’ home ranges. With the help of dive tourist photos, he was able to identify four individual hawksbills with 10 or more sightings, then sketch their home ranges using tools within a GIS. As he and other scientists suspected, these areas are usually less than one square kilometer.

The data also revealed large overlaps of home ranges. This was good news, as it suggested that the food supply within the reserve is plentiful enough to support a relatively large population of hawksbills.

For the sake of sea turtles everywhere, Baumbach hopes his GIS-based approach becomes universal. “This method can be applied worldwide for any species of sea turtle,” he said. “Even conservation organizations without a lot of funding can monitor the movement of turtles.”

While few spots on Earth are untouched by humans, projects like this turn the ubiquity into a positive. By using technology to bear witness with citizen science, people can gain a better understanding and respect for the natural world.

Learn about the many uses of GIS for issues of conservation. Two recent podcasts explore the use of GIS to track and monitor wildlife in the African Parks network, and to drive NatureServe’s large-scale conservation efforts.