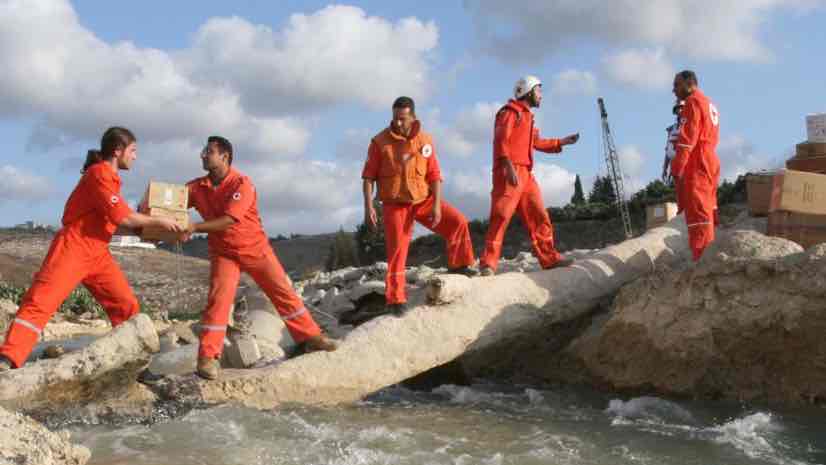 In mid-2017, the Lebanese army conducted an exchange with Syria to remove the Islamic State and Al Qaeda-affiliated militants who were secluded in the mountains inside Lebanon’s northeastern border with Syria. Lebanese Red Cross (LRC) staff used satellite imagery and a geographic information system (GIS) to plan points of recovery—places where wounded fighters could be safely loaded into ambulances—and to identify escape routes should the delicate removal of this foreign force cause renewed fighting.

“I was responsible for GIS, and it was absolutely critical to make my maps right, because any mistake could create conflict,” said Chahine Hamze, ICT Manager at the LRC. “It was terrifying.”

LRC volunteers transferred wounded fighters to Syrian Red Crescent ambulances across the border and headed back for more. The organization helped ensure the safety of ambulance drivers by connecting GIS to GPS satellite receivers in each ambulance so they could precisely monitor the progress of each ambulance and the overall operation. The transport of nearly 8,000 armed fighters took three trips in a convoy of 120 buses and 40 ambulances, and the maps lent clarity to a complicated mission.

LRC workers have experience with critical mapping. They also use GIS maps to keep track of minefields and unexploded ordinance in the country.

“We use GIS to map the exact area of mines to empower the community to know where and how to get around it,” said Hamze. “The coordinates must be exact.”

With its mission to promote peace and alleviate human pain without discrimination to nationality, political affiliation or social class, LRC has become a societal glue in an unstable region.

LRC provides the only national ambulance and first aid service in the country. It also works to connect different factions, focusing on social cohesion and integration, with a paid staff of less than 400 people and 12,000 volunteers.

“After the 33-day war in 2006, LRC decided to set a clear vision to improve our capacity and maintain our abilities,” said Kassem Chaalan, disaster risk reduction program manager at LRC. “Yes, we are financially poor, but we are rich regarding our experience, knowledge, and motivation.”

“Kassem and I started when we were 17 years old and we have spent 18 years in service,” said Hamze. “We understand the mentality of the Lebanese people and we work for a cause.”

The people of Lebanon endure ongoing conflict. A long civil war began in 1975 and lasted until 1990. The war broke the country into sectarian cantons. In 2011, the neighboring war in Syria spilled into Lebanon and caused the worst instability since the civil war.

“When you live in a country with a lot of crises it requires fast decisions, and you learn faster than other countries that don’t experience this,” Hamze said. “In my life, I’ve passed through four wars.”

Through wars and conflicts, LRC workers maintain a peaceful presence, administering aid to people in need.

“It’s like a family,” said Ibrahim Ali Ahmad, GIS specialist. “The LRC has the trust of the people.”

Helping the Vulnerable Help Themselves

“We saw the need to be close to the most vulnerable people,” Hamze said.

The number of Syrian refugees in Lebanon recently passed 1.5 million, adding to 500,000 Palestinian refugees. This means there are an overwhelming number of vulnerable people in the country, with five million Lebanese and two million refugees.

To meet the growing demand for service, LRC has opened several blood transfusion centers, with plans for 13 locations. It uses GIS to gauge the need for blood and to record the location of donors.

“We can see blood donors on the map, based on blood type,” Chahine said. “If we have a shortage of A-plus blood type, we know where to do a blood drive.”

Rather than a top-down approach, the Lebanese Red Cross works to build capacity in each community.

“We continue empowering communities by creating local emergency response teams,” Chaalan said. “We are working to link them to our dispatch center and emergency hotline, to improve response times and send the closest team to each call.”

In addition to Lebanon’s longstanding human conflicts, the country faces risk from its geographic positioning along a fault line which makes it prone to earthquakes, tsunamis, and landslides.

To gain a better sense of disaster preparedness, LRC staff set out to conduct hazard, vulnerability, and capacity assessments in each community around the country. However, the volume of data they needed to collect became overwhelming.

“We knew GIS would be helpful, but we didn’t know how to deal with this project until we started collecting data with Survey 123 for ArcGIS,” Chaalan said.

The use of this simple survey tool on handheld devices in the field helped to streamline data collection, however, managing the program continued to pose challenges.

“When I consulted with the IT team, I said ‘My life is very difficult as a manager, because this program is huge,” Chaalan said. “That’s when they came up with a dashboard solution to manage our activity on a daily basis. At the press of a few buttons, they made my life easier.”

With the Operations Dashboard for ArcGIS, managers at LRC can view what the volunteers are doing, the number and type of activities, and details about each project. This creates an ability to monitor progress, deadlines and objectives.

“We use GIS as a project management tool and connect to other services, like Microsoft Power BI, to analyze activities,” Hamze said.

A community will not be resilient unless it is risk informed and aware. We use GIS to link the community to information and resources.

The Lebanese Red Cross has become a sophisticated user of Esri’s Survey123 for ArcGIS to capture data from the field. For its community assessment effort, LRC workers combined 50 different surveys, with more than 1,200 survey choices, to assess disaster preparedness.

The surveys help to build a full picture of communities across Lebanon. The data combines to provide that picture, and with flexibility to use the same data in a variety of existing systems.

In a chaotic environment with volunteers coming and going, the ease of use the survey provides means volunteers can be handed a tool and can deploy it without much training.

Educating and Enabling the Young

As part of its outreach to young people, LRC workers are pioneering emergency preparedness in 200 schools across the country, giving students skills and knowledge to face the next challenge.

“A community will not be resilient unless it is risk informed and aware,” Chaalan said. “We use GIS to link the community to information and resources.”

In the Lebanese city of Tripoli, for example, schools facilitate joint activities with conflicting groups to not only improve preparedness and safety but also to reduce tension.

LRC staff and volunteers have been able to build trust across the country because, throughout all of the wars and conflicts, they were always there to help. The organization has matured to become an advisor to the government, delivering strategy and improved resilience.

“We have prepared the ground, and the community structures, and have shown over four or five years that we can make a change in Lebanon,” Chaalan said. “We are not speaking about something delivered by another country, we have taken ownership, mastered it, and have made this change.”