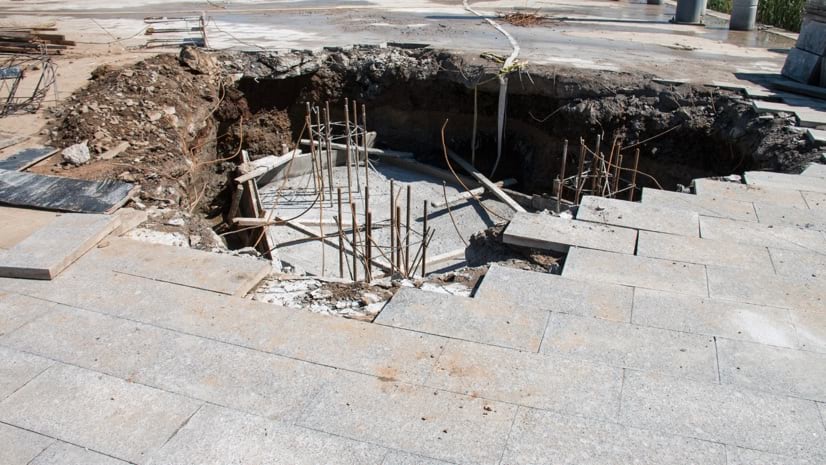 The National Corvette Museum in Bowling Green, Kentucky, holds many of the standard features a visitor might expect—guided tours, a racing simulator, a café, a gift shop, and of course, Corvettes, ranging from mint-condition classics to experimental prototypes. Unlike other car museums, however, the Bowling Green facility boasts one completely unique feature: a geology exhibit with a 360-degree interactive virtual tour of the massive sinkhole cavern that yawns directly beneath the viewer’s feet.

Early one February morning in 2014, the crater opened unexpectedly in the museum’s Skydome, where a number of irreplaceable Corvettes were on display. Security footage shows the apparently solid showroom floor abruptly trembling for a few moments before dropping several inches, then completely collapsing into a 30-foot-deep chasm, taking eight Corvettes with it.

Kentucky is one of many spots throughout the world to feature karst terrain, a landscape of softening bedrock. Karst conditions exist when the geological substrate of a region is composed of any kind of soluble rock, such as limestone. Beneath the surface landscape of ordinary fields and forests, natural underground watercourses and drainage systems are at work, dissolving the soluble rock and excavating hidden caverns. Meanwhile, unaware of the dangers, people often build homes and towns atop this volatile foundation. When the supporting surface becomes too weak to hold structures, disaster strikes with costly and sometimes tragic consequences.

Scientists tasked with safeguarding people from sinkholes and other natural hazards are exploring new and better ways to find areas with karst geology before it’s too late.

A Better View from Above

Traditionally, sinkholes and other karst features were discovered by field observation, in which geologists would physically examine the area in question and create a paper map.

For example, staff at the Ohio Department of Natural Resources combined existing reconnaissance maps with lidar-identified depressions in the landscape to locate potential sinkages across the state. Other states are also exploring the use of lidar-enhanced mapping and GIS to find karst formations and anticipate sinkholes.

Staff at the Kentucky Geological Survey (KGS) use lidar to identify thousands of previously undiscovered sinkholes and karst areas across the state. They add the resultant data to the KGS online map server and use it to analyze the distribution and contributing factors. This highly accurate map can help developers avoid building in high-threat areas or address collapse potential before construction begins.

The Unseen Causes of Sinkholes

Sinkhole disasters seem to be making headlines more frequently. Scientists attribute increasing sinkhole occurrences to impacts on underground water tables. Karst areas experiencing drought expose subterranean caverns that were previously full of water. In such places, the water provided enough pressure to hold up the thin layer of bedrock. With the water gone, the layers of earth supporting fields, structures, and roads collapse. Overpumping of groundwater can have the same effect. Whatever the cause, when underground water levels fall, there’s a rise in the number of sinkholes.

Sinkhole impacts can be relatively benign in rural areas, but with growing development they endanger communities. New building and expansion can disrupt the fragile balance of underlying porous bedrock. Pavement and cultivated fields alter natural drainage systems, sending water runoff through drains and ditches and eventually underground where it can cut more and deeper channels into the porous rock. Vibrations from construction-related drilling, increased traffic, or broken underground pipes can also trigger cave-ins. The result is a sudden sinkhole that sometimes damages or swallows chunks of road, whole cars, and even homes.

Impact on Communities and Environment

Anywhere bedrock has been compromised by either natural karst conditions or human-made bedrock erosion, sinkholes can strike with varying effects. Some caverns become only a local curiosity, as was the case last year in Dana Point, California, when a void opened up relatively harmlessly beneath a small scenic waterfall. However, when a sinkhole opens up in the middle of a busy street, the threat to lives is more immediate. Between the beginning of December 2019 and the end of January 2020 alone, sinkages blocked roadways in Alaska, California, Pennsylvania, and Virginia, creating additional work for local police and repair crews and diverting traffic for thousands of people.

Sinkages can also suck contaminants into the drinking water supply. Such was the case in Florida when a 45-foot-wide sinkhole opened in 2016, depositing 215 million gallons of polluted, slightly radioactive water into a large underground aquifer. Cleanup efforts took two years and cost millions of dollars.

It’s common for residents to use sinkholes as a convenient location to dispose of things that should be taken to the dump, such as rubbish heaps, animal carcasses, and bulky items—even cars.

Using sinkages this way creates a serious threat to public health. Any foreign contaminants, including fertilizers, pesticides, toxic chemicals from cast-off cars, and E. coli from discarded animal remains, have a virtually unfiltered route to local wells and water supplies. In the US alone, aquifers in karst areas provide about 40 percent of the groundwater used for drinking water.

In response to this health and safety risk, land managers use GIS maps and mobile apps in the field to identify and inspect such sites, then work with property owners to remove contaminants.

Sinkages are becoming increasingly common even in nonkarst areas as a result of weakness and leaks in aging water mains, drain pipes, and sewer lines. Guatemala City has seen several colossal sinkholes open up in recent years as a result of ruptured sewer lines. The most famous occurred in 2007, when several homes were destroyed, and in 2010, when an entire factory disappeared into a massive chasm.

On Christmas Eve 2016, a compromised sewer line caused a football field-sized cavern that abruptly devoured several Detroit homes and a large swath of road. In January 2017, a sinkhole opened beneath a 55,000-pound excavation truck in Georgia, almost entirely consuming it. The collapse was caused by the underground cave-in of an old storm drain. Another collapse occurred on a San Antonio road in December 2016 as a result of a ruptured sewer pipe, swallowing two cars.

A Better View from Below

Water companies like White House Utility District in Tennessee are using GIS and mobile apps to track leaks and breaks as they happen. This information is mapped to give utility operators solid evidence they can analyze when anticipating where the next leak might occur. Operators study GIS maps of all related data to understand patterns in causes of pipe failures, such as pipe material, size, area, age, and surrounding soil. They can then target other similar assets and prioritize rehabilitation before the next leak happens. In this way, GIS apps and maps help prevent costly and dangerous collapses.

Just 50 miles from the White House Utility District service area, guests at the Corvette Museum explore the reality and aftermath of the massive sinkhole, reading descriptions of the event and its causes. Five of the eight Corvettes swallowed by the crater are on display, unrestored so viewers can examine the damage caused by the cave-in. Off to one side, visitors can peer into a small manhole in the floor. When repairs were completed, a vertical passage was left open, giving a glimpse of the hidden and sometimes volatile world below.

Learn how utilities use GIS to manage aging water infrastructure. 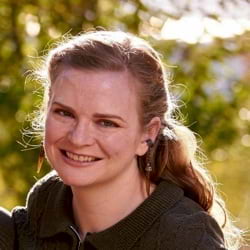 Jeanne is a marketing content writer at Esri, where she enjoys the opportunity to use storytelling to explore the ways people use GIS technology to change the world and shape the future. She is interested in history, obstacle course races, and trying new things.