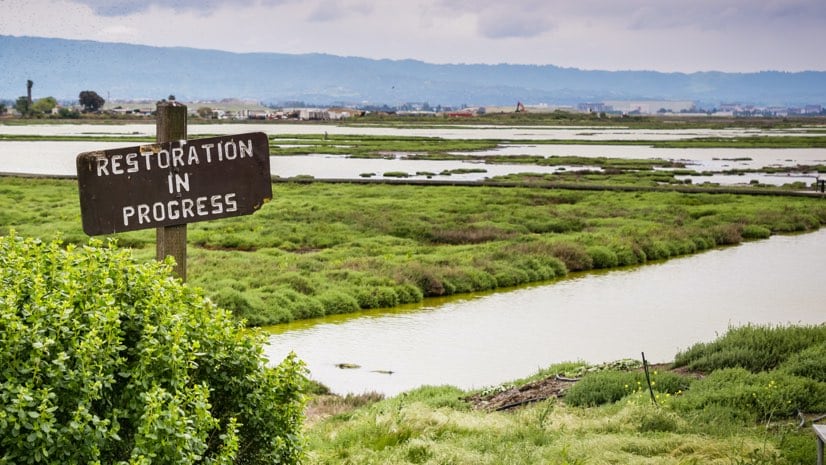 The San Francisco Estuary Institute has deployed GIS for much of its 40-year history to build a knowledge base about natural processes and nature-based solutions to create a resilient shoreline.

The San Francisco Bay Trail provides more than 350 miles of walking and cycling path through the 47 cities and nine counties that ring the San Francisco Bay, and acts as a popular viewing platform for tide cycles and abundant wildlife. Because it sits at the wetland-urban interface, the trail is extremely vulnerable to sea-level rise.

“In the San Francisco Bay, we have a long history of wetlands and ecosystem restoration for habitat conservation,” said Julie Beagle, former senior scientist in the Resilient Landscapes Program at the San Francisco Estuary Institute (SFEI).

To understand the Bay Trail’s vulnerability and determine ways to mitigate flood damage, planners with the East Bay Regional Park District are using SFEI’s San Francisco Bay Shoreline Adaptation Atlas, created by Beagle and her colleagues. The atlas serves as a science-based framework for developing adaptation strategies specific to the area’s diverse shoreline and that take advantage of natural processes.

“We started to get calls from regulatory agencies dealing with proposals for horizontal levees and beaches—all kinds of new living shoreline ideas,” Beagle said. “The regulatory environment, which protects the bay, has historically prohibited the use of sediment to fill in the bay, and there was no science or regulatory guidance on how to soften the shoreline to deal with sea-level rise.”

The standard method has been to harden the shoreline using riprap and concrete seawalls. Beagle and her team at SFEI set out to share methods and introduce green infrastructure into the region’s shoreline management practices.

For much of its 40-year history, SFEI has used a geographic information system (GIS) to compile information about the estuary’s chemical, physical, and biological health. GIS also guides SFEI’s mitigation strategies and actions.

Wetland loss continues to be a priority for the San Francisco Bay because an estimated 80 percent of marshes and mudflats no longer exist, according to the California Natural Resources Agency. This loss eliminated wildlife habitat and storm-buffering capacity, which will be vital as storm intensity increases and seas rise. In 2016, voters in the nine Bay Area counties approved a bond measure to provide $500 million over 20 years for wetland restoration. In some areas of the bay, restoration will suffice, but others will require hard infrastructure such as armoring the shoreline and raising levees.

“There are a lot of big questions, and we used GIS to look at the historical knowledge about the bay to determine what makes sense geomorphically,” Beagle said. “After Hurricane Sandy, there were a lot of images of marshes being built at the bottom of Manhattan when we know there’s really deep water there with high wave energy—that’s not going to work, and it won’t last. We spent five years on the atlas to show the best types of projects for the physical conditions in each place.”

Beagle also hopes that use of the Adaptation Atlas will help instill a regional approach spanning all shoreline jurisdictions including cities, counties, wastewater treatment plants, highways, and private landowners.

“It’s about collaborative planning and collaborative science for resilience,” Beagle said. “If each entity is just going to plan for its own piece of shoreline, it’s not going to be effective, it won’t be resilient, and it doesn’t have any ecological benefit. The poorest communities get left behind, and the richest communities pay to build themselves out of sea-level rise. That’s what we see happening right now.”

In addition to the equity issues Beagle raises, there is also the simple fact that nature does not operate according to jurisdictional boundaries or the built environment.

“The idea is to capture the processes of watersheds, creeks, and the shoreline to plan holistically,” Beagle said. “Another way to think about it is nature’s jurisdictions.”

A growing number of governments have pledged to conserve 30 percent of land and coastal waters by 2030 to address ecosystem degradation and mass extinction.

GIS is a core technology in this evidence-based plan, which includes the formation of the California Biodiversity Collaborative and an upcoming Natural and Working Lands Climate Smart Strategy to guide climate action in California.

This effort will also create a geographic information system called CA Nature to integrate data, build a shared understanding of the natural world, establish a baseline to gauge 30×30 progress, and identify conservation opportunities. Plans will honor the sovereignty of tribal nations and aim to ensure equitable distribution of nature’s benefits to communities of color and low-income communities.

SFEI collects many layers of information about the bay, estuary, and watersheds, and it acts as a state spatial data center. All bay restoration projects are entered into SFEI’s EcoAtlas to be tracked over time by regulatory agencies monitoring compliance. SFEI purchases aerial and lidar imagery to monitor change and accurately measure elevations. For more thorough or immediate imagery analysis, the institute deploys drones to key areas of interest.

“With the drone, we’re able to survey right after a storm or return at the right time of year to see what’s changing,” said Pete Kauhanen, GIS manager and drone expert at SFEI.

Many of the drone missions fulfill multiple objectives.

“Flying over the Corte Madera Marsh allows us to see patterns of erosion or progradation of the marsh edge, and at the same time we can see the state of trash in the marsh,” said Tony Hale, program director of the Environmental Informatics Program at SFEI. “We’re able to look at both the built environment and the natural environment and will continue to look back at the record to what has changed.”

SFEI’s drone team also assisted with the institute’s Resilient Landscapes Program in quantifying the impact of winter storms. High-resolution drone imagery and tools that automatically calculate volume provided an accurate measure of sediment and its movement. The Resilient Landscapes team analyzed the imagery to identify erosion and the surge channels that have eaten away the marsh. The work also captured an area with a degrading levee that caused the beneficial expansion of a mudflat.

By using imagery to observe and analyze natural processes, SFEI teams can guide strategy and measure the performance of different management practices.

“Imagery also helps us gauge the amount of sediment that we need to supply the marshes so they can keep up with climate change,” Hale said.

The Bay Area is home to a broad diversity of people, topography, tidal patterns, and microclimates. Strategies that work in one city for one stretch of shoreline may not work in a neighboring city. The Adaptation Atlas took the approach of cataloging and describing the 30 distinct operational land units of San Francisco Bay’s 400-mile shoreline.

“We look at what makes sense for the land use that’s existing and for what could be there in the future,” Beagle said. “The Adaptation Atlas gives us a framework within which we can work using operational landscape units that are based on our understanding of the underlying geology and geomorphology.”

Modeling the processes at play helps SFEI tackle the bigger question of how to improve climate resilience while maintaining functional ecological and hydrologic systems.

“By using big spatial metrics, we work to understand how high and wide certain features need to be to knock down waves in each location,” Beagle said. That knowledge is then modeled against sea-level rise projections to devise adaptation strategies.

From Cleaner to Climate Ready

From the 1850s to the 1960s, the San Francisco Bay was often filled in to create land for housing and infrastructure. A lot of homes sit on land that’s built from artificial fill, which poses its own problems in this earthquake-prone area. Wreckage from the catastrophic 1906 earthquake was simply dumped into the bay and surrounding marshland. Some homes even sit on former garbage dumps as there have been many open landfills surrounding the bay.

“They used to talk about how bad the bay smelled,” Beagle said. “Then with the environmental movement and changes in laws, you could no longer fill the bay, and we began cleaning it up.”

While nobody can yet claim that the bay is clean, years of remediation have improved water quality and restored vital habitat.

“Now, it’s less about fixing the problems of the past and more about how we prepare ourselves for the future,” Beagle said. “We don’t want to wind up with seawalls everywhere. It’s about how to have a shoreline that’s still ecologically functioning, accessible to people, and equitable.”

Read more about how building green infrastructure provides a framework for sustainable growth.

A Journey Upstream and Down

The interview with Julie Beagle, senior scientist at the San Francisco Estuary Institute took place on her last day at the organization. It was good timing to reflect on the knowledge she had gained and how increased understanding led her to tackle a broader mission.

“I was a field scientist for years, where I would focus on minuscule details like the bank stratigraphy, the size of rocks, the channel, and fish habitat,” Beagle said. “Whenever there was a storm, I would get up in the middle of the night and go out and monitor how much sediment was mobilized and coming down the channels as the creek rose and fell. I moved my way downstream to the bay and then turned around and looked upstream at the processes that influence what happens down here.”

Beagle’s work evolved to take on a holistic focus with an eye on ecosystem services and natural processes. Now, climate change has become a dominant theme. She recently started a new job with the US Army Corps of Engineers.

“I’ve been asked to lead a team that does environmental planning for projects along the shoreline,” Beagle said. “I feel like I’ve been advocating from the outside, showing what could be done to be more resilient. Now I’m hoping to have a larger impact on how and where we build the infrastructure we need to protect and adapt our regions to climate change.”

One strategy high on Beagle’s list is managed retreat, with buyouts and changes in zoning for areas that will soon be constantly underwater.

“I actually wake up at night thinking about what to do with all the people in the whole country that will need to move,” Beagle said. “How are we going to make sure that we don’t tank the economics of communities that live below sea level?”