The communications team for the City of Arlington, Texas, aimed high with its goal for a new local government website: they envisioned a modern online destination for citizens that was engaging and informative and provided an unparalleled level of transparency into the status of municipal performance. It would be an ambitious undertaking, but would have the potential to transform government-community relations and set a precedent that many other municipalities (large and small) could follow. Armed with internal spreadsheets of departmental metrics and a checklist of features for the city's new website, the team began to explore how it could tackle this ambitious initiative.

Result
The Your City at Work destination has improved transparency, enhanced public participation, and established the city as a leader in communication for others to follow.

Around the same time that Warren and Konzel began strategizing, Esri was gearing up to release its newest batch of solutions, including many options designed to meet common challenges for local government.

Esri local government solutions are preconfigured maps and apps designed with simple, cost-effective deployment in mind. They include specialized tools to support workflows across a wide range of government departments—everything from mapping work orders for storm debris cleanup to fast, accurate election results reporting for the public. The new release included the Performance Management solution, a configuration of ArcGIS Dashboards designed to display organizational KPIs. 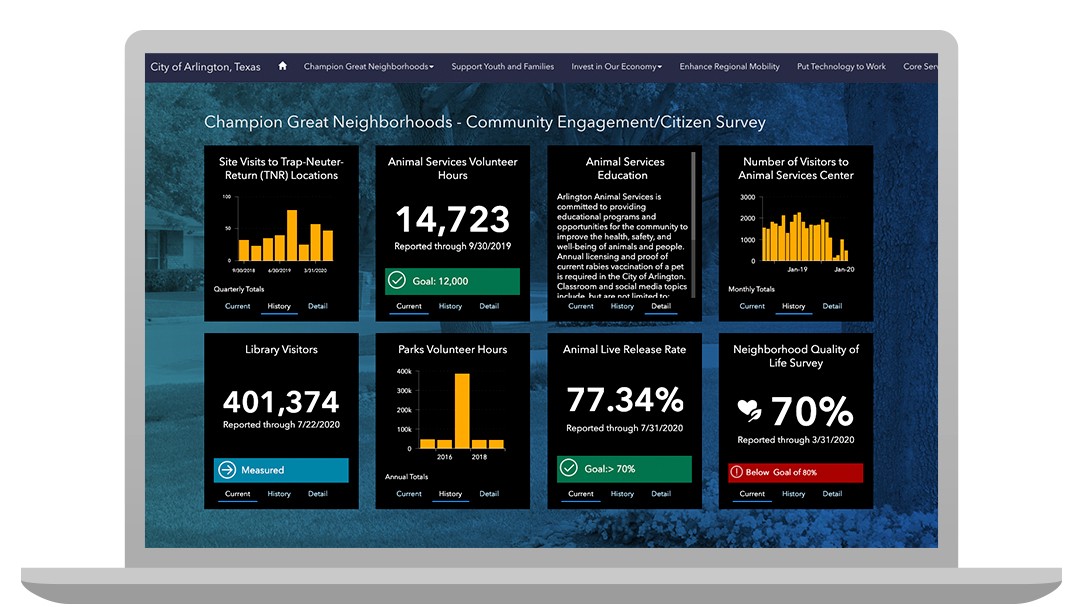 "[Civic participation] is a good thing. Even if it's critical, it gives you the opportunity to course correct. I think that acknowledging that we're not always perfect and we can improve is a good thing," says Warren. By creating an informational resource and initiating a dialogue with the community, the City of Arlington will be able to remain a leader and role model for other local governments – large or small. For more information about Esri local government solutions, please complete the form below and a representative will be in touch.