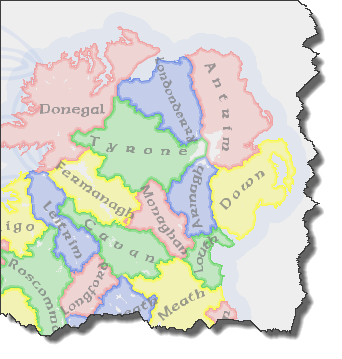 When creating a web map using ArcGIS.com Map Viewer, the basic approach involves adding operational overlays to a basemap.  As you add layers, they are set by default to be visible at all zoom scales. This often leads to problems at smaller scales as symbols overlap which can very easily render your map illegible and meaningless. By contrast, when you create a static map at a single scale you would consider the available map space and so design and position symbols to avoid these problems. It is useful to keep this principle in mind when designing web maps in a multi-scale environment since not all layers should necessarily be visible at all scales.  This blog entry shows you how you can use the visibility range settings in ArcGIS.com Map Viewer so that operational overlays are only visible at certain scales.  By taking a thoughtful approach to designing the content for your layers and setting their visibility range you can optimize the viewing experience for your map reader rather than bombard them with a mashup of tangled symbols.

Originally designed as a large format printed map (size A0), the map contains over 2500 label symbols identifying the location of surnames from the 1890 Irish census. Each surname label symbol is proportional to the number of births with that surname in that county during the census year. The map was designed at a scale of 1:485,000 and the minimum and maximum sizes of the surname label symbols set so that they could be positioned to be legible, visible and to avoid overlaps.

Creating a web map version presents some design challenges because of the multi-scale environment. Adding a layer of surname label symbols designed at the same scale as the print map would simply make them illegible and meaningless at smaller scales (figure 2) so a different approach is needed. 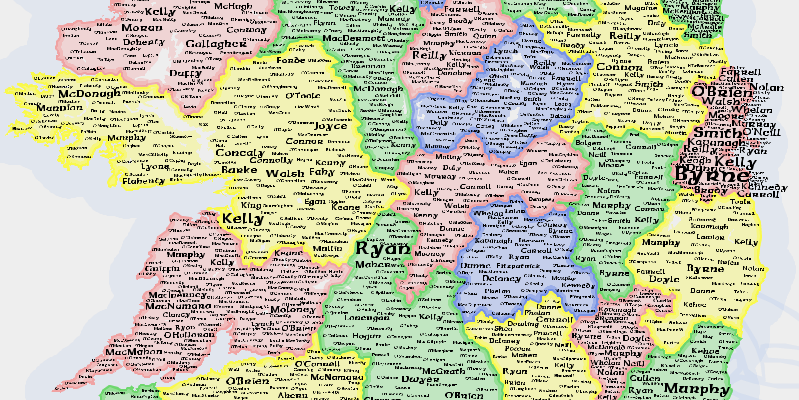 The surname label symbols for the web map version were created using the techniques described in the previous Mapping Center blog entries Adding labels to ArcGIS Online web mapsPart1 and Part 2. In summary, the process involves using the Feature Outline Masks tool in ArcMap to convert annotation to a polygon feature class which is then exported as a shapefile and added to your web map.

Instead of adding all surname label symbols at once, the approach for the web map will be to add them in a logical manner according to their relative importance.  As you zoom in to the map, larger labels that signify larger birth counts (those which are more important in quantitative terms) will appear first and as the map reader zooms in to larger scales, further surname labels are added according to their diminishing relative importance. This will have the effect of showing larger labels at smaller scales and as the map reader zooms in, the smaller labels are added.  Each label will be visible and legible at an appropriate scale for reading and you will avoid having small labels at small scales that cannot be read or understood.

To prepare the data in ArcMap, three subsets of the surname label symbols from the original map are selected and exported as shapefiles.  The first subset contains labels that have birth counts of over 50, the second contains labels that have birth counts between 2 – 50.  The final subset contains labels which have only a single count.  The three shapefiles each represent a specific subset of the surname labels so you are using separate layers to build a classified hierarchy of symbols into the design of your web map.

Once you have added your shapefiles to your web map and symbolized them you can begin to modify visibility range settings.

Zoom to a scale that is appropriate for the display of the surname label layer representing the largest symbols (the subset representing values >50). While at that scale, click the arrow to the right of the layer name and select Set Visibility Range from the menu.  In figure 3, the map scale is 1:2,311,162 which is appropriate for the surname label layer containing the largest symbols. Click Use Current to set the minimum scale.  To set the maximum scale, use the dropdown to pick the largest scale you want your layer to be visible at.  For this map, the largest zoom scale of 1:1,250 was chosen since the labels are to remain visible at all scales above the minimum threshold. 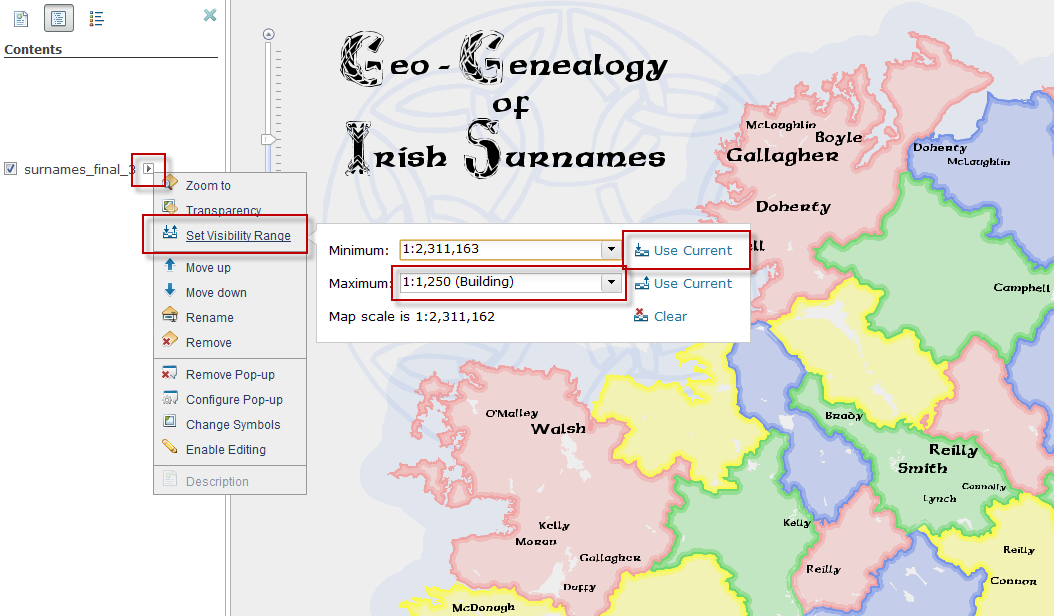 Next, zoom in to the next largest scale and then repeat the process to set the visibility range for your next layer of data.  Figure 4 shows the minimum scale of the second surname label symbol layer (the subset of values 2 – 50) set to 1:1,155,581. Again, the maximum scale is set to 1:1,250. 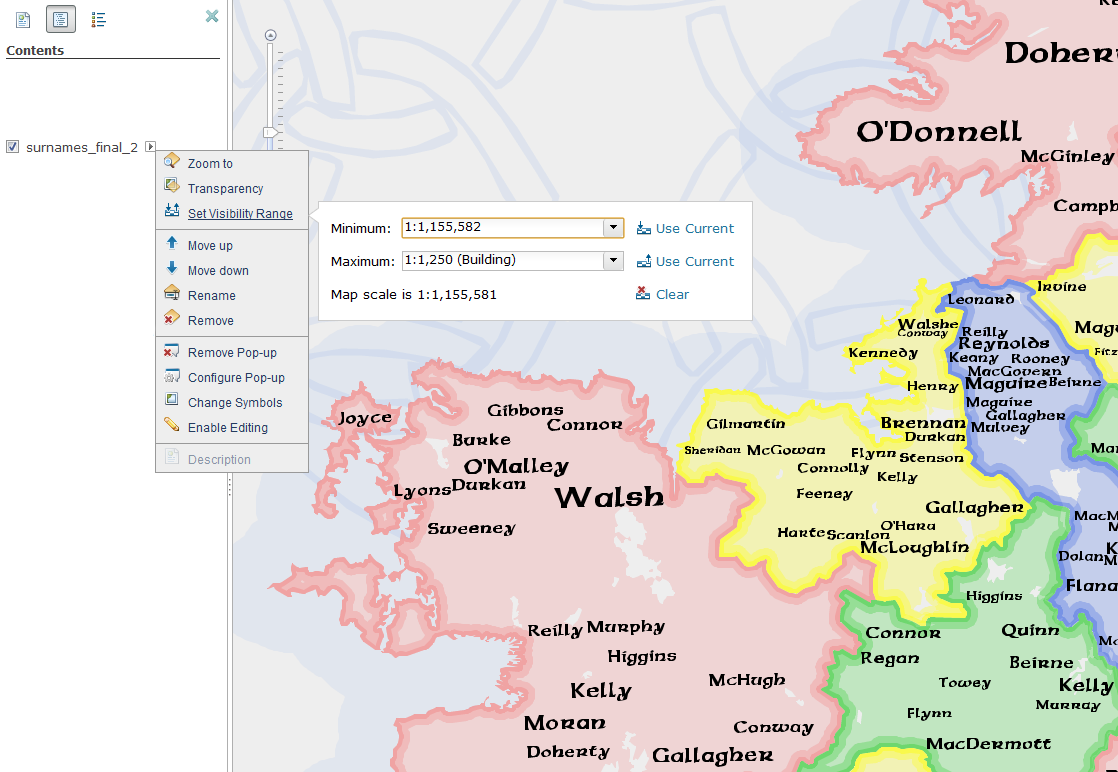 This process is repeated for the final surname label symbol layer (the subset of single counts) so its minimum scale is 1:577,791 and maximum scale is 1:1,250 (figure 5). 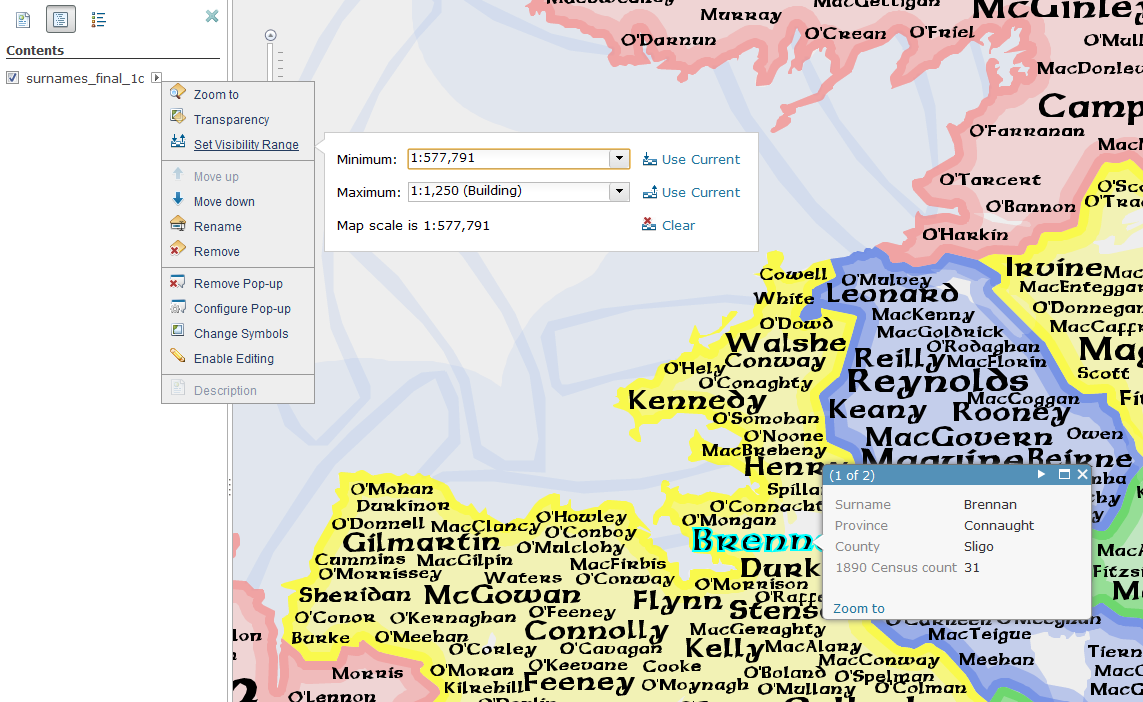 By setting the visibility ranges for the three surname label symbol layers in this way you take advantage of the multi-scale characteristics of the web map to display different subsets of the data at certain scales which helps reveal patterns and characteristics at those scales.  Graphically, you also avoid displaying all symbols at all scales and the map remains legible and meaningful at each scale.  Figure 5 also illustrates the use of a pop-up on the surname labels so that map readers can access the precise data count and geographical information should they need to. This provides an added benefit over the printed map where map readers could only approximate the census count by referencing the legend.

One further layer of labels representing the geographical county names has been added to the web map.  Figure 6 illustrates the minimum visibility range scale being set to 1:9,244,649 and a maximum visibility range scale being set to 1:4,622,323 for the county labels layer. A pop-up is used to allow the map reader to reveal the county and province names at all scales regardless of whether the county labels are visible. 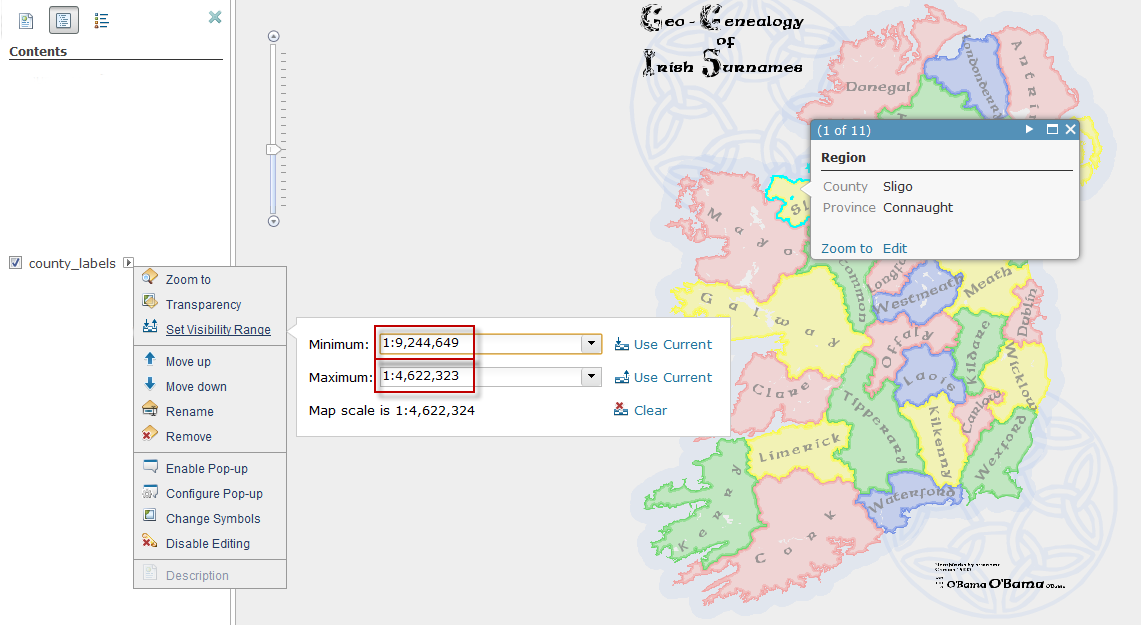 Figure 6. Setting the Visibility Range of the county label layer.

Figure 7. Setting the layer visibility range of county labels to avoid (a) overprinting of map detail so that (b) surnames are not compromised. 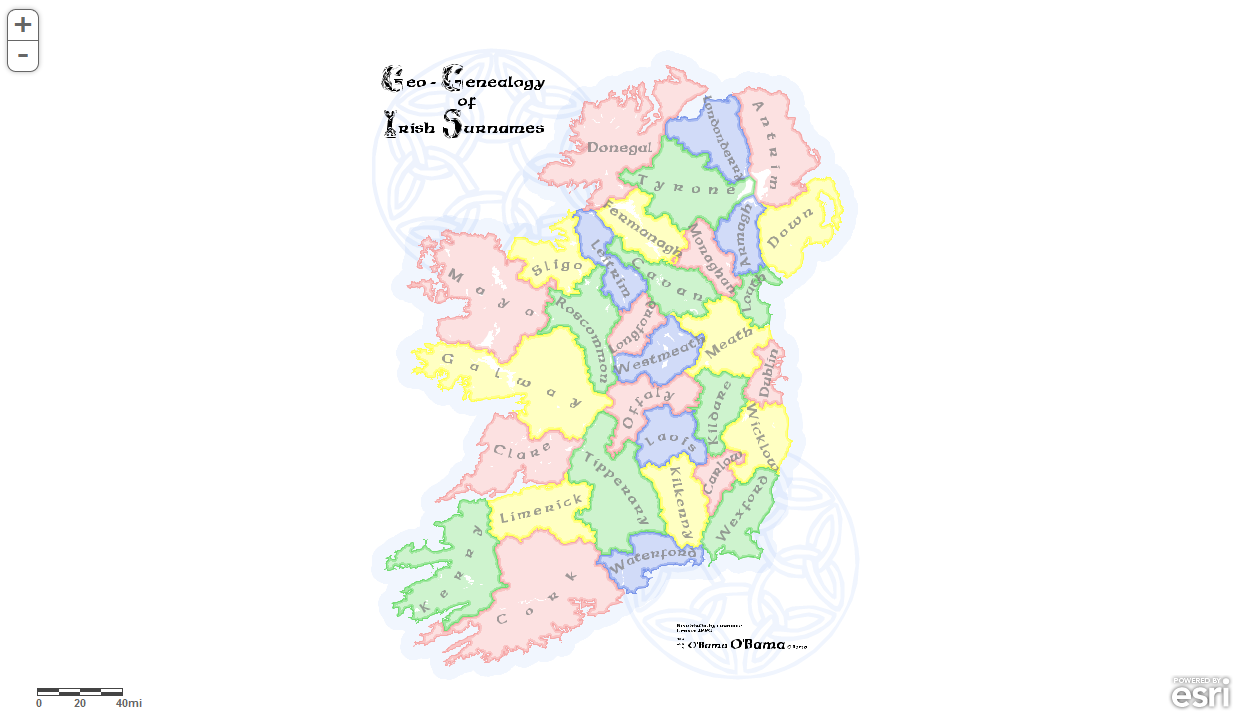 Figure 8a. Administrative boundaries and county names displayed at 1:4,622,323. 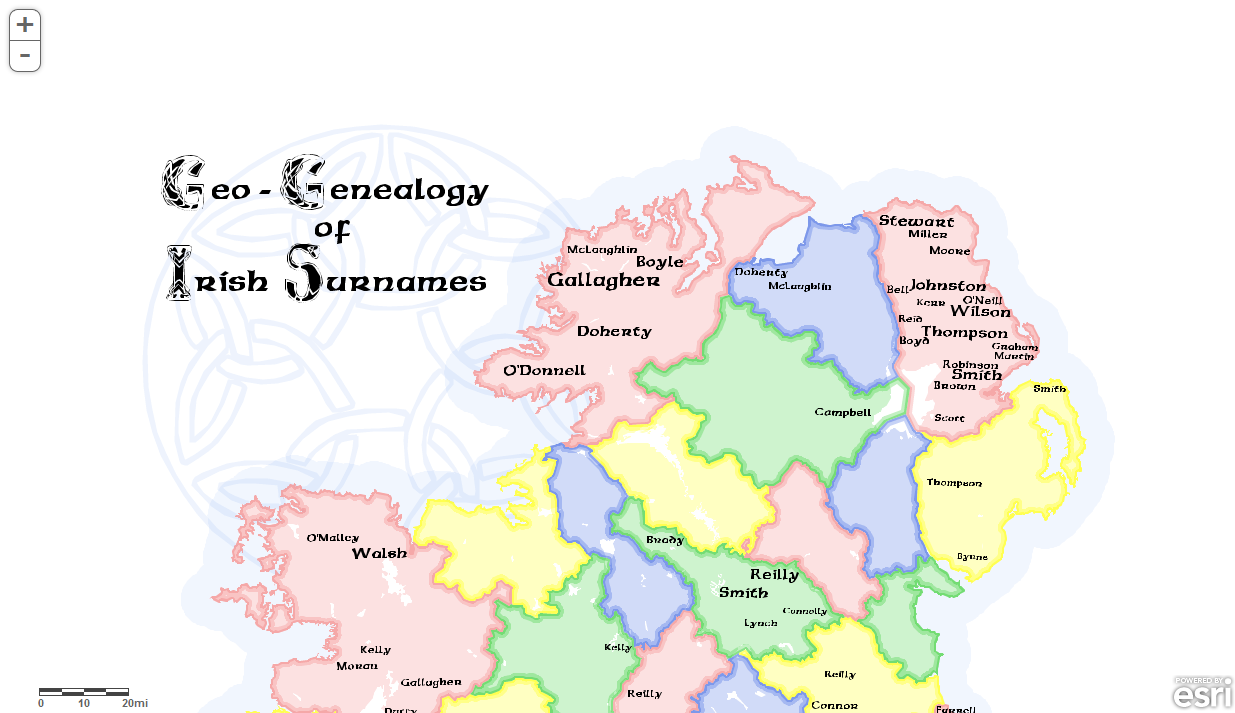 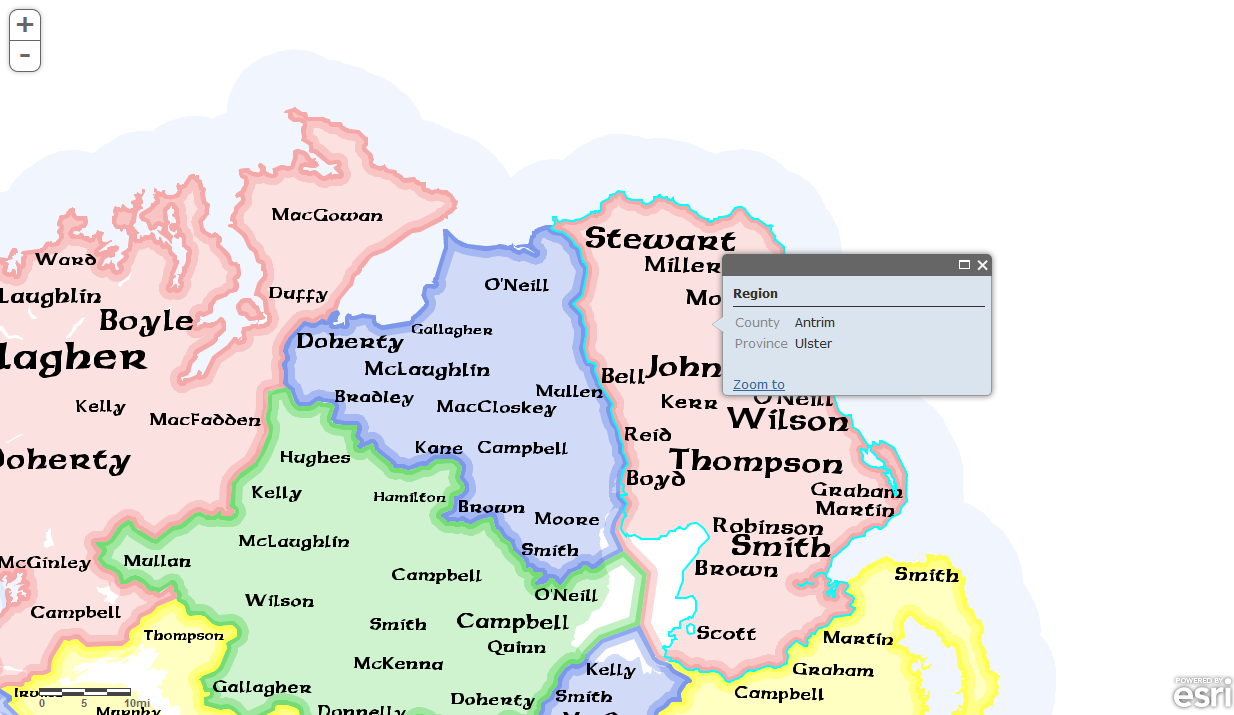 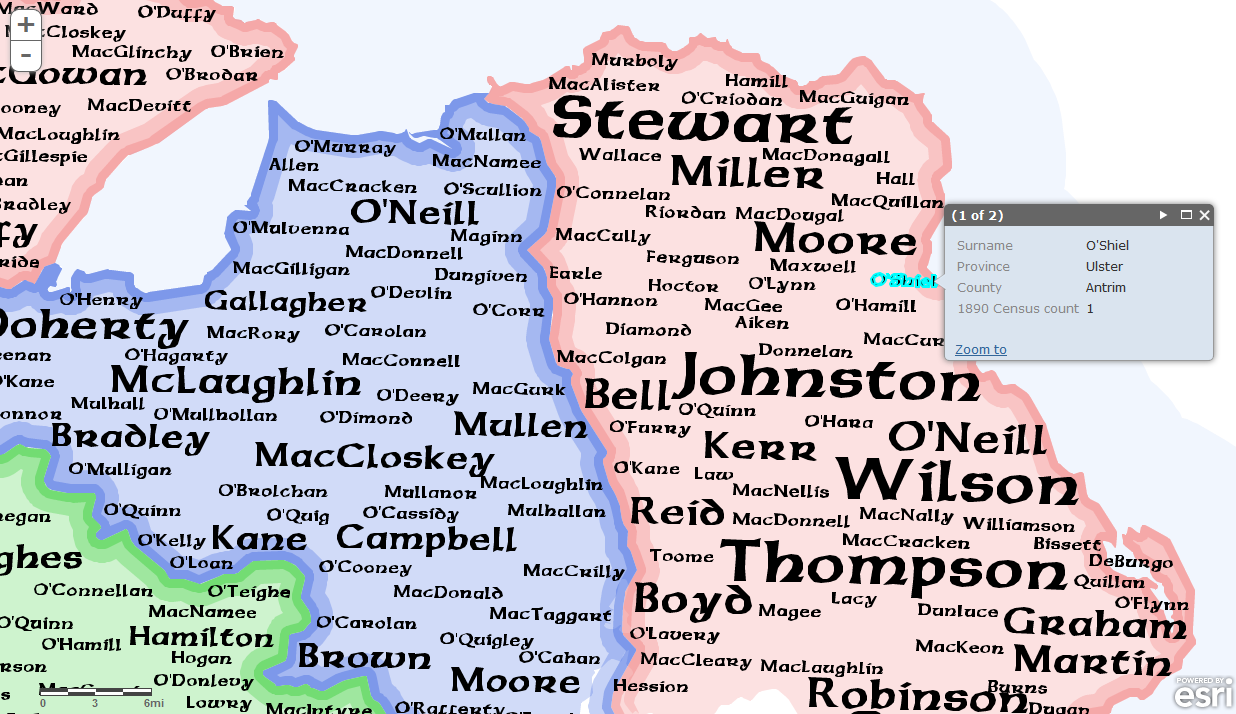 The Geo-Genealogy of Irish Surnames web map shows how modifying the visibility range for individual layers can be used to ensure each layer is legible on your web map at appropriate scales.  This avoids the problems of adding operational overlays to your web map that remain visible at all scales and which become illegible or meaningless at small scales. By using definition queries to create subsets of your data based on some quantitative characteristic you can also take advantage of the multi-scale characteristic of web maps to reveal patterns in the data at different zoom scales. This approach can be used for any dataset you add to your web map whether it involves creating subsets of shapefiles or .csv files. By splitting your data into meaningful subsets you give yourself greater flexibility when it comes to designing how they data appear on your web map using scale visibility ranges. Using pop-ups to provide access to background information can also be used to reveal contextual information where symbology would clutter the map.

In summary, simply exporting the layers of the original printed map and building a web map version would result in a poor map which serves no meaningful purpose by being online.  It would simply have been a graphical data dump. By applying some thought to the design and visibility of different layers at different scales you can build a meaningful graphical structure into the web map version so that it functions effectively across all scales.