what3words Overview - What it is, how it works

The geospatial industry is worth an estimated US150 billion annually, yet there is no precise global address or location reference system that can be used easily by everyone outside of it.

Specifying and communicating the location of assets, roads, bridges, canals, buildings, in fact any location without a standard street address is challenging especially when moving between devices, writing them down, telling someone over the phone, radio or in person. Try doing it with untrained people and errors are guaranteed.

At best, poor addressing is costly and annoying in developed countries, at worst it hampers the growth and development of nations around the world: ultimately, it costs lives.

what3words, a London based company that is part of Esri’s Emerging Business Program has a 3 word solution.

“Geographical information is a fundamental business tool. A simple way to communicate location is essential to unleash its full potential for everyone, what3words has solved a major aspect of that, particularly in geographies that are disadvantaged with lack of addressing and place name description data.” said Jack Dangermond, President of Esri.

“Addressing has just got easier.”

A simple address for everything what3words is an addressing and location reference system based on a global grid of 57 trillion squares of 3mx3m; each square has a unique pre-assigned 3 word address. 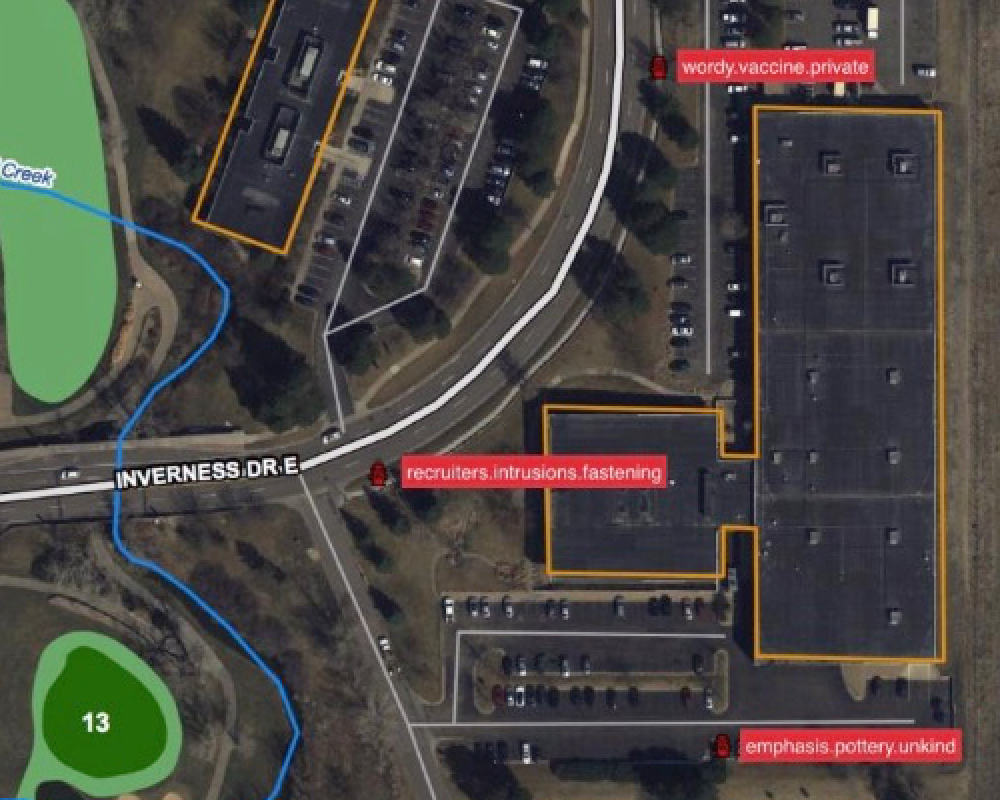 For example, recruiters.infusions.fastening is the location of a fire hydrant on Inverness Drive East highway in Denver, Colorado. This what3words system is being used by Esri partner Metcom911 to manage 57,000 fire hydrants serving over a million people to ensure fast and effective response to emergencies.

As Heather Hoelting from MetCom 911 explains. “I was receiving inaccurate lat/long information (DMS in WGS 84) from some non geospatial users doing field work collecting fire hydrant and other point data. I showed them how to use the what3words app and asked them to send the three words corresponding to said location to me. Then, I used the locator in ArcGIS to find the exact location. It works great! This application has saved me a lot of time and avoided lengthy emails trying to explain geodesy.”

The system works offline, has built in error detection and is available in 10 languages including English, Spanish, French, Portuguese, Russian, Turkish, Swahili. There are 15 more languages on the way including Arabic.

what3words has apps and a site as well as an API & SDK and is available as a locator, accessible via the ArcGIS platform.

The locator allows ArcGIS platform users to display the 3 word address for any location or search for a 3 word address, either individually or via batch conversion to and from coordinates. It makes full use of the Esri Geoinformation Model and is accessible online or offline, anywhere in the world.
The what3words locator can be configured at an organisation level, whatever the ArcGIS deployment model, so that any roles and users can access it across the entire ArcGIS platform.

The human-friendly nature of 3 word addresses combined with the scale and reach of ArcGIS means not only that everywhere now has a simple address, but that absolutely everyone can use it.

what3words is being used in over 170 countries by navigation, logistics, post, utilities, census and data collection organisations where inaccuracies and friction with coordinates cause erroneous data, incomplete data and ambiguity.

Is the world that badly addressed?

Around 75% of the world – over 135 countries – suffer from inconsistent, complicated or no addressing systems. It means it is difficult to receive mail at home, secure property rights, arrange aid deliveries, track epidemics like Ebola and tackle natural disasters.

In the other 25% of countries address systems don’t offer universal coverage and are often inaccurate. This costs economies billions.

50% of people who currently live in cities don’t have an address. In the recent US Census a massive 12% of households don’t actually have good location information and only 11% of Australia is accurately addressed.

Poor addressing and imprecise geocoding means last mile delivery is problematic and costs 28% of overall delivery costs. UPS estimates that saving each of their drivers one mile equates to a $50 million a year saving for the business. In the UK 0.5% of all deliveries fail due to poor addressing (IMRG). This costs businesses £831 million.

Satnavs can give you four possible routes to get “there”, with state of the art traffic avoidance and points of interest along the route. But defining “there” is actually our single biggest issue.

Poor addressing means friends are not met, remote assets are difficult to manage, aid can’t get to the people who need it most, deliveries are missed and local businesses can’t be found.

Latitude and longitude coordinate pairs do provide a precise location reference but, whilst this is great for machines and trained professionals, it is ineffective for people.

Coordinates are impossible to remember, even in the short term, and errors in understanding, transcription and communication make the widespread use of geospatial information prohibitive.

What’s under the hood?

Since it’s not a simple database, but an algorithm and word list that underpin the what3word system, our core technology is contained within a small file of around 12MB in size. This means it can be used offline with no data connection and installed on the simplest of smartphones and navigational devices.

The word list consists of 25,000 words per language, but 40,000 in English as the world’s oceans have been addressed as well as land. All word lists go through multiple automated and human review processes including removing offensive words and homophones (like sale and sail). We also ensure that the words are meaningful and in daily use in the local language.

When our algorithm sorts the words it takes into account word length, distinctiveness, frequency, and ease of spelling and pronunciation. Simpler, more common words are allocated to more populated areas that speak that language, while the longer, more complicated words are used in unpopulated areas. For example, short, common English words are given preference to areas in the UK rather than in the African Sahara where you are less likely to find a wandering Brit.

Importantly the algorithm shuffles similar-sounding 3 word combinations around the world to make it really obvious if you have made an error in typing or when saying them. For instance, table.chair.lamp and table.chair.lamps are purposely on different continents. In addition, smart error detection makes intelligent suggestions as you type even if you make typos.

As mentioned, what3words functions without a data connection. This solves a perpetual constraint when in remote areas with poor connectivity. Our system is also fixed and therefore impossible to change. There is 100% certainty that all instances of the system running everywhere in the world will provide the same 3 word address for the same location. One uniform word-based system for everyone eliminates the confusion caused by multiple conflicting numeric and alphanumeric codes.

Behind The Idea – Getting lost in music

He resorted to using the latitude and longitude coordinate system to be precise but realised that human beings aren’t designed to input 18 numbers without errors. At every event, without fail, trucks carrying equipment and musicians themselves simply didn’t arrive where they were supposed to be.

A particular low point was having bands and equipment strewn across various hillsides near Rome because the “address” they were given took everyone to different places, and a phone call from a keyboard player who said “it appears we may have sound checked at the wrong wedding in Birmigham”.

Chris discussed the idea of a more usable and less error-prone version of the latitude and longitude coordinate system with a mathematician friend, who subsequently wrote an early version of the what3words algorithm on the back on an envelope.

They quickly realised it could do more than help musicians get to gigs on time and the company was founded by the pair and two other friends in London, UK, in March 2013.

Add 3 word geocoder To learn more, see examples and add the locator to ArcGIS go to what3words.com/esri, find us in the Marketplace or get in touch with Steven Ramage steven@what3words.com – or your local Esri manager.

Steven Ramage is an accidental geographer. He got involved with GPS in the early 90s and has been working with location since that time. After an initial period working briefly with Oceonics (now Fugro) and then as the first market development manager for Navteq in Europe (now HERE), Steven was part of the Management Buy Out team at 1Spatial where he spent almost 10 years.

He then worked for the global non-profit geospatial standards development organization, the Open Geospatial Consortium or OGC. Most recently he was Managing Director of the international division of Great Britain’s national mapping agency, Ordnance Survey. Today he’s a director of what3words where he is “addressing the world”. He’s worked with Esri as a collaborator, customer and now as a partner. 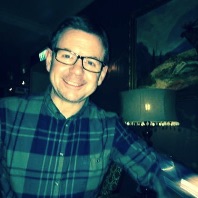 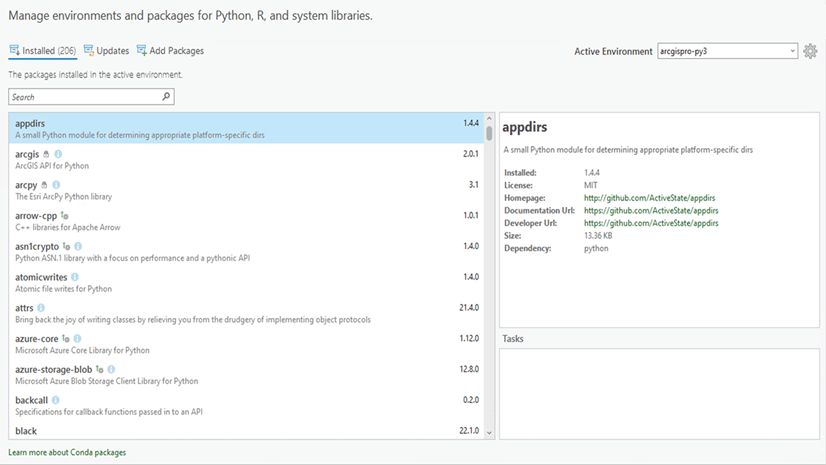 The All New Package & Environment Manager for ArcGIS Pro