Migrating your existing data into the Geodatabase

While I was at the user conference earlier this year I was getting a lot of questions about migrating to the geodatabase from other data formats. I talked it over with Derek Law and he thought he’d make a podcast about it (we’ll link to that podcast when it hits the net). After seeing the script for his podcast I decided that some introductory style posts would also be a good way to get the info out to our users.

So this is the first in a series of posts that will be addressing how to migrate to the geodatabase. We’ll discuss migration strategies for five common GIS data formats:

ArcCatalog is the ArcGIS Desktop application that allows you to manage and access GIS data. Within ArcCatalog, there are two general workflows to migrate GIS data into the geodatabase:

Importing data into the geodatabase – in the Catalog tree, select the geodatabase you want to place your GIS data into, right-click and select Import from the context menu, then choose the appropriate data import tool. 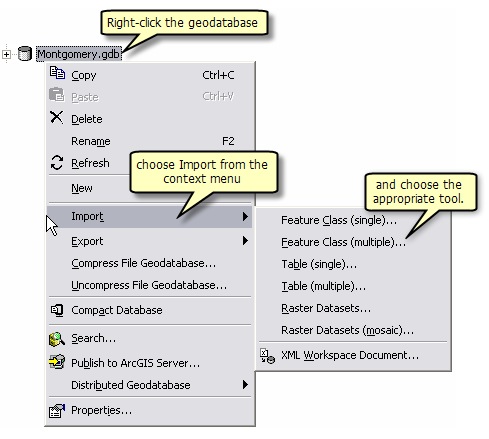 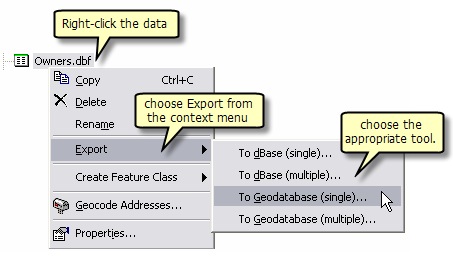 Both approaches use the same geoprocessing (GP) tools that are readily available directly within ArcToolbox, specifically in the Conversion Tools toolbox, in the To Geodatabase toolset. 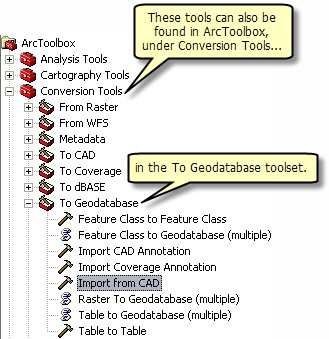 Since the To Geodatabase toolset migration tools are GP tools, you can leverage them within the ArcGIS geoprocessing framework.

This means that you can execute the migration tools in several different ways:

For more detailed information on the different ways to execute a GP tool in ArcGIS, look in the Geoprocessing help book, in the ArcGIS Desktop help.

Migrating Shapefiles into a Geodatabase

There are two key GP tools for migrating your shapefiles into the geodatabase: 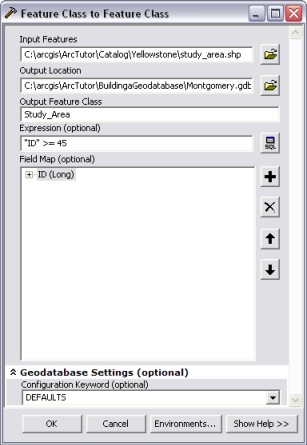 You will need to specify the following:

There are also 3 optional input parameters:

For the Field Map parameter, we recommended that you drop the FID, shape_length, and shape_area attribute fields, because these will be replaced by new fields when the shapefile becomes a feature class in the geodatabase. 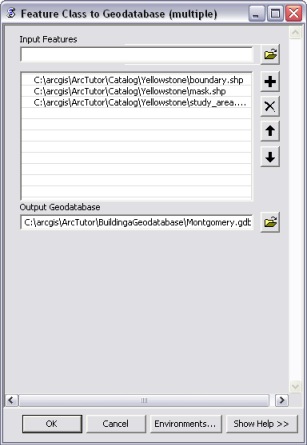 Using GP tools makes the task of migrating shapefile data into a geodatabase quick and painless. As mentioned before, GP tools can be used in a number of different ways including initiating the tools through ArcCatalog, using them directly from the toolbox, or scripting the tool execution in python.