Managing your Display Caches in ArcMap – New at 10

Caching is a great way to speed up the performance of your day to day usage of ArcMap.  By retaining previously computed extents, ArcMap can display those extents much faster the next time you visit them.

At ArcGIS 10, we’ve consolidated the cache settings for Globe Cache, GIS Servers, and the new Basemap Layer cache in one dialog.  You can use this dialog to change the location on disk that these files are written, evaluate disk usage for cache storage, and to completely clear the cache files if desired.

In ArcMap there is a new tab called Display Cache in the ArcMap options dialog.  This new tab supersedes and enhances the functionality that was previously found in ArcCatalog Options dialog’s GIS Servers tab.

When you open this dialog, ArcMap begins calculating the storage space used by your GIS Servers cache, your Basemap Layer cache, and your GlobeCache.  You can choose to wait for the calculation to finish, or you can use any other part of the dialog without waiting.

Map service layers also have a per-layer cache that can be modified independent of the Display Cache.  To access the cache settings for a given layer open layer properties and visit the Cache tab. 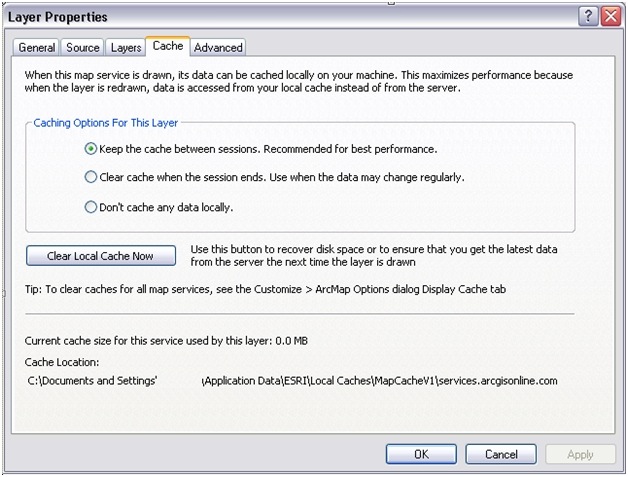 Here you can clear the local cache for this layer, see where the cache is being stored, and evaluate the amount of space being used by this cache presently.  You can also modify the caching options to change when and if a cache is stored for this particular layer.

Note that even if a layer is contained in a Basemap Layer, you’ll still get the Cache tab in layer properties so that you can invalidate the cache for this layer.  Keep in mind that this will also invalidate your Basemap Layer cache, resulting in a slight degradation in performance on the first draw of each new extent.  It’s also worth noting that some options, such as “Don’t cache any data locally” are not compatible with Basemap Layer display.  You’ll get an error when you drop these layers into a Basemap Layer.

We hope that you’ll find these changes to display caching in ArcMap useful.  Give them a try, and let us know what you think.