In ArcGIS Pro, there are a couple of tools in the Spatial Statistics toolbox (Modeling Spatial Relationships toolset) that help you to compare maps. The Local Bivariate Relationship tool analyzes the relationship between two numeric variables. The output visualizes areas where the variables are related and also identifies the types of relationships across the study area. Another tool, Colocation Analysis, measures local patterns of spatial association between two categories of point features and helps you to analyze where the category A points are more likely to collocate the category B points. In ArcGIS Pro 2.7, we have released a new tool called Spatial Association Between Zones, which evaluates the degree of spatial association between two regionalizations in the same study area. This tool also identifies where correspondences are between the zones on two maps and where are not. With this tool, questions like “How different are 2000 census blocks and 2010 census blocks?”, “How consistent are Building America climate zone and IECC climate zones?”, or “How do the crop types change from 1999 to 2019?”, which has been a very visual and manual process in the past, can now be quantitatively assessed.

In this blog, I will illustrate the basic concept of Spatial Association Between Zones and show you how to analyze the change in climate zones using this tool.

The Concept of Spatial Association Between Zones

Step 1. Let’s say there are two maps, Map A and Map B (Fig 1). The tool overlays these two maps and compares Map A zones to Map B zones. In Figure 2, for the red zone in map A, it looks in Map B and says there is only one zone type which is the purple zone that falls within the area of the red zone. So, the red zone gets the highest local correspondence measures, which is 0. Similarly, for the green zone (Fig 3), and the blue zone (Fig 4) of Map A, the correspondence values are 0.

In addition to the local measures of the correspondence between two regionalizations, the most important metric – Global Measure of Spatial Association – tells you the overall spatial association between zones on two maps.

Figure 8 is another example, orange zones and blue zones in the left graph have higher Global Measure of Spatial Association and much have a lower association in the right graph.

How does the climate zones shift?

1. The data used in this blog article

The Global Measure of Spatial Association is a derived output and also shown in the Geoprocessing Message (Fig.13). The number indicates the degree of spatial association between zones on two maps, with closer to 1 representing a higher association. Overall, the value of 0.64 tells that these two maps are somewhat similar.

The output features (Fig.14) visualized by bivariate colors scheme (Fig.15) tells you the local differences. The lightest grey indicates a high correspondence between two maps in both directions (Both High). As you can see in Figure 14, Northern and Sothern Africa, the Southwestern region of North America, and Western Australia are in the lightest grey, and it means the Hot Dessert Climate Zone stays relatively constant across 100 years. Tropical Rainforest Zone including Southeastern Asia, the northern part of South America, and the middle region of Africa won’t change a lot because they are also in the lightest grey. The U-shaped region of North America, a part of Russia, and some areas of the Southwestern region in China are Cold Semi-Arid Climate Zone. They are in the darkest purple in Figure 14, which indicates the lowest level of correspondence between two maps (Both Low). Darker shades of blue indicate the lower correspondence of the overlay zone (Climate Zone 2076-2100) within the input zone (Climate Zone 1976-2000). Take West Europe for example, it is in the darker blue, and the color means the Previous Koppen Climate Zones here, Temperate Oceanic Climate Zone, will be decomposed into various climate zones after 100 years.

In general, the higher latitude regions in both the North and South hemispheres are leaning toward blue. This indicates that the cold and temperate climate zones such as Tundra climate, Monsoon-influenced subarctic climate, and Temperate oceanic climate are breaking into various climate zones in the future. In contrast, regions closer to the Equator are leaning toward pink meaning that the dry climates such as Hot semi-arid climate and Tropical savanna with dry-winter are going to incorporate more different climate zones. It could be related to global warming – the earth is getting hotter and dryer.

In this blog, I demonstrate how Spatial Association Between Zones tool help to quantitatively evaluates the change across time. Another application is that a demographer can compare the 2000 census blocks with the 2010 census blocks to detect the overall change and the small-scale boundary shift rather than relying on crosswalk tables. This tool can also help you to explore the relationship between two variables. For example, an agricultural extension agent can compare crop type with climate zones to inform planting decisions in a changing climate. In addition, this tool can be used to evaluate the classification or clustering results. For example, a climatologist can compare two climate zone maps (BA and EPA Climate Zones) to determine the consistency between the two climate classification methods and where they differ. 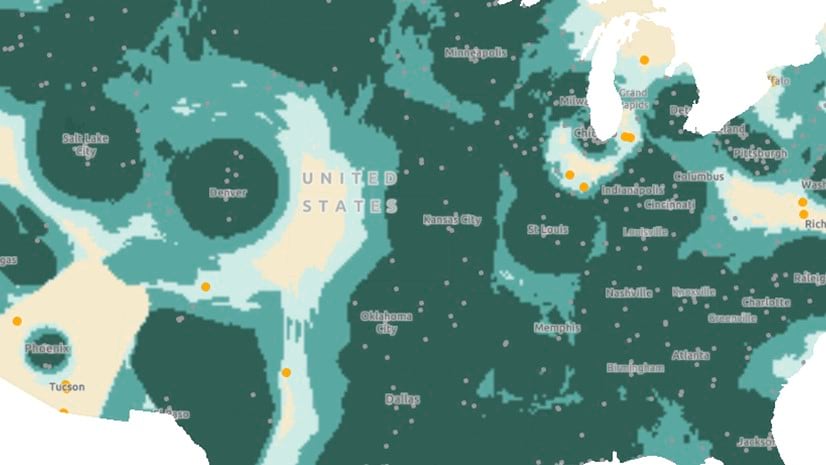 All the new tools and capabilities in ArcGIS Pro 2.7 for spatial statistics and data engineering.