Tropical storm Imelda (September, 2019) was the fifth wettest tropical cyclone on record in the continental United States. At one weather station in Jefferson County, Texas, over a meter of rain (43 inches) fell from this single storm.

Since the beginning of the 21st century, the Greater Houston area added nearly 2.8 million people. With the additional impervious urban landscape that goes along with all this added population, controlling runoff becomes a major concern. Rain that used to enter the water table through soil instead runs off into the stormwater system and into the bayous. How can we find out where the landscape has changed to hardscape since 2001?

We can see where the impervious surfaces changed by using definition queries and raster functions in ArcGIS Pro. Let’s use the new USA NLCD Impervious Surface Time Series layer to find out what areas have changed the most in the Houston area since 2001.

First, add the new USA NLCD Impervious Surface Time Series layer from the Living Atlas. To do this, open ArcGIS Pro, and insert a new map in your project if you don’t have one open already. Next click on add data in the map ribbon. Click on Living Atlas, and for the search term, type ‘impervious’. Click the layer called USA NLCD Impervious Surface Time Series and then click OK.

Zoom in to Houston, Texas, and turn the two layers on and off. By turning them off you can see the difference in impervious surface in Houston over the 18 year span of the data. (In that timeframe, Greater Houston’s population increased 65%.) You also have visual confirmation that you are viewing two different years of the same dataset.

As a suggestion, change the color ramp to display the layer a bit better, then also you can turn off the impervious layers.

With raster functions you see the result first, and then can write an area of the difference to disk if you want a more permanent raster layer for a particular area. To make a copy, use the copyraster tool in the data management toolbox, specifying the temporary raster layer as the input for the tool. Tip: In the environments tab of the copyraster dialogue, be sure to choose ‘same as display’ for the extent. This will copy only the image you see in the extent, the Houston area in our example.

Finally, let’s change some symbology on the temporary raster function layer so it can be understood in context. Right click the temporary raster function layer (called Minus_Impervious Surface 2016_Impervious Surface 2001) in the table of contents, and choose symbology. In the symbology dialogue, click the mask tab, and where it says display background value, check the box. Now the layer will display only what has changed. Places that did not change are now transparent.

Applying transparency to the temporary layer will help more context show through. To do this, click the layer in the table of contents, then under Raster Layer in the ribbon, choose Appearance. Move the slider in the appearance ribbon to 50% to make the layer 50% transparent. 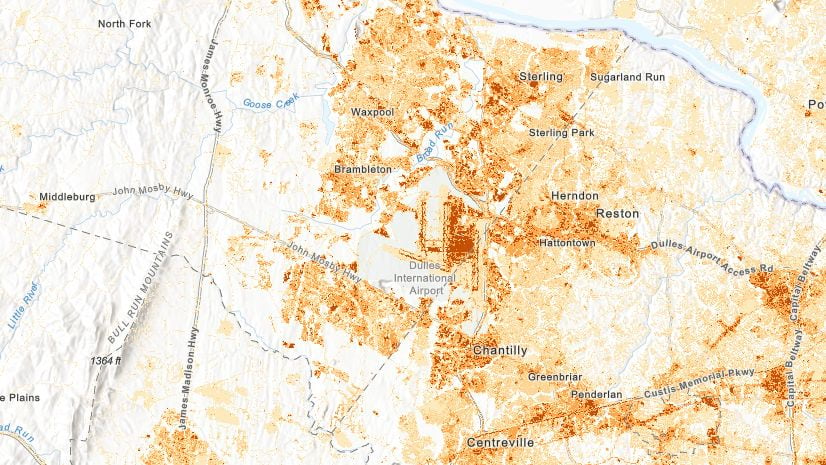 A new service in the ArcGIS Living Atlas of the World provides a time-enabled view of changes in impervious surfaces in the United States.