About fonts in ArcMap symbols

A typical Intel text font is a complete set of characters in a particular size and style of type. (An Intel-based system is a computer that uses a CPU from Intel, typically a Core or earlier Pentium chip). You are probably familiar with common Intel system fonts such as Arial, Times New Roman, Cambria, etc. But some fonts contain graphic symbols rather than letters and numbers. The majority of the fonts that are provided with Esri products are designed and built to function as marker symbols as opposed to text fonts. These derived symbols are called “glyph characters” and can be used to create what are called “character marker symbols” in ArcGIS. The glyph characters in the Esri fonts have had adjustments to their font glyph extent which makes them more useful as markers then as text. The extent (the bounding box of the character) characteristic most often modified is the side-bearings (the blank spaces on either side of a character) of individual characters.

There are a few things you should know about fonts before you use them in ArcMap symbols: 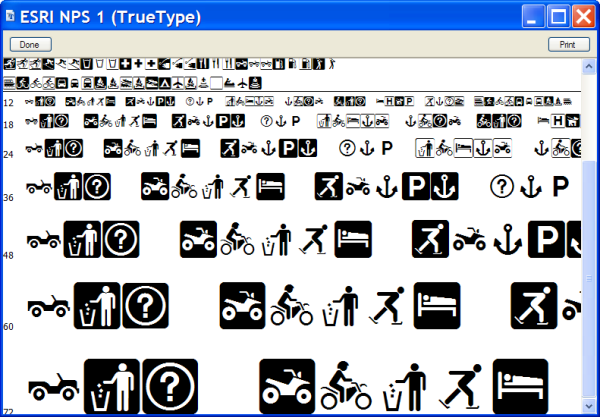 In an upcoming blog entry, we will talk more about using fonts in ArcMap symbols.

Thanks to Aileen Buckley for her help with this blog entry!