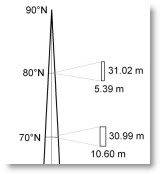 If you have used any raster data to make maps you may have at one time or another asked yourself, “What is the appropriate resolution of raster data for the map I am making?” This question is tied closely to a basic principle of map compilation that you may have learned in your beginning cartography course: “Always compile your map from source materials of the same or larger map scales”. In our age of digital elevation models and other raster datasets, this basic principle of map compilation can be restated as: “Always create your raster map from data at the same or higher spatial resolution than the ground resolution of your map display grid cells”. The ground resolution of your map display grid cells will depend on the scale of your map.

An equation you can use that relates map scale (1/x), raster data resolution, and map display resolution is:

In the simple case of a square cell digital elevation model (DEM), such 30m x 30m UTM grid cells, the optimal ground dimensions of the pixels on the map should be the same (or larger) than the DEM spatial resolution. For example, at a map pixel density of 4000 pixels per meter, the optimal mapping scale would be 1/x = 1 / (30 m/pixel × 4000 pixels/m) = 1:120,000 (or smaller). This recommendation, of course, is for large to medium scale mapping where there is minimal scale distortion across the map projection.

An equal angle DEM grid is more complex because the cell dimensions are equal increments of latitude and longitude. For example, you can see in the figure below that the National Elevation Dataset (NED) 1″× 1″ DEM based on the WGS 84 ellipsoid has latitudinal grid cell dimensions that vary slightly from 30.71m at the Equator to 31.02m at 80°N. Let’s take 40°N, where the grid cell height is 30.84m, as an example latitude. For the pixels and DEM cells to be of the same spatial resolution, the DEM grid cells would be displayed on a Plate Carree projection of scale 1:100,000 at a pixel density of 100,000/30.84 m/pixel = 3,243 pixels/m or 32.43 pixels/cm, which is at the pixel resolution where individual pixels may just be distinguishable to those with excellent vision.

The longitudinal relationship is slightly more complex because the horizontal DEM grid cell dimension decreases with the cosine of the latitude. For example, a NED 1″× 1″ DEM grid cell at 40°N has a horizontal dimension of 30.84m × cos (40°) or 23.62 m, a significant increase in spatial resolution.

The first thing we need to know about the Mercator projection (x = longitude, y = ln(tan(?/4 + lat./2) is that both its north-south and east-west scale distortion is given by the equation 1/cos(latitude). Let’s say we make a projection with a display resolution of 40 pix/cm or 4,000 pix/m so that the size of a pixel on the ground equals the resolution of a 1″× 1″ DEM based on an authalic sphere with circumference 40,030km, or 30.89 meters per second of latitude and longitude at the Equator. For a pixel at this 4,000 pixel/m density to cover a ground area of 30.89 by 30.89 meters at the Equator, the map scale must be 1/x = 1/(30.89 × 4,000) = 1/123,549. At this scale the DEM resolution at the Equator equals the ground dimensions of the pixel — an ideal mapping situation since the DEM grid cells and map pixels are at the same spatial resolution!
Moving north and south of the Equator on the Mercator projection, both the latitudinal and longitudinal scale distortion increases by 1/cos(latitude). Map projection scales at 10 degree latitude increments from 0 to 80 degrees for a 1:123,549 scale map at the Equator are in the following table, along with the corresponding ground width dimensions of a pixel on the map. The corresponding east-west resolution of a 1″ DEM grid cell is shown in the fourth column.

From these pixel and grid cell ground dimension values, we can see that going moving from the Equator toward the pole, the ground area covered by map pixels systematically decreases according to the cosine of the latitude. This decrease in pixel area on the ground means that progressively coarser DEM grid cells are being used to populate progressively smaller pixel areas on the ground — an undesirable situation. However, this systematic decrease in pixel ground dimension is identical to the decrease in the east-west extent of 1″ grid cells in the DEM, so that the DEM remains optimal for mapping at all latitudes since the pixel and grid cell dimensions are identical in the east-west direction.