You know those times when you’re just enjoying a normal day and minding your own business and out of nowhere, Devin Lavigne from Houseal Lavigne sends you an Email with some content that just simply blows your mind!
Well, that’s exactly what happened to me last week and I just knew I had to write a blog post about it and hope that I am somehow able to do this justice.

Houseal Lavigne is a Chicago based professional consulting firm specializing in all areas of Community Planning, Urban Design, and Economic Development.
One of the many reasons why we love them, is because they have been using CityEngine in their projects pretty much since day one.
You might have seen us showcase their CityEngine work on the Oshkosh Corporation World Headquarters…

…or the Battle Creek Master Plan.

As amazing as this already is, this blog post today is not about any of that, this blog post is about the team based action game “Counter-Strike” (yes, you read that correctly!).

I’m going to wager a guess that a good percent of you reading this article have had an introduction to this game at some point in your life. My introduction to it was in my University dorm in Melbourne in 2005 – which almost caused me to throw my Dell Inspiron 6000 laptop out of the window numerous times in a bout of frustration.

What are you talking about?

So, what does all this gaming talk have to do with Houseal Lavigne and ESRI? Well, just like Taisha circa 2005, the employees at Houseal Lavigne like to ring in the weekend with a little bit of team based action game fun.

“To let off some steam and stress from the week, we play Counter-Strike on most Friday afternoons. We create some teams, or team up against some AI bots, and spend an hour or so shooting each other. We like to say we take our work seriously, but not ourselves seriously. So, when deadlines are met at the end of the week, we all join a private server – and everyone has some fun.”

…and so, to make the whole thing even more fun, Devin and Nik Davis worked together to surprise their office with a new Counter-Strike map:
The Houseal Lavigne Office in Downtown Chicago.

This map is so incredibly detailed and although I have never personally visited the Houseal Lavigne office (feel free to invite me for some game time, Devin!), I feel as though I now know exactly how the office and downtown Chicago look.

To give you an idea, here are some examples of parts of the city as seen in Google Street View vs. the map created by Devin and Nik.

How was it made?

In case you’re wondering how this Counter-Strike map masterpiece was created, here are a few details for you.

The interiors were predominantly created in Trimble SketchUp and the exteriors and urban environment was made with CityEngine and ArcGIS (obviously, as if you would use anything else!).

We used the City of Chicago’s GIS data to create a Downtown massing model. Then we used CityEngine’s viewshed analysis to thin the number of visible buildings (critical for fast game play) down from 738 to about 100.

How was it rendered?

The whole thing was rendered in real-time in Valve’s Hammer Editor.

Some of you reading might wonder why this wasn’t done in Unreal Engine. After all, this seems like the perfect use-case and this is one of the workflows that I have been going on and on about heavily in recent times. The simple answer to that, is that this map has been years in the making. Long before we even announced our collaboration with Unreal Engine, let alone had plans for the workflow. It’s so great that Devin and Nik managed to get their CityEngine models into Hammer though.

I was curious as to how they did it and just in case you are too: it was brought in by way of SketchUp and some very buggy 5-year-old plugins.

In my opinion, Houseal Lavigne is a wonderful example of a company who puts staying on top of tech advancements high on their priority list and doesn’t shy away from trying out new tools. Devin has created some amazing CityEngine rules and tenaciously taught himself how to script in CGA, despite not having a background in software development. To me, this is a testament that CityEngine can be used by everyone and although the learning curve might be a little steep at times, there is so much potential to unlock.

So, if you’re not already a CityEngine user, then download your free trial today (like, right now!) and become the next Devin Lavigne or Nik Davis!

In case you haven't heard, we released CityEngine 2017.1 two weeks ago! We are super excited about the new features, which you can catch ... 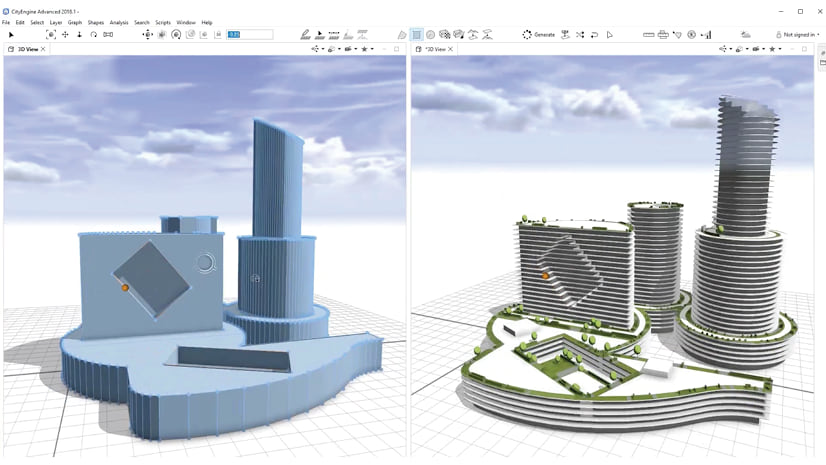 Learn all about new features and improvements in the Esri CityEngine 2018.1 release.