Layer pop-ups are an important part of crafting the complete map information experience. Pop-ups can transform an otherwise dull list of attributes into a far more meaningful display of intuitive and engaging information for your audience. Arcade can be thought of as a collection of useful tools that can be applied to craft the very best pop-ups, leveraging functions and logic to perform calculations and geometric operations, format text, access data from other layers, and much more.

Arcade is an expression language that is supported across ArcGIS. It can be used to perform calculations, manipulate text, and evaluate logical statements. Arcade exists within a profile, or context, that defines the parameters that are available to the script as global inputs and the output expected from the script. This blog article focuses only on the Popups profile and offers an overview of how it is used to craft layer pop-ups.

Arcade in pop-ups can be used in two ways; to create attribute expressions used in text elements that can be evaluated like fields, or as separate Arcade content elements that return a complete block of content. Using Arcade expressions and elements, you can take your pop-ups to the next level. Pop-ups: the essentials provides an overview of pop-ups and how they can be configured.

Arcade enables you to work with data dynamically to perform calculations and manipulate data on-the-fly. If you have improperly formatted attributes, need to do a conversion, need to perform mathematical operations (e.g., sum values or calculate percentages), use logical expressions for branching, or perform geometric operations (e.g., calculate areas or intersections).

Arcade provides a straightforward, Excel-like way, to manipulate data without having to go back to the source. This is especially useful if you don’t own the source—Arcade can be applied to any feature layer in a map.

Use these links to jump to a section of interest. Open the Arcade examples map to follow along.

You can follow along by viewing the sample map that has the layers and expressions covered in this blog article. To view the expressions, open the layers pane from the Contents (dark) toolbar and select the layer you want. On the Settings (light) toolbar, click Pop-ups, then Attribute expressions.

Tip: A great way to learn more about how to author and use Arcade expressions is to open any Living Atlas map or layer, then examine the pop-ups and expressions.

Pop-up content blocks, or elements, are the building blocks of pop-up information. Pop-ups can be composed of field lists, text, charts, images, or Arcade.

To view the content blocks, open the layers pane from the Contents (dark) toolbar and select the layer you want. On the Settings (light) toolbar, click Pop-ups, then view the list of content blocks. Arcade elements are listed using the code symbol – </> – and titled Arcade.

The Arcade editor is used to create new attribute expressions and Arcade content blocks, or edit existing ones. It includes the following:

Globals are special variables that can be used in expressions. $feature references the feature you click on your map to open the pop-up. This global is used to retrieve specific attributes (fields) for the feature. For example, $feature.name returns the content of the field “name” for the feature.

Functions are used to calculate values in expressions. Functions are categorized into mathematical, text, data, logical functions, and so on. For example, Round is a mathematical function that rounds the input numerical value to the specified number of places, and returns the new rounded number. Each function has built-in help so you can learn how to use them. You can also create your own custom functions for use in expressions.

Constants are fixed variables that can be used in expressions. For example,  TextFormatting.NewLine inserts a new line, or line break, into the text.

Existing returns all existing expressions, making it easy to reuse and modify them. This tab is not available when creating Arcade content blocks.

The text element shown below uses the {PEAKNAME} and {ELEV} fields to create the pop-up.

Follow these steps to create the first expression that converts the upper case name to proper case.

Step 1 — In the Arcade editor, begin by doing the following.

a – Change the default name to something that more meaningful and easier to recognize.

b – Add a comment (using the double forward slashes //) to describe what the expression does.

d – Click the arrow to the right of the feature globals to show all available fields.

Step 3 — Click the Functions tab to view the available functions. Scroll down and use the function name to identify possibilities. Click to add the function to the expression.

Tip: Click the information button (circled in green in the image above) to learn more about the function.

Step 4 — The function takes a text value as the input and returns proper case text. Edit the expression so that $feature.PEAKNAME is the function value input.

Step 7 — Use similar steps described above to create another expression that converts the elevation in feet to meters.

This expression can be used in the text element as shown below.

Add formatting to the expression

To add text formatting to the expression, return the height in meters as a string using the Text function and add the desired formatting using the hash notation to the returned text.

Since expressions are treated exactly like fields, we can format the FeetToMeters expression by selecting it in the Fields pane (expressions are found at the bottom of the fields list) and adjusting the formatting.

Additional text typography, such as text size, bold or italic text, and color can be applied to expressions, text, and fields to achieve the desired result.

You can follow along by viewing the sample map and opening the Sample Pop-ups layer group, then selecting and viewing the Peaks (Content Expressions) layer. In this example the Arcade content element is similar to the pop-up created with attribute expressions above, with some additional HTML styling. Compare Peaks (Expressions) and Peaks (Content Element) to understand the two approaches.

When you open the Arcade editor, there are several templates that help you get started. By default, the Rich text template is opened.

a – Name. Change the default name to something more meaningful and easier to recognize.

b – Edit and add comments to describe what the expression does and also use comments to document the steps along the way. The better you document your Arcade, the more understandable and maintainable it will be.

c – Use the Globals and Functions tabs to construct Arcade. This is the same as done with attribute expressions.

e – The explicit Return is the block of rich text that the Arcade content element displays in the pop-up. In the case of rich text, this provides full HTML styling to craft the returned content.

The final result is the pop-up shown below.

This is a simple example using Arcade content, with lots more potential to go beyond the basics. See the Peaks layer in the Final Pop-ups group for an example.

The following are examples of common uses of Arcade in pop-ups. Many of these are used to configure pop-ups in the Arcade samples map used in this blog article. Other examples can be found in ArcGIS Living Atlas maps and layers or the Arcade Function Reference.

This expression will return proper case text. The Proper function has two options – capitalize all words or capitalize the first word only. If COUNTY contains the string “SAN DIEGO COUNTY” the expression returns “San Diego County.”

There are many other text functions for working with text. For more information, see Text Functions.

Convert codes or abbreviations to a readable string

Converts an abbreviation or code number to an understandable string. For example, if the field value is “CAC” the expression will return “Cades Cove.”

This expression checks the contents of AFIELD and will return “Unknown” if it is null, the field has spaces, or the feature is empty. Otherwise, it returns the field contents.

Another approach is to use DefaultValue to compare against null.

Get attributes from another layer in the current map

Using expressions, you can combine attribute information from other layers in the same map into a single pop-up. Use FeatureSetByName to find the layer using its name.

Other functions can be applied to the feature set to retrieve the desired information, such as Count or geometry functions such as Intersect.

Get attributes from a layer not in your map

In this case a feature set is returned from another layer that is not in the current map, referenced by its ID.

In text blocks you can add color to expressions in the same way as coloring text or attribute values (select the expression, then use the color picker). In this example two expressions were constructed to evaluate the {STATUS} field which contains one of two attribute values; Active or Inactive. While the logic here may initially seem confusing, we are creating two expressions which return the string value Active or Inactive. If the expression does not evaluate to True, Null is returned and it will not appear in the text block.

The first expression, titled IsActive, evaluates whether the field for the feature contains the word Active.

The second expression, titled IsInactive, evaluates whether the field for the feature contains the word Inactive.

Color is applied to the expression, which is treated like a field, in the text editor. The results are shown below.

For more information, see the following:

Corporate technology evangelist and advocate at Esri, focusing on ways to broaden access to geographic information and helping customers succeed with the ArcGIS system. On a good day I'm making a map, on a great day I'm on one. Email bszukalski@esri.com or connect on LinkedIn (https://www.linkedin.com/in/bernszukalski/). 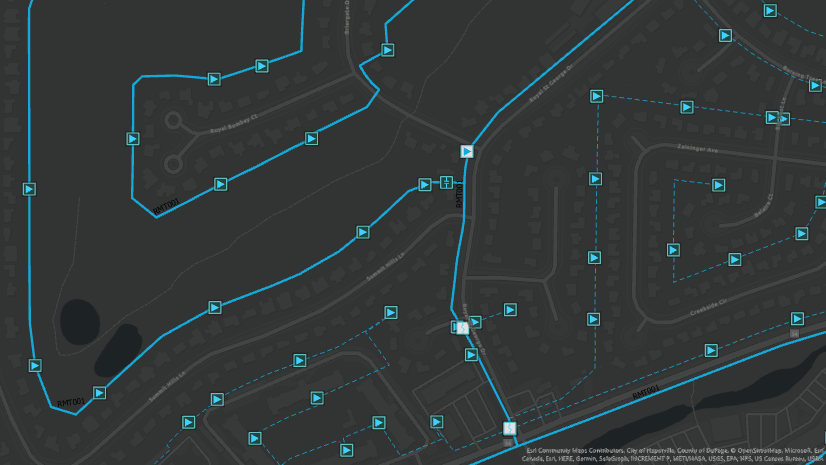