A lesser-known, but powerful, feature of the ArcGIS API for JavaScript (JS API) is the ability to create dynamic MapImageLayer sublayers from data in dynamic workspaces.

A while ago, I wrote about how you can generate data-driven visualization styles for dynamic layers using the 3.x series of the JS API. As of version 4.7 of the JS API, you can now generate these visualizations with more intuitive, readable code. This post will demonstrate how to create this 3.x JS API web app with TypeScript using the ArcGIS API 4.8 for JavaScript.

This sample allows you to explore ancestry data in the United States. It demonstrates how to do the following:

1. Join a non-spatial table with ancestry data from a dynamic workspace to a layer with geometries representing U.S. states

This is doable with the 3.x JS API as seen in the original app, but is a little inelegant and cumbersome. The 4.x JS API makes the workflow for creating this app simpler thanks to the following:

Constructing the joined dynamic layer in 3.x involves ~80 lines of code, but can now be done in about 25 lines using 4.x.

Notice you don’t even need to specify which type of dynamic layer sources you need for each side of the join. The API figures it out for you.

Create a FeatureLayer with a dynamic source directly from a Sublayer

Starting at version 4.7, you can create a FeatureLayer with a dynamic source directly from a Sublayer. This is done with the createFeatureLayer() method on the Sublayer class.

In 3.x, you have to construct a new FeatureLayer, referencing the dynamicLayer endpoint in the URL, and set the same source you created for the Sublayer in the constructor options.

In 4.x, you simply call the createFeatureLayer() helper method.

You can use a FeatureLayer instance to verify the join was successful by setting a breakpoint in your developer tools and checking the fields array on the layer.

A FeatureLayer instance is required for this app because generating a renderer with a Smart Mapping method requires either a FeatureLayer, CSVLayer, or SceneLayer. However, the renderer generated from Smart Mapping can be applied back to a MapImageLayer sublayer.

Generate a renderer with Arcade

This app allows you to explore ancestry data in the United States, while demonstrating how different classification schemes can affect a visualization. To generate the appropriate renderer I use the createClassBreaksRenderer() method on the colorRendererCreator Smart Mapping module.

All that’s needed for the renderer creator method is a basemap, a FeatureLayer, and a field name. You can optionally change the classification method, which I exposed as an option to the user for educational purposes.

In the 3.x app, the field selected by the user in the dropdown menu is passed to the field parameter and normalized by a total population field. This works for creating a good visualization, but it makes the legend look awkward since all values are ratios (values between 0 and 1). I added extra logic to format the labels of the generated class breaks as percentages since it makes the legend easier to read and comprehend.

Smart Mapping now supports Arcade expressions, which means you can pass an expression that returns a number instead providing the name of a numeric field. In the 4.x version of the app, I use an Arcade expression for formatting the ancestry to population ratios as percentages. Now I don’t have to loop through the breaks and modify the labels later on in the app.

Since this app is written with Typescript, you can take advantage of template literals when constructing the Arcade expression used as the basis for the data-driven visualization. I also take advantage of async/await since it simplifies the structure of the code.

Update a Sublayer’s renderer and popup

Updating MapImageLayer sublayer properties in 4.x, such as the renderer and popupTemplate is much improved. In 3.x you have to do the following just to update the renderer of one sublayer.

In 4.x, it takes just one line of code after waiting for the promise returned from the renderer creator to resolve.

Once again, here’s the final app, along with the source code.

The ArcGIS API for JavaScript version 4.7 or greater provides a better coding pattern for generating renderers for MapImageLayer sublayers. The same functionality works in 3D SceneViews. However, if you would like to take advantage of 3D symbology, you’ll need to add the dynamic FeatureLayer instance to the map rather than the MapImageLayer since MapImageLayer doesn’t support 3D symbology.

A lot of what was discussed in this post assumes some prior knowledge of key concepts of MapImageLayer and Smart Mapping. To read more about these topics, I recommend the following:

1. What’s the deal with MapImageLayer – This blog provides a nice overview of how to use dynamic layers in web apps and how to set up a dynamic workspace on your server.

2. Using Smart Mapping in custom web apps – I’ve written a number of blogs on how to build data exploration apps with the smart mapping tools available in the JS API. Here’s one to get you started.

The 4.x version of the sample app was written in Typescript. If you are new to TypeScript, or developing web apps in TypeScript with the JS API, I encourage you to read this blog and this guide, which discuss the benefits of developing with TypeScript and help you with getting started.

A non-Typescript version of this app can also be explored in the ArcGIS API for JavaScript documentation.

Not too long ago I wrote a post about how and why you may want to use Smart Mapping in custom web apps using the ArcGIS API for JavaScrip... 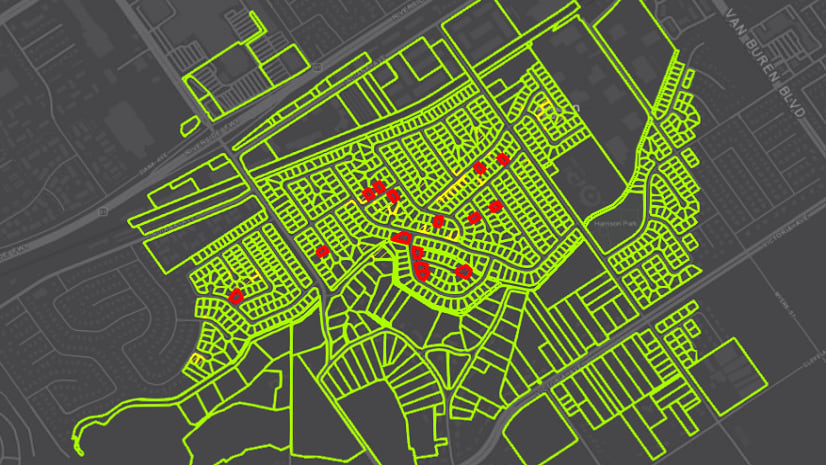 What’s the Deal with MapImageLayer?

Learn more about dynamic layers and the exciting MapImageLayer class with the 4.x version of the ArcGIS API for JavaScript.