As many users know, American Community Survey data is a rich source of information used in ArcGIS products. This data, released annually by the U.S. Census Bureau, provides comprehensive information on everything from people’s housing situations to their educational attainment. Users can access many of the American Community Survey (ACS) variables across ArcGIS products—they’re an obvious go-to source for work related to demographics.

What may be less obvious, however, is that sometimes different ACS variables are available in different ArcGIS products. In this article, we are going to focus on two ArcGIS products where ACS data is available: Living Atlas and Business Analyst. Nonprofit organizations, social scientists, businesses, or government agencies can use either of these products to understand demographic patterns and trends with ACS data. We will explain some of the similarities and differences, and why a user might decide to use ACS variables in Living Atlas over Business Analyst or vice versa.

What variables are in each product? Why are they different?

The ACS includes thousands of variables with each release from Census; in the 2016-2020 release it was over 20,000! From this large dataset, variables are chosen for different ArcGIS products to tailor to their slightly differing user bases, although there can be some overlap between products.

Variables chosen for Business Analyst (also known as BA) have traditionally had a more business-focused audience, while the variables selected for Living Atlas have been more public policy-oriented. Our long-term goal is to make ACS data offerings seamless through the ArcGIS ecosystem, so look for improvements in consistency over time.

Let’s walk through some of the most significant differences and operative questions when deciding between Living Atlas and Business Analyst for your ACS needs.

Is there a cost for access to ACS variables?

ACS data is free in Living Atlas. Accessing ACS data in the Business Analyst Web App, on the other hand, requires that you purchase the product or add it to your existing ArcGIS Online subscription.

What geography levels are available?

Living Atlas data is available in U.S. Census standard geographies, down to tract level. It is a great resource for ready-to-go symbolized map layers to add to your project.

With only a few exceptions, ACS data in Business Analyst is available down to census block group level, so it provides a finer geographic resolution than the data in Living Atlas. It can also be utilized in geographies not provided by the census, such as Zip Codes, DMAs, and custom polygons and drive-time areas.

What can I do with ACS variables in the different products?

ACS data in Living Atlas provides pre-rendered feature layers of census standard geographies, including custom calculated values that users often ask for. Basically, the data is ready to go “out of the box,” already symbolized for use in web maps with informative pop-ups to explore.

ACS data in Business Analyst can be used in more complex workflows, such as analyzing ACS data within drive-time areas or to build reports and infographics. For example, say you want to look at ACS data regarding commuting patterns within a 0.25-mile radius of Esri Headquarters. You can generate the statistics and view the data in Business Analyst’s Commute Profile infographic:

In Business Analyst, ACS data can also be used in workflows such as Smart Map Search and creating threshold areas.

Can Living Atlas ACS layers be brought into Business Analyst?

Is ACS data for Puerto Rico available in both products?

Like in the U.S., the ACS variables that are made available in Puerto Rico for the two platforms are a bit different.

Do I get the ACS margin of error (MOE) values in both products?

Yes. All variables in Living Atlas are presented with their associated MOE value, as shown in the map below:

See Living Atlas’s blog article, The Importance of Margins of Error and Mapping, which features in-depth information on margins of error for more information.

In Business Analyst, the MOE values are available as well, appearing in color-coded maps, attribute tables, and in some reports and infographics.

Do I get custom ACS calculations in both?

Yes, Esri provides custom calculations using ACS data in both Living Atlas and Business Analyst. Again, they may not be the same between products, but there can be overlap.

In Living Atlas, these calculations include pre-calculated percentages, ratios, and totals. These can be identified from the field name containing the string “_calc_” in it. Below is an example where Living Atlas has calculated the number of renters paying over 30% of their household income toward rent. The variables used in the custom calculation are shown in the metadata.

Which ACS variables are in Living Atlas?

The Living Atlas FAQ page has a question “Can I see a full list of all the feature layers and what ACS tables they pull from?” which can be a great first-check to see if a topic or specific variable you’re interested in is offered in Living Atlas.

Which ACS variables are in Business Analyst?

To view the ACS variables in Business Analyst, open the data browser and in the Refine results pane, under Dataset, select ACS only.

The full set of Business Analyst ACS variables can also be accessed in Excel or PDF format.

When browsing the data, you can view information like reliability calculations and hover over the Info icon to view metadata and descriptions as shown below. The ACS variables in Business Analyst also feature an easy-to-understand alias name that Esri creates. For example, ACS variable B01003_001 (Total Population) has a variable name of ACSTOTPOP.  This can be seen under the Variable section in the pop-up box.

Note that the set of ACS variables available in Business Analyst also appears in other products, such as ArcGIS for Microsoft 365 and ArcGIS Community Analyst.

What does this mean for me?

Where can I find more ACS resources?

We have many resources on using ACS in both Living Atlas and Business Analyst.

We hope this information is useful for your ACS journey!

Stacy is a Product Engineer on the ArcGIS Business Analyst software release team. 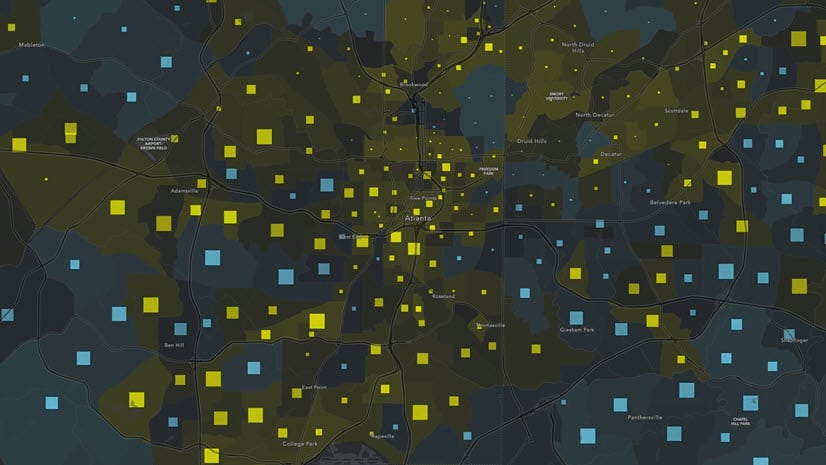 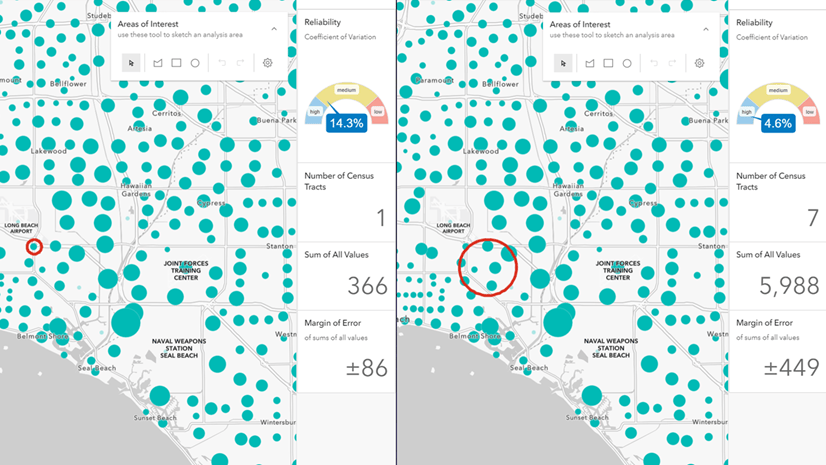 Get a quick sense of how much you'll have to aggregate tracts together to get a reliable American Community Survey estimate. 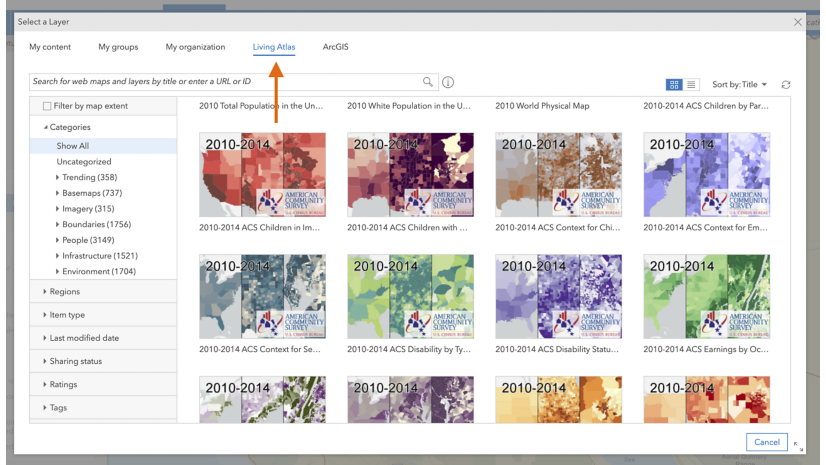 How to Use ArcGIS Living Atlas Layers in ArcGIS Business Analyst